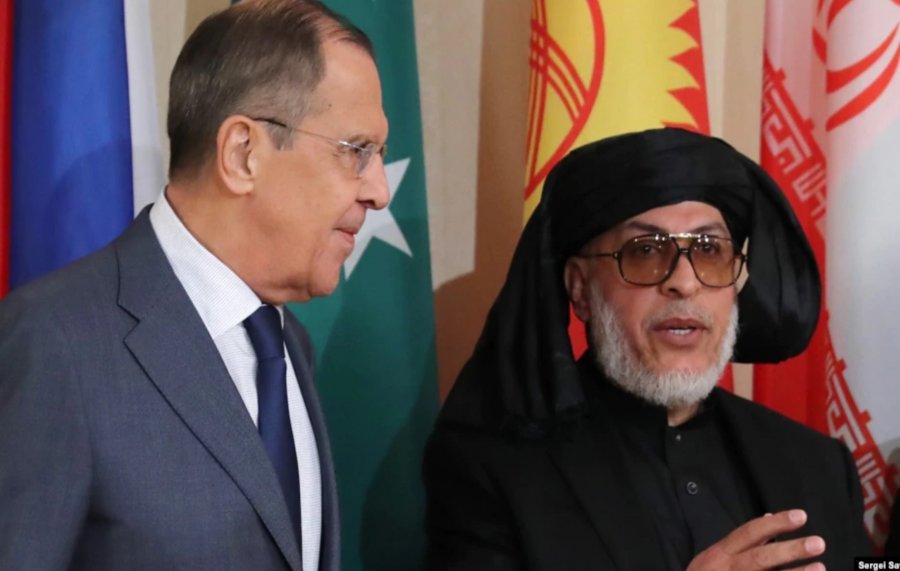 For Russia there are terrorists and ‘terrorists’ – those like the Taliban, whose terrorist objectives and behaviour receive international condemnation.  Then there are those whom Russia alone persecutes on terrorism charges, without any evidence of terrorism having ever been provided.  Both are officially terrorist because of the same Russian Supreme Court ruling in 2003.  That ruling, however, does not prevent Russian Foreign Minister Sergei Lavrov fraternizing with Taliban leaders and the latter sending high-level delegations to Moscow.  The ruling is, however, the only excuse for mass arrests and ‘trials’ of Crimean Tatar and other Ukrainian Muslims in occupied Crimea and for sentences of up to 20 years and more.

Officially, the latest Taliban delegation to Moscow arrived on 8 July to assure Russia that the Taliban’s armed advance and seizure of huge parts of Afghanistan do not threaten Russia’s interests.  Lavrov has, however, been welcoming delegations of terrorists since at least 2019, with the outcome of their negotiations unknown.  This cooperation has, in fact, just prompted Marina Litvinovich, a well-known Russian human rights activist and one of the very few opposition figures allowed to take part in the coming Russian parliamentary ‘elections’ to lodge a formal complaint with the Central Election Commission.  She objects to Lavrov’s inclusion in the federal part of the list of candidates due to his numerous cases of collaboration with the Taliban movement which is recognized and banned as terrorist in Russia.

Crimean Tatar rights lawyer, Emil Kurbedinov has also commented on Russia’s double standards and drawn attention to the reasons given by the Russian Supreme Court in its Ruling on 14 February 2003.  The secrecy around that ruling has been criticised by human rights NGOs, such as the Memorial Human Rights Centre, since organizations like the peaceful transnational Hizb ut-Tahrir were deprived of any right to object to the designation and / or to lodge an appeal.

Some of the organizations listed, including the Taliban, are undoubtedly terrorist, and the Supreme Court’s justification falls within the definition of terrorism as per Russian legislation.   In the case of the Taliban, the list of grounds could certainly be considerably longer, but the ruling mentions the movement’s  links with unlawful armed formations active in Chechnya and points to its use of methods of terror, such as the hijacking of a Tatarstan plane and holding of hostages in 1995.

One of the many reasons why the Memorial Human Rights Centre recognizes as political prisoners all those convicted merely of ‘involvement in Hizb ut-Tahrir’ is that the Supreme Court in no way provided justification for calling the movement ‘terrorist’.  It states that Hizb ut-Tahrir has as its objective the removal of non-Islamic governments and establishment of a world Caliphate, with this initially in regions with a predominantly Muslim population (which the Supreme Court says includes Russian and other CIS countries).

Lest this sound in any way alarming, the Supreme Court goes on to explain that Hizb ut-Tahrir’s main forms of actively are what it calls “militant Islamic propaganda, combined with intolerance for other religions; active recruitment of supporters; deliberate work in creating division in society (mostly propaganda, with powerful financial backing”.

In short, nothing that remotely fits Russia’s definition of terrorism.  Hizb ut-Tahrir is legal in Ukraine, and most other countries, and is not known to have committed acts of terrorism or violence anywhere in the world. Until 2016, Russia was the only country to call the movement ‘terrorist’.  The fact that it has now been joined by the repressive regime of Uzbekistan, which had long persecuted members for their faith, hardly makes the label any the more credible.

Since 2015, Russia has been using the Supreme Court ruling as justification for armed operations, arrests and ‘trials’ of Ukrainian Muslims in Crimea, the vast majority of whom are Crimean Tatars.  Since the second wave of arrests in February 2016, it has targeted civic and human rights activists and civic journalists, with the repression clearly aimed at silencing those who report on repression in occupied Crimea.  Russia effectively abandoned any pretence in October 2017, and then in a huge operation, mainly on 27 March 2019, arrested 25 Crimean Tatar civic journalists and activists.

Over 80 Ukrainian Muslims are illegally charged under Russian ‘terrorism’ legislation, either with ‘organizing’ a Hizb ut-Tahrir group, or with involvement in one.  Since the arrest of human rights activist Emir-Usein Kuku and five other recognized Amnesty International prisoners of conscience in February 2016, it has become standard for the FSB to add the charge of ‘planning an armed uprising’, with this also based purely on some theoretical idea about the future aims of Hizb ut-Tahrir.

Although the charges are always identical, the sentences have been becoming longer and longer, with the 25 civic journalists and activists now ‘on trial’ facing sentences of up to 20 years’ imprisonment.  This is without any crime or evidence that a crime was planned, and without any proof that the men had any involvement in Hizb ut-Tahrir.

The Russian FSB uses illicitly taped conversations about religion; politics, including Russia’s annexation of Crimea and its mounting persecution of Muslims; about bringing up children, etc. as alleged ‘evidence’.  These are sent to so-called ‘experts’ who invariably claim that the use of a certain word, for example, is ‘proof’ of involvement in Hizb ut-Tahrir.

The ‘trials’ are also based, almost exclusively, on the ‘testimony’ of anonymous witnesses.  There is no attempt to provide reasons for keeping these individuals’ identity secret and no way of verifying their words.  ‘Judges’ at the Southern District Military Court in Rostov (Russia) always reject applications for the men’s identity to be revealed and ignore glaring discrepancies and, for example, the fact that their testimony changes in line with changes in the indictment.

Russia has brought immense suffering to a huge number of families in occupied Crimea (as well as in its own country), with the FSB using such fake ‘terrorism’ charges to doctor their own statistics and claim ‘success in fighting terrorism’. That is while Moscow fraternizes with several terrorist organizations, including the Taliban.

A list of all the above-mentioned political prisoners and others can be found here: