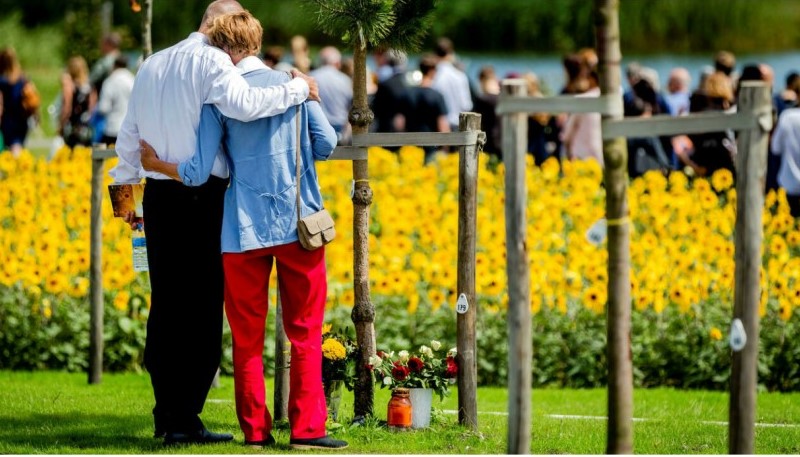 Moscow has failed to react to the recent moving plea from relatives of the 298 MH17 victims, killed by a Russian Buk missile on 17 July 2014.  After seven years of denial, disinformation and incriminating attempts to manufacture ‘alternative versions’, this cannot, perhaps, be viewed as surprising, but it is looking increasingly futile.  As the authors wrote, Russian President Vladimir Putin is, through such denial “challenging proven facts” and he most certainly knows it.

Unable to deny the preponderance of Russians among the militants who seized control of parts of Donbas in the Spring of 2014, Moscow has always pushed the narrative that these were individuals who chose, out of concern for Russians / Russian-speakers to come to Donbas.  During one of the first preliminary hearings in Ukraine’s case against Russia at the UN’s International Court of Justice [ICJ], a Russian representative claimed that the militants’ huge stock of military hardware and ammunition had been “found in unused Donbas mines”.

Although the trial now underway at the District Court of the Hague is officially of four individuals, three of them Russian and formally ‘ex’ FSB or Military Intelligence [GRU], virtually every hearing has demonstrated the degree to which Moscow was directly involved in the conflict in eastern Ukraine and in making key decisions.  While the defendants are accused over their believed role in obtaining and transporting the Buk missile launcher, the latter was supplied from a Russian military unit after urgent calls to ‘Moscow’.  The significance of that fact, and the enormous weight of evidence to prove such involvement in the form of intercepted phone calls; witness testimony; satellite images, etc. will surely be noted, and used, in the inter-state case brought by Ukraine and the Netherlands v. Russia at the European Court of Human Rights, and Ukraine’s claims against Russia both at ICJ and at the International Criminal Court.  This is of critical importance, for example, in demonstrating the degree to which Russia wielded effective control over occupied Donbas and in refuting the claim that the conflict in that area was a ‘civil war’.

All four men are being tried in their absence, with the three Russians all until very recently officers of Russia’s GRU [military intelligence] or FSB.  Igor Girkin helped Russia seize control of Crimea in February – March 2014, before leading a highly-trained group of militants, most from Russia which seized control of Sloviansk in the Donetsk oblast on 12 April 2014.  At the time of the MH17 downing, he was the ‘military commander’ of the self-proclaimed ‘Donetsk people’s republic’ [‘‘DPR’].  He was, until late 2013, a Russian FSB colonel.  The other Russians are his deputy in ‘DPR’ Sergey Dubinsky, a ‘former’  Russian GRU officer and Oleg Pulatov, a ‘former’ GRU spetsnaz officer. The fourth defendant is Ukrainian militant Leonid Kharchenko.

Only Pulatov is ‘taking part’ in the trial via Dutch defence lawyers.  The latter’s main role thus far has been to lodge countless applications for ‘additional investigation’, probes of ‘alternative versions’, etc.  It seems likely that Pulatov was informed that he ‘wished to defend himself’ and that the Russian state is paying the lawyers, with the suspicion strong that the aim is merely to drag out the proceedings.

The substantive hearings began on 7 June 2021, with seven all-day hearings.  There is now a break until 6 September when the relatives of the 298 victims, who included 80 children, will be addressing the court.

Although Pulatov’s defence lawyers have repeatedly lodged applications for additional investigations, they have not provided any evidence to back his denial of involvement.

The Court examined several ‘alternative explanations’ for the MH17 disaster, with most such versions originating in Russia, and all rejected for objective reasons. The trial at present is only of the four men, however it is to be hoped that the other international courts will give their attention to the suspect manner in which ‘alternative versions’ have been fabricated.  The same applies to other methods used, such as the Russian Twitter operation over the first 24 hours or so after the disaster during which mainly Russian Internet trolls posted a record 65 thousand tweets, all endeavouring to blame Ukraine for MH17.

The Court heard an extraordinary level of detail about the movement taken by the Buk missile system (referred to as BUK-TELAR} both during the night before MH17 was downed, and immediately afterwards (when the system was hurriedly taken back across the border into Russia).  The Joint Investigation Team (JIT) formed by the Netherlands; Ukraine; Australia; Belgium and Malaysia had already concluded back in May 2018 that the Buk missile system had come from the 53rd Anti-Aircraft Missile brigade, a unit of the Russian army from Kursk in the Russian Federation.  The evidence produced in court of the Buk’s movements include visual materials; intercepted telephone conversations; transmission mast data; witness statements and more.  Both Dubinsky and Pulatov had earlier denied any knowledge at all of Buk missiles, with this clearly refuted by intercepted calls.

JIT have concluded that from the middle of July 2014, there was a coordination headquarters dealing with the so-called ‘Donetsk and Luhansk republics’ in Krasnodar (Russia).  This was headed by Russian Colonel General Nikolai Fedorovich Tkachev [nom de guerre ‘Delfin’], with the latter directly subordinate to the Russian Defence Minister Sergey Shoigu.  The headquarters were staffed by Russian military officers.

Much of the material presented demonstrates how the defendants were desperate to get their hands on serious weapons, and actively sought the swift delivery of the Buk.  As mentioned, this is, from the point of view of the charges against them, incriminating, but does not explain why such a weapon of war was handed over to them.  According to the prosecution, on 11 July Alexander Borodai, another of the Russian leaders of this supposedly ‘Ukrainian separatist republic’ called “the President’s advisor”, i.e. Vladislav Surkov.  JIT have witness testimony that the efforts by Girkin & Co. to get the Buk missile system went via  Borodai to Russian military headquarters.  One such witness speaks of the “Russian authorities, in particular GRU” having been behind the operation to deliver the Buk missile system.

Moscow will undoubtedly have been following the JIT investigation with mounting alarm.  The investigation is ongoing, with JIT, in November 2019, having revealed a considerable amount of damning evidence in what was presented as an “MH17 Witness Appeal”.  The proof made public then already indicated the key role Russia had played, and more testimony has clearly emerged since.  There are witnesses who were near the site where the Buk surface-to-air missile was launched, as well as several people who have testified to knowing that the missile system was in the area.

It is worth noting that back in March 2020, the Dutch prosecutor stressed the need for certain witnesses’ identity to remain secret given Russia’s track record of state-organized killers in Qatar; the UK; Germany; Turkey and Bulgaria. Details of such witness testimony was provided back in June 2020.

Russia’s release of 35 Ukrainian political prisoners and POWs in September 2019 was almost certainly in order to get Vladimir Tsemach, MH17 witness (and possible suspect), away from the Dutch prosecutor.  The Kremlin’s insistence on such an ‘exchange’ of 35 Ukrainian citizens for another Ukrainian citizen was already suspicious enough, and became even more incriminating when he was swiftly sent to occupied Donbas despite the Dutch prosecutor’s extradition request.  Judging by the other evidence, it looks as if the efforts were in vain.

Back in 2017, Russia expended great effort in trying to persuade the UN’s International Court of Justice that the latter did not have jurisdiction over Ukraine’s claims of violation of two UN conventions -  the International Convention for the Suppression of the Financing of Terrorism and the International Convention on the Elimination of All Forms of Racial Discrimination.  It failed, and seems now to be trying mainly to drag out the proceedings for as long as it possibly can. The downing of MH17 will certainly be a major part of the case over the financing of terrorism.

In December 2020, the Prosecutor of the International Criminal Court, Fatou Bensouda stated that she had found reasonable grounds for believing that war crimes and crimes against humanity, falling within ICC jurisdiction, had been committed both within the context of the conflict in Donbas and in Russian-occupied Crimea.  Any ICC investigation will take years, but must surely include accountability for the downing of MH17.

In November 2020, the ECHR Grand Chamber announced that it was combining Ukraine’s inter-state case against the Russian Federation over its actions in eastern Ukraine with two other cases, most importantly, that brought by the Netherlands against Russia over MH17. In announcing its decision “to bring Russia before the European Court of Human Rights for its role in the downing of Flight MH17” back on 10 July 2020, the Dutch Government had promised that it would be sharing all its information about the disaster with the Court in Strasbourg.  It also stressed that “by submitting this inter-State application, the Netherlands stands by all 298 MH17 victims, of 17 different nationalities, and their next of kin.”

The Grand Chamber hearing into this crucial case, referred to as Ukraine and the Netherlands v. Russia is scheduled for 24 November 2021.