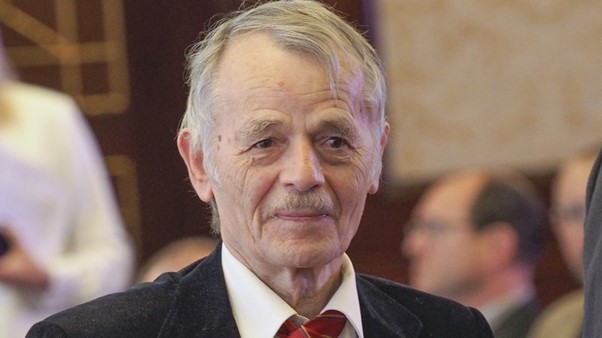 A Russian-controlled court in occupied Crimea has summoned Mustafa Dzhemilev to the next ‘hearing’ in Russia’s surreal trial of the veteran Crimean Tatar leader and Ukrainian MP.  The summons is especially absurd not only because Russia banned Dzhemilev from his homeland soon after its invasion in 2014, but also because the trial is precisely over Dzhemilev’s attempt to enter his homeland back on 3 May 2014.  Is this just chaos in Russia’s state bodies, Dzhemilev’s lawyer Nikolai Polozov asks, or evidence “of profound state dementia, if not schizophrenia?”

While Russia has no chance of enforcing Dzhemilev’s likely ‘sentence’, this judicial travesty certainly warrants international attention, not least because of the details it has brought to light about the ban imposed on the Crimean Tatar leader and the overt and dangerous provocation on 3 May 2014.

Mustafa Dzhemilev has spoken many times of how he was contacted and showered with compliments and assurances by Russian President Vladimir Putin soon after Russian soldiers without insignia invaded Dzhemilev’s homeland. Dzhemilev told Putin he had made a huge mistake and demanded he remove the troops. After a repeat attempt, this time using the Kremlin-loyal head of Tatarstan, Mintimir Shaimiev, Putin turned to repression and, soon afterwards, hostage-taking (with Dzhemilev’s son imprisoned in Russia for over three years).

Born on 13 November 1943, Mustafa Dzhemilev was just six months old when Stalin ordered the Deportation of the entire Crimean Tatar people.  He later spent 15 years in Soviet labour camps for his peaceful struggle for the right of the Crimean Tatar people to return to their homeland and for human rights in general.

Having understood that Dzhemilev and the Mejlis, or self-governing body, of the Crimean Tatar people remained implacably opposed to Russia’s invasion and annexation, the Kremlin exiled Dzhemilev (and soon afterwards, the Head of the Mejlis, Refat Chubarov).

Since the insane trial now underway is over Dzhemilev’s attempt to cross the administrative border from mainland Ukraine to Crimea, it is worth recalling how the Crimean Tatar leader was informed that Russia was banning him from what it falsely called its territory.   He was thrust an unsigned scrap of paper when leaving Crimea on 22 April 2014, following his first visit to Crimea after the invasion.  High-level Russian officials claimed to know nothing about the ban, with this only changing on 2 May, when Dzhemilev tried to fly to Simferopol, via Moscow and was prevented from proceeding.

The Mejlis called on Crimean Tatars to come to Armyansk where Mustafa Dzhemilev would be arriving from Kyiv on that Saturday morning. Around five thousand people turned up.  Although the occupation regime used the gathering that day as the first pretext for politically motivated arrests and trials, there were no major clashes, although not for Russia’s want of trying.  Huge contingents of enforcement officers without insignia were amassed, very evidently planning to violently disperse the crowd.  It was for this reason that Dzhemilev, in consultation with members of the Mejlis who were present, decided to return to Kyiv in order to prevent bloodshed.

During the hearings underway at the Russian-controlled Armyansk District Court, numerous defence witnesses have testified about the events that day which, for example, Ali Ozenbash said had all the signs of “a planned provocation, aimed at inciting inter-ethnic enmity”.   He and many others have confirmed that Dzhemilev was all the time on ‘neutral territory’, although it has also been noted many times during the hearings that there were no clear signs marking Russia’s false claim that this was ‘their’ border, and, typically, the men in effective military gear did not have insignia.

It was first learned in January 2016 that Russia had issued an ‘arrest warrant’ against Dzhemilev.  Although the Russian-installed ‘prosecutor’ Natalya Poklonskaya did not state what these were over, lawyer Dzhemil Temishev did confirm that the main charge was under Article 322 § 3 of Russia’s criminal code (“illegally crossing Russia’s state border”).  It was claimed that he, as “a foreign national” knew that he had been banned from entering “the Russian Federation”.  This illegal crossing was purportedly carried out “by a group according to prior conspiracy”.

Attempts during the ‘trial’ now underway to prove that Dzhemilev had been informed adequately of the illegal ban have also fizzled with border officials brought in by the prosecution either ‘not remembering’ or else having only checked his passport in Moscow.  Even Russia’s second ban – until 2034 – was effectively issued secretly and only emerged through persistent efforts by Dzhemilev’s lawyer.  The initial ban was challenged through Russian courts, and is now awaiting examination by the European Court of Human Rights.

Dzhemilev is also accused of illegal purchase and possession of ammunition under Article 222 § 1 of Russia’s criminal code, and of carelessly storing a firearm, creating a danger to others, if that had grave consequences (Article 224 § 1).  The two latter charges are connected with a tragic accident in which Dzhemilev’s son, Khaiser accidentally shot and killed a person in May 2013.  Russia had no right to prosecute Khaiser Dzhemilev, and very clearly did so, imprisoning him in Russia itself, in order to put pressure on his father.  This was internationally condemned, however Khaiser was forced to serve an illegal sentence in a Russian prison to the very last day.

Even if Russia was not illegally applying its legislation over events that happened under Ukrainian law, the charges would still be a flagrant infringement as the weapons charges are long past the time limit allowed for such prosecutions.

The first announcement of an ‘arrest warrant’ against Dzhemilev was after the important Crimean Blockade initiated by Dzhemilev and other Mejlis leaders with specific human rights demands and after this was extended to energy.

The ‘criminal prosecution’ was then resuscitated in early 2020, together with equally prosecutions of Refat Chubarov and Lenur Islyamov.  Although all three had been involved in the Crimean Blockade, the reason in 2020 was very clearly the planned March on Crimea – the March of Dignity against Violence and Occupation which had been scheduled for 2 -3 May 2020.  The March needed to be postponed because of the pandemic, however Russia initiated the trials anyway.

The aim is clearly to use terms like ‘mass riots’ with respect to Crimean Tatar leaders and the Mejlis in the hope that they will stick.  In fact, Russia is simply incriminating itself, both because of the overtly political nature of the prosecutions and because of the sordid details they uncover.

The next hearing in Dzhemilev’s ‘trial’ is on 6 August.