Antonenko released from custody with Ukraine’s Sheremet murder trial arousing ever more doubtsInterior Minister Avakov accused of manipulating public opinion over Ukraine’s most controversial trial Who answers for Antonenko’s imprisonment if Ukraine’s trial over Sheremet murder collapses?Lukashenko plotted to kill Sheremet yet Ukraine has charged people with no motive for his murder Police summons for Briton who criticized Sheremet murder case as Avakov’s ‘public show’Yulia Kuzmenko released from detention as ‘proof’ of involvement in Sheremet murder increasingly in questionFour years since Pavel Sheremet’s murder: From ‘a matter of honour’ for Ukraine to any arrests will do?Ukraine taken to European Court over Sheremet murder trial by press conferenceEx-Kremlin hostage Sentsov calls out Zelensky over flagrant violations in Sheremet caseRadical shift in high-profile charges over killing of journalist Pavel Sheremet in UkraineUkrainian police search home of lawyer criticizing controversial Sheremet murder arrestsSheremet Murder: Lack of sufficient evidence admitted after suspects all but declared guiltyPresumed innocent until a police briefing in Ukraine. Doubts mount over Sheremet arrestsVital questions remain unanswered after Donbas volunteers arrested for murder of journalist Pavel SheremetJournalists & rights activists warn against continuing "real tradition of impunity" a year after Pavel Sheremet’s murderUkraine’s Security Service denies alleged link to killing of journalist Pavel SheremetPavel Sheremet: “You can’t be ready to be killed”A Year without Boris Nemtsov and of Sham InvestigationThe Same Fingerprints in the Killing of Nemtsov & PolitkovskayaInvestigators claim Boris Nemtsov killed for condemning Charlie Hebdo massacre
• Topics / The right to life
• Topics / Freedom of expression

Mother of slain journalist Pavel Sheremet: I don’t want innocent people to suffer for his murder 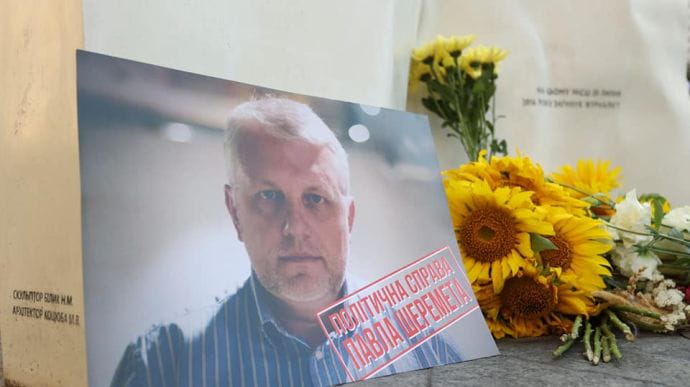 On the fifth anniversary of Pavel Sheremet’s murder, Ukraine’s new Interior Minister  Denis Monastyrsky has refused to speak with the slain Belarusian journalist’s family and friends.  A spokesperson claimed that this would be inappropriate until the trial now underway has ended.  This may well mean that Monastyrsky will never need to keep his promise to “draw conclusions about the work and quality of the law enforcement system” since at the rate the trial is going, it could be years before a verdict is reached.

In a moving interview given to Sevhil Musayeva, Chief Editor of Ukrainska Pravda, on the eve of the anniversary, Lyudmila Sheremet spoke of her son and of the belief they shared in the power of truth.  “I simply want him to be remembered.  To be remembered as a person who fought for justice and who carried through his entire life these words: “Power is not in force, power lies in the truth.” That it is impossible to kill the truth. You can kill, but it will still conquer.”

She was asked about the extremely controversial police briefing on 12 December 2019 which announced arrests and essentially claimed that the case had been solved.  During that briefing, Ukraine’s President Volodymyr Zelensky had said that many people had heard answers to their questions that day.  Asked if she personally had received such answers, Lyudmila Stanislavovna replied succinctly “No”. When the interviewer probed, she said: “what kind of answers?  If they charge people, if they arrest them, they need to have some very weighty grounds.  Yet people have been imprisoned for so long…  This has gone on for two years and it’s all the same”.  She is just saying, she continues, that she does not want innocent people to suffer.  She is following the trial, but it all goes so slowly, she often turns it off.  She points out that her lawyers are present.

According to Sevhil Musayeva,  Lyudmila Sheremet was among those wishing to see Monastyrsky who replaced Arsen Avakov as Interior Minister on 16 July. One widely held view about the press briefing on 12 December and the arrests made is that Avakov was facing enormous pressure to demonstrate ‘progress’ if he wanted to retain his post as Interior Minister. Covert confirmation of such a link was provided by President Zelensky on 20 May 2020 when he stated that Avakov answered for the Sheremet case and that he would make ‘staffing decisions’ if the case fell through.

In fact, Avakov lost his post in July 2021 for unrelated reasons.  Of the three defendants actually facing charges over Sheremet’s murder (as opposed to the five clearly implied during the December 2019 press briefing), two remain under full house arrest.  Paediatric surgeon Yulia Kuzmenko spent over eight months in detention; musician and military public relations officer Andriy Antonenko – almost 18 months.  Both remain unable to continue their work, and Kuzmenko stated during the very first court hearing that her career was effectively ended during the press briefing in December 2019 that named her as one of the suspected killers.  The third defendant, Yana Duhar, a military nurse, was first under house arrest, and was then released on bail.

Sheremet’s mother, Musayeva and others were hoping to meet with Monastyrsky and discuss the state of the case and various aspects of the investigation.  Musayaeva said that Anton Herashchenko, who previously worked closely with Avakov, that a meeting would be inappropriate and could be viewed as pressure on the court.  She said only that she hopes that this position will change.

In normal circumstances, one might agree that any such meetings with the head of the police who are responsible for the investigation could be viewed as interference.  The problem is that such concerns seem to have emerged far too late in the day, while the many questions that remain over high-level handling of the case remain unanswered.  It should be remembered that the investigators’ version presented at the press briefing changed quite radically six months later, and now includes unidentified individuals who are supposed to have “acting from a range of personal motives, decided to cause a high-profile event in society in order to then provoke numerous protests”. Monastyrsky cannot seriously believe that the task of identifying these mysterious individuals can also be delayed until the trial ends, nor that the slain journalist’s loved ones do not have a legitimate right to ask what progress is being made.

Of the prosecution’s 28 volumes of material, only 17 have thus far been read out in court.  There are also 262 ‘witnesses’ to be questioned, with the defendants’ lawyers and supporters asserting that the case is being deliberately dragged out.  It is not clear who these witnesses are, but they are certainly not eyewitnesses, nor indeed anybody whose testimony directly incriminates any of the three defendants.

As reported, the Interior Ministry press briefing on 12 December 2019 was attended by Avakov;  President Zelensky; the Prosecutor General at the time Ruslan Riaboshapka; as well as both the Head of the Police Ihor Klymenko and his Deputy Yevhen Koval.  Such high-level presence at a briefing announcing arrests was already extremely irregular, and the over disregard for the defendants’ right to the presumption of innocence was only compounded by the congratulatory addresses given by both Zelensky and Riaboshapka.

Details of the pronouncements made by these high-ranking officials can be found in the summary here of the application lodged by Antonenko’s lawyers with the European Court of Human Rights.  The defence alleges, among other things, violation of the right to a fair trial (Article 6) specifically over the egregious infringement of the presumption of innocence.  Avakov went even further on 13 December during the Savik Shuster Freedom of Speech talk show on television. As well as repeating information from the press briefing, Avakov also asserted that Antonenko had made a phone call before the search asking his brother-in-law to take an anti-personnel mine from his flat.  This was presented as further ‘proof of guilt’.

There are far too many worrying aspects to this case and glaring flaws in the case to feel happy with calls to await the end of a trial which is moving at snail’s pace.

The following outlines just some of the concerns.

Motive or lack of it

The initial motive as presented at the press briefing was first totally discredited when the accusation against Antonenko was found to have been copy-pasted from a different indictment written a year before Sheremet’s murder. It was then radically changed shortly after the above-mentioned Zelensky interview on 20 May 2020.

In the prosecution’s present form unidentified individuals are supposed to have planned the murder as a way of destabilizing the situation in the country and arousing protests.  There is nothing to explain why they should have thought this would happen (it did not).

It is unclear what motives any of the three defendants are supposed to have had.

This motive leaves out who Sheremet was and claims that he was the victim merely because he was a prominent figure.

Sheremet was a former Belarusian dissident and undoubtedly an enemy of the Lukashenko regime, as well, in all probability, as of the current regime in Russia.  He was also a hard-hitting journalist in Ukraine.  Only the Ukrainian police investigators appear to think that they have eliminated other possible motives for his murder.

In January 2021, a clear Belarusian lead came to light.  It was clear that the Ukrainian authorities were aware of the relevant tapes back in December 2020, yet only commented after information was published in Russian by an organization calling itself the Belarusian People’s Tribunal, and in English by EUobserver.

Details of the intercepted conversation and of the less than adequate reaction from the Ukrainian police here:

Manipulation of public opinion and discrepancies

Five suspects were spoken of during the original press briefing, including two military volunteers Vladislav and Inna Hryshchenko.  It was clearly stated during the briefing that it was the supposed similarity between the explosive device which the Hryshchenkos are accused of having used in a separate crime and the device used to kill Sheremet that led to Antonenko first being linked with Sheremet’s murder.

The Hryshchenkos have never been charged in connection with the Sheremet case, and both were released from custody long before Antonenko.

There are doubts about the ‘expert assessments’ on which the case appears to largely be based, including that from a British expert on so-called ‘forensic gait analysis’, Ivan Birch.   His opinion, whose validity in a case based solely on CCTV footage has only been presented in Ukrainian translation, without any indication of who the translator was and, most importantly, without the original. An application to have the original provided was rejected by the court on bizarre grounds.  The defence had asked to see it, in part to check the original against the translation.  The court, however, claimed that “these circumstances can be checked by other means, for example, through a study of the opinion of the expert; details regarding the commissioning of the relevant expert assessment and by questioning the expert in a court hearing.”  Such questioning should reveal any major discrepancies but at some unspecified time in the future.  Until then, the court is asserting, one can ascertain whether this is a bona fide representation of the English text by reading it in Ukrainian translation and by seeing what was commissioned.  At present, there is no real proof that there is an English original, with the alleged document waved about during a police video, but never provided for scrutiny. Forensic gait analysis is, moreover, of limited evidential value.  The Royal Society of Edinburgh, for example, states (in a ‘Primer for Courts’) that gait analysis from two videos cannot be based solely on those videos, but must be backed by other independent evidence of the person’s characteristic gait.  This is not the case here.

In March this year, Avakov, still in his capacity as Interior Minister, gave television interviews which were, at best misleading, at worst, aimed at manipulating public opinion.  The aim was clearly to prove that the police version was correct, and those accused of the crime – guilty (details here).

There are simply too many concerns about this case, including over the pace of the trial, for the new Interior Minister to now demand patience.