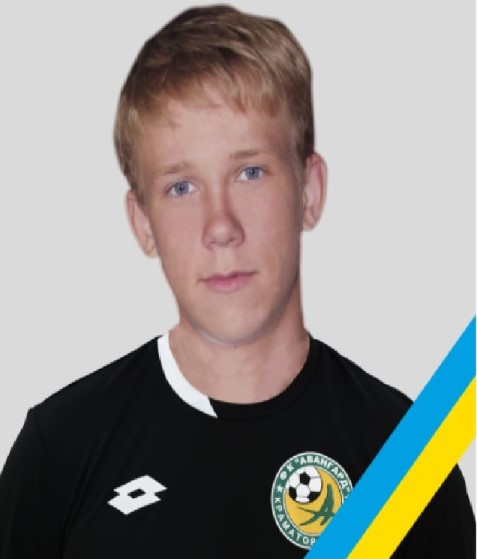 Stepan Chubenko Photo from the Avantgarde Football Team’s page devoted to their forever No. 1 Player

When Russian President Vladimir Putin repeats his mantra about Russians and Ukrainians being one people, he has a highly specific idea of what ‘one people’ means, as well as regarding which Ukrainians are to be viewed as ‘brothers’.  Passionate young Ukrainian patriots, like 16-year-old Stepan Chubenko, are almost certainly not included, unlike the pro-Russian militants who seized the Ukrainian schoolboy on 23 July 2014, before torturing him and then killing him in cold blood. Donbas militant ‘commander’ Vadim Pogodin is undoubtedly now a Russian citizen but was not back in 2017 when Russia refused to extradite him to Ukraine to face justice for his fully established role in ordering the torture of the 16-year-old and in then firing the final, fatal shots.  Russia is holding over 100 Crimean Tatar and other Ukrainian political prisoners who are not accused of any internationally recognized crime, yet refused to hand over a convicted murderer.  Quite the contrary, Pogodin is now receiving Russian public funding for contract work in occupied Crimea.

Stepan Chubenko was from Kramatorsk in the Donetsk oblast, one of the first cities to be seized by heavily armed militants led by Russian ‘former’ FSB officer Igor Girkin in April 2014.  He had studied up till then in School No. 12 where he took part in amateur theatre, wrote poetry and was interested in history. He was also passionate about football and was goalkeeper for the Kramatorsk Avantgarde youth team.  The team has permanently set outside the position of No. 1 player for Stepan Chubenko.  The young lad and friends were also involved in visiting a local children’s home, bringing nice things for the children and spending time with them.  According to his mother, children generally loved spending time with him.

Stepan had just turned 16 when the Euromaidan protests began in November 2013.  Neither he nor his parents had been interested in politics before, but Maidan changed that for him.  He began following events, reading different sources on the Internet and seeing beyond the propaganda coming from their television screens.  Stalina Chubenko makes it clear that it was her 16-year-old son who explained what was happening to them.

Attempts to prompt a so-called ‘Russian Spring’ in Donbas by local pro-Russian activists, with considerable help from Russian ‘titushki’ or paid thugs from across the border, began in earnest with the change of government on 22 February 2014, after President Viktor Yanukovych and his retinue fled Kyiv. Stalina Chubenko says her son’s stand was unwavering.

“He was unequivocally for Ukraine and its integrity.  There should be no flags of any other country here. He therefore threw himself into the struggle, into the partisan movement, rallies.  He was an active participant.”

The situation changed dramatically with the seizure of Sloviansk by Girkin and his well-armed fighters on 12 April and military response.  Stalina Chubenko was herself born in Russia, and the family had gone to the Rostov oblast in Russia for the Remembrance Days shortly after Easter (26-27 April 2014).  Styopa’s parents initially left him there, fearing for his safety in war-torn Kramatorsk.  He returned, however, at the end of May. His mother recounts: “”When they began reporting that bombing had begun, that it was dangerous here, he left there. He said I can’t sit like a rat in the rear when my parents and my country are in danger”.

He was at least in Kyiv, but then the militants retreated from Sloviansk and neighbouring Kramatorsk at the beginning of July and a couple of weeks later his parents decided it was safe enough for him to return.

It was not. The 16-year-old was seized by militants from Pogodin’s ‘Kerch battalion’ as he tried to pass through occupied Donetsk on 23 July 2014.  His parents received a call the following day saying he had been “arrested”.  Stalina went to Donetsk and stormed the offices of the main militants, including Alexander Zakharchenko.  Whether it was the young lad’s age or his mother’s Russian roots is not clear, but Zakharchenko did investigate and reported the next day that Stepan had been killed.

It is known that the militants stopped Stepan because of the ribbons in the colours of the Ukrainian flag on his rucksack and then also found a scarf from a Western Ukrainian football club that he supported.  He would not have tried to conceal his pro-Ukrainian views with this enough for three pro-Russian militants (Vadim Pogodin and his subordinates Yury Moskalev and Mikhail Sukhomlinov) to have tortured and murdered a 16-year-old lad.

Stepan was beaten in Donetsk, and then taken to a village outside the city where the militants, on Pogodin’s orders, tortured him..  Sukhomlinov was ordered to kill Stepan, who was on his knees, with his hands bound behind his back.  When Pogodin saw that he was still alive, he grabbed the gun and shot him.

It is important to stress that the Russian-controlled ‘Donetsk people’s republic’ carried out their own investigation and established the above facts and others.  Moskalev was even taken into custody and served a short sentence before fleeing to Russia.  Stalina Chubenko has learned that he was even detained in 2016 on an INTERPOL red notice, but Russia here too refused to hand him over to Ukraine. The report from the so-called DPR prosecutor  says that Pogodin told Sukhomlinov and Moskalev that Stepan was “a member of Right Sector, a participant in the burning of people in the Trade Union House in Odesa (a Russian propaganda lie), “and is also the bearer of other political and ideological views for which he should be shot”.

Stalina Chubenko described to Donbas.Realii how “three burly and armed men shot a tortured, unarmed 16-year-old boy, whom they’d tied up with the T-shirt he played football in over his head. During the exhumation, I saw my child with his hands bound with scotch tape”.  The militants told her that her son had not cried, and not asked for mercy.

As reported, news that Pogodin had been detained in occupied Crimea on 20 June 2017 elicited panic among ex-militants and ‘indignation’ that Russia was not protecting them.  In fact, Girkin’s prediction that Russia would not hand Pogodin over proved correct.

In November 2017, a Ukrainian court sentenced all three men in their absence to life imprisonment.

Russia has provided protection for all three criminals who tortured and murdered a child for his pro-Ukrainian views.  In May 2020, it was learned that Pogodin was once again working for Moscow, this time in occupied Crimea.  He had become the deputy director of the ‘Technologies and Restoration’ company and was getting money from the occupation authorities in Crimea and the Moscow government for repairs to streets, stairs, etc. in Crimea.