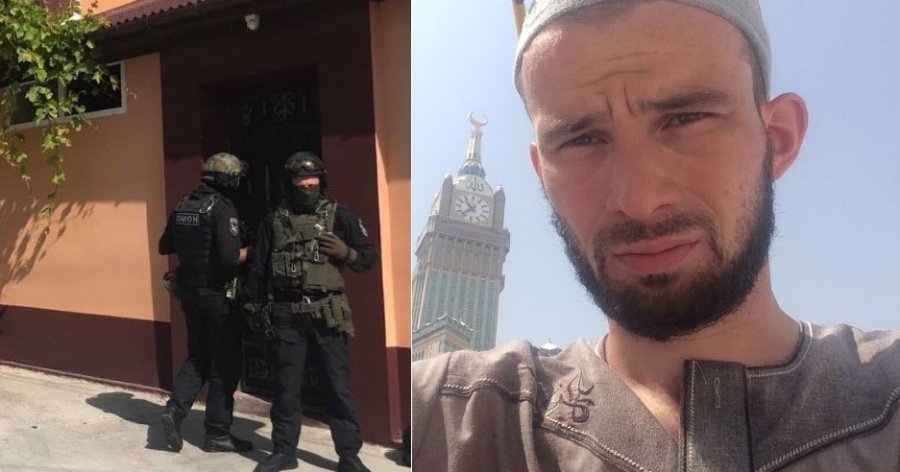 Russian-controlled enforcement officers in occupied Crimea staged yet another ‘operation’ on 22 July, this time targeting a Crimean Tatar family from Yevpatoria. The objective was clearly terrorization since the early morning armed search at the family’s home and their shop, during which two brothers were pinned to the ground, found absolutely nothing.  The sole result was that a third brother was taken away and imprisoned for three days over an image legally posted on the social network VKontakte back in 2013, well before Russia’s invasion and annexation of Crimea.

OMON and other officers, including from Russia’s notorious ‘centre for countering extremism’ turned up at around 9 a.m. on Thursday, and cordoned off the family home. They were soon forced to allow an ambulance doctor to enter, after Gulvira Ibragimova’s blood pressure rose dangerously.  She explained later that she had recognized several individuals, including the ‘investigator’ who had carried out a first such ‘search’ back in 2015.

The two lawyers who arrived very soon were, however, prevented from being present during the ‘search’ – a flagrant infringement of the victims’ rights that has become standard under Russian occupation.  There was thus no way of ensuring that procedure was being followed, including with respect to the official ‘witnesses to the search’ whom the enforcement officers almost certainly, in violation of the law, brought with them.  This is the second time that the Ibragimov family have been subjected to such an armed search, with the measures in 2015 claimed to have been “in search of weapons or explosives”.

Gulvira Ibragimova and her husband, Ali, have three sons, two of whom live in the same home with them.  One of them, Mustafa, was taken by the officers to the family’s shop where so-called ‘investigative measures’ were carried out and the third brother, Abdulla Ibragimov, who lives separately, was detained.

It is clear that nothing at all ‘illegal’, even by the Russian occupiers’ highly specific understanding of that term, was found during any of the searches on 22 July.  Nor, quite evidently, was anything found in 2015.

Instead, they took Abdulla Ibragimov away over an image on a a VKontakte post from 2013.   Later on Thursday, the Russian-controlled Yevpatoria City Court jailed him for three days under Article 20.3 § 1 of Russia’s code of administrative offences. The alleged ‘offence’ in this case was that on Ukrainian territory and under Ukrainian law in 2013, he had posted a symbol of Hizb ut-Tahrir , the peaceful transnational Muslim party which Russia prohibits, but which is entirely legal in Ukraine.  It was claimed that the date did not matter, as the post was still present on the page.  It is by no means an easy task to go back years through social media posts to ensure that there is nothing over which the Russian occupation regime could decide to prosecute you.

In fact, deletion of a post will not necessarily help.  In 2017, Crimean Solidarity civic journalist Remzi Bekirov was jailed twice for short periods.  The first time, he was one of 11 people detained – Marlen Mustafayev for a social media image from July 2014, and ten other men because they had stood out on the street and / or streamed news about the armed search underway in Mustafayev’s home.

Bekirov served the 5-day sentence, imposed without a lawyer present. A month later, on 30 March 2017, he was summoned to the ‘centre for countering extremism’, supposedly to collect the tablet which had been taken from him.

Instead he ended up detained and presented with a new administrative charge - ‘circulating extremist material’ under Article 20.29 of the Code of Administrative Offences.  The supposed extremist content was a reposted video clip about the ‘Prymorsky Partisans’, a vigilante group that targeted police officers whom they accused of brutality and corruption.  The repost itself was from 2009, thus far pre-dating Russia’s invasion.  It had also been on a VKontakte page which Bekirov had deleted earlier this year.  He was, nonetheless, jailed for a further three days.

Bekirov himself called the measures against him a message to all Crimean Tatars “that they should be frightened, not come out, not be active”.

This was a warning that Remzi Bekirov’s conscience did not allow him to heed. On 27 March 2019, Russia’s FSB came for him and 23 other Crimean Tatars, most of them also Crimean Solidarity civic journalists and activists.  The men are now facing sentences of up to 20 years on charges that have received international condemnation.