Czech Republic sentences Donbas fighter to 20 years on terrorism charges Czech gets 15 years on terrorism charges for fighting for Russian-controlled Donbas militantsCzech gets 3-year sentence for fighting in Donbas on side of Russian-controlled militantsLatvian resident sentenced to five years for Russian-paid fighting in DonbasRussian propaganda chief Kiselyov gets his nephew jailed in Germany for involvement in war in UkraineCzech national charged with terrorism after fighting for Russian-backed militants in UkraineBriton jailed on terrorism charges for fighting with Russia-backed militants in UkraineBriton charged with terrorism for involvement with Kremlin-backed militants in DonbasNot in Our Name: Journalist NGOs Should Condemn Propagandist Graham Phillips’ Torture StuntMaimed Ukrainian Hostage Finally Exchanged by Kremlin-Backed MilitantsKremlin-backed militants to put maimed and tortured hostage on ‘trial’Tortured Ukrainian ‘Sentenced’ by Kremlin-backed militants to 30 yearsDonbas militants could sentence Ukrainian hostages to death for ’spying’Kremlin-backed Donbas militants threaten to execute Ukrainian prisonersPraised on Russian radio for war crimes in Crimea & DonbasSloviansk torture, killings, execution orders, yet still no proper investigationFamilies of murdered hostages demand proper investigationMurdered in SlovyanskUS journalist released, others still held hostage in SlovyanskDonbas: abductions continue as Horlivka politician found murdered
• Topics / Terrorism 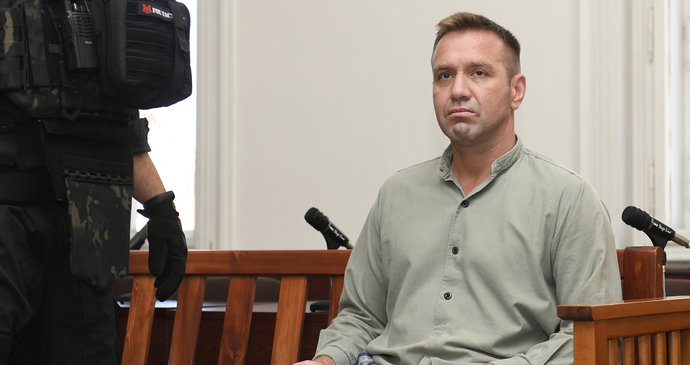 In a crucial ruling on 22 July 2021, the High Court in Prague massively increased the sentence passed on a Belarusian who fought for the Russian-controlled militants in Donbas.  The Court agreed with the Public Prosecutor that 41-year-old Alexei Fadeyev, who has lived in the Czech Republic for many years, was guilty of terrorism and increased the original four and a half year sentence to 21 years. There are conflicting reports as to whether the verdict is final, or can be challenged with the Supreme Court.  Fadeyev is currently serving a sentence for a separate crime, with the High Court also ordering that he be indefinitely expelled from the Czech Republic (presumably after serving the sentence).

This is a major move since the earlier ruling passed by Judge Lenka Cihlářová from the Prague City Court on 22 September 2020 had found Fadeyev guilty only of taking part in a criminal gang and had disputed the legal qualification of the crime as an act of terrorism.   This appears to have been in part because she did not feel that the prosecution had proven that Fadeyev actively took part in the fighting, something that he (like all those on trial, regardless of country) denies.  For that reason, she explained, she was using the version of the Czech Criminal Code in force prior to January 2017, with this being more favourable to Fadeyev.

The High Court was unconvinced.  Presiding judge Luboš Vrba stated that the first court had not paid sufficient attention to evidence, such as videos, showing Fadeyev firing an anti-tank missile or hurling a grenade at Ukrainian positions.  The Court thus agreed with the Public Prosecutor that Fadeyev had taken part in the fighting on the side of “the separatist groups in eastern Ukraine seeking to secede from Ukraine and create a separate state entity, the so-called ‘Donetsk people’s republic’”

The High Court concluded that this had been terrorism as set out in the current Criminal Code and that the upper limit of 14 years should be increased by one third.  Czech legislation now defines an act of terrorism as an act against the Czech Republic or an international organization, but also stipulates that Czech law shall provide protection for foreign states against acts of terrorism.   The Media Initiative for Human Rights spoke with legal specialist Kateryna Busol who stressed the importance of Czechia’s implementation of the principle of universal jurisdiction, making it possible to prosecute individuals according to Czech legislation for certain types of international crimes, regardless where these were committed. Ukraine has long been seeking for implementation of this principle by countries who have the relevant legislation (with this also including Germany and Switzerland) with respect to those who have fought on the side of the Russian-controlled ‘Donetsk and Luhansk people’s republics’. Busol hopes that Czechia’s example will begin to be followed by other European countries with respect to crimes related to occupied Crimea and Donbas.  While there are cases underway at the International Criminal Court; the UN’s International Court of Justice and the European Court of Human Rights, all are moving very slowly.  The same is largely true of cases in Ukraine.  Busol points to the obvious difficulties linked with the Ukrainian authorities’ lack of access to occupied territories, however there are cases where suspects can be tried yet where progress remains slow (the prosecution of Yevhen Brazhnikov on charges of torturing Ukrainian hostages at the notorious Izolyatsia secret prison in Donetsk and the trial of Roman Lyahin, the former ‘DPR’ ideologue who played a key role in the seizure of Izolyatsia.

As reported here, this is by no means the first time that the Czech Republic has taken such a firm stand against citizens or residents of its country who have travelled to occupied Ukraine effectively to kill Ukrainians, using weapons lavishly provided by Russia.

On 1 June 2021, 32-year-old Czech national Martin Kantor was sentenced, in his absence, to 20 years’ imprisonment, on charges of terrorism and involvement in a terrorist organization.  The sentence is not final, however Kantor’s whereabouts appear to be unknown.  According to the indictment, Kantor travelled to Donbas in 2015, via Rostov-on-Don in Russia.  In Donbas, he is believed to have had training and become a sniper for the so-called ‘Luhansk people’s republic’ [LPR].  He took part in fighting, and was promoted by the militants to the rank of ‘sergeant’.  Prosecutor Martin Bily, who asked for the 20-year sentence, explained that Kantor had been a member of a ‘reconnaissance and sabotage unit’ and had himself laid mines and grenade traps.

This was the second substantial sentence in just over six months against Czech nationals on terrorism charges for their role in Donbas.  On 21 December 2020, Oldřich Grund  was sentenced by the Ústí nad Labem  Regional Court on 21 December in absentia to 15 years.  Grund is believed to have been fighting in the self-proclaimed ‘Donetsk people’s republic’ since 2014 and to have received an award for what the militants claimed was ‘bravery’. First as commander’ of a combat vehicle and then, as a ‘lieutenant colonel’, of an armed tank unit, he fought against the Ukrainian Armed Forces in Sloviansk; Ilovaisk and in several other places.

If both sentences come into force, Grund and Kantor will face arrest in any EU or other democratic country, with extradition to the Czech Republic.

Fadeyev is the only person physically on Czech soil to have been convicted of terrorism, however this could soon change. On 22 April 2021, the Czech National Centre against Organized Crimea arrested five individuals on terrorism charges.  The arrests were described as a major crackdown on militant organization involved in supporting militants in Donbas fighting the Ukrainian government.

On 29 March 2019, a court in Riga sentenced 29-year-old Artem Skripnik to five years’ imprisonment and then a further two years’ parole for his role in the fighting in Donbas. The prosecution had asserted that Skripnik, a resident of Daugavpils with non-citizen status in Latvia,  had both taken part in the fighting in Luhansk during the Spring of 2015, and had trained other fighters to use weapons.  He thus “actively took part in an armed conflict directed against Ukraine’s territorial integrity.”

Skripnik’s sentence came a month after a regional court in Germany sentenced 48-year-old Sergei Kiselev to 2.3 years’ imprisonment for training to fight in the war in Donbas, with the evidence of his active part in fighting against Ukraine currently being studied by Germany’s Prosecutor General.

Like all the others, British citizen Benjamin Stimson also claimed to have been in Donbas “to drive an ambulance” and had never killed anybody.  His trial and five and a half year sentence are particularly important as the court in Manchester in July 2017 convicted Stimson under the UK Terrorism Act for taking part in the fighting in Donbas on the side of the Russian and Russian-backed militants.