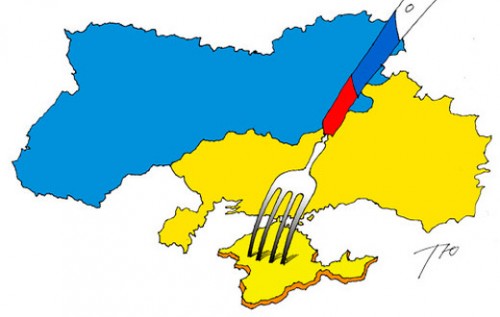 Ukrainian human rights monitors have identified almost four thousand victims of Russia’s plunder in occupied Crimea, with this including over 3,700 cases where people were stripped of their right to land.  This number is likely to grow following a new illegal decree in force since March 2021 forcing Ukrainians to take Russian citizenship or risk losing their homes in Crimea.

The Ukrainian Helsinki Human Rights Union and Regional Centre for Human Rights have documented the Russian occupiers’ violations of property rights in the latest of their ‘Crimea without Rules’ reports, with this one aptly titled ‘Occupied Property’.

Russia is continuing to prevent international human rights monitors from visiting Crimea, and Ukrainian citizens can find themselves arrested, like civic journalist Vladislav Yesypenko, on fabricated charges.  Under such circumstances, one of the main sources of information lies in rulings passed by Russian-controlled courts.  It was these rulings which enabled them to identify 3,984 victims of property rights violations – individuals in the majority of cases, but also a small number of legal entities.   3,728 had been stripped of their right to their own plots of land, while the remaining 256 had lost buildings which were damaged or removed by the occupation regime.  The vast majority of such cases (95.2%) were in occupied Sevastopol.  The authors of the report calculated that the occupiers had stripped people of almost half  a million hectares of land, however the real figure is likely to be much higher since about half of the rulings do not stipulate the size of the land which people are losing.

The report covers the period from the beginning of occupation in 2014 to 2019.  During a press conference held on 27 July, Roman Martynovsky explained that 70% of the Sevastopol cases that they had found were in 2017, and noted a particularly cynical ploy used by the Sevastopol occupation authorities.  The latter had contracted a legal firm, with the contract envisaging at least 2,500 law suits against individual owners of plots of land.  Since the law firm was paid by the ‘authorities’, this effectively meant that taxpayers were being forced to pay for many of those same taxpayers to be stripped of their property.

Another method of swindling people of their property involved Russian-controlled prosecutors and the Sevastopol city archives.  In response to ‘requests for information’ from these so-called prosecutions, archive staff provided documents claiming that the archives did not contain the originals of decisions by the relevant Ukrainian bodies confirming a person’s right to a plot of land.  Martynovsky explains that even though people could show original documents themselves which confirmed ownership, the occupation authorities claimed that there were no originals and issued decisions depriving people of the property.  This was the most widespread form of plunder, with the ‘court rulings’ essentially identical documents, merely copy-pasted, with different names added.

During the press conference, Maksym Tymochko from UHHRU spoke of the implications of the decree passed by Russian President Vladimir Putin on 20 March 2020, which came into full force on 20 March 2021  As reported, this illegal decree prohibits those falsely called ‘foreigners’ from owning land on approximately 80% of the peninsula, with the only exceptions being three regions without access to the Black Sea.  It should be stressed that the decree is in flagrant violation of the Geneva Convention relative to the Protection of Civilians , Article 53 of which is quite unequivocal that:

This is another way of forcing Ukrainians who have refused to take the aggressor state’s citizenship to do so, since otherwise they now face being treated as ‘foreigners’ prohibited from owning their own land in occupied Crimea.  Those forced to ‘sell’ their land under such conditions are likely to get a price significantly lower than the land’s real value and, in all likelihood, be driven from their homeland, since they will be unable to do anything but rent somewhere to live.

Tymochko estimates that the scale of this could be considerable.  Although the majority of victims (11,572) are Ukrainian citizens, around 12 thousand people in all are affected by the decree, with these also including nationals of 55 countries (mostly citizens of Germany; Armenia and the three Baltic Republics).

There are also people living in Crimea who have not re-registered their plots of land, as well as some 40 thousand people who left Crimea because of Russia’s invasion.  Since the occupation regime is carrying out so-called ‘inventorization’ of land, the number of victims looks set to rise significantly.