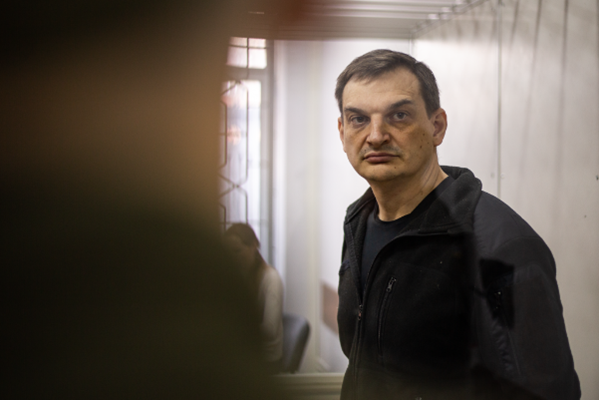 Over two years have passed since former Donbas militant ideologue Roman Lyahin was arrested, yet there is no sign of an end to his trial in Ukraine on treason; terrorism and separatism charges.  Judging by his reasons for preferring to remain in detention, Lyahin has provided the Ukrainian prosecutor with information not only about Ukrainian militants, but also about Russian military personnel and civilians involved in the conflict.  While such revelations doubtless place Lyahin and, perhaps his family, in danger, there are very many in Ukraine who have expressed concern that the trial is taking place behind closed doors.  for maximum openness.  They want to ensure that Lyahin does answer, particularly for his role in creating the notorious secret prison at Izolyatsia* which former hostages describe as a concentration camp.

Lyahin was arrested on 14 June 2019, seemingly when he tried to cross the administrative border from occupied Crimea to mainland Ukraine.  Judging from his lawyer’s comments during the detention hearing on 30 July, it is possible that he handed himself in although the first report from the then Prosecutor General Yury Lutsenko made no mention of this.

A Ukrainian from Donetsk, Lyahin appears to have initially believed in ‘Russian World’ ideology and, at the time of his arrest, was described as ‘ideologue’ of the so-called ‘Donetsk people’s republic’ [DPR].  He seems to have shared the fate of many such ideologically-motivated Ukrainian nationals and come into conflict with and been pushed aside by the new ‘leaders’ of this Russian-controlled entity. In the Spring of 2014, however, Lyahin played an active role in the creation of ‘DPR’ and in organizing and running a pseudo-referendum on 11 May 2014 (details of this overtly farcical event here)  He was referred to as the head of the ‘DPR central election commission’ and read out the alleged results of a stunt which was supposed, like the earlier ‘referendum’ in Russian-occupied Crimea, to provide justification for the illegal armed formations’ seizure of power.

It was only those events that formed the basis of the initial charges against Lyahin following his arrest by SBU [Security Service] officers.  He was accused of state treason (111 § 1 of Ukraine’s Criminal Code), with the other charges first initiated in 2014 over separatism (Article 110 § 1) and creating a terrorist organization  (Article 258-3 § 1) also added to the case.

Although the original trial was set to begin in September 2019, at the Shevchenkivsky District Court in Kyiv, there was delay after delay because a panel of judges could not be formed. At least six judges withdrew themselves from the case (possibly because of family living in occupied Donbas), while others could not take part because they had been involved in pre-trial hearings, or were on maternity leave, etc.

On 22 April 2021, the Kyiv Court of Appeal transferred the case to the Dniprovsky District Court in Kyiv, with this meaning the beginning of the trial from scratch.  Since the first trial had largely stood still, this is not necessarily a problem.  It is, however, as yet unclear whether the transfer will resolve the problems since the hearing on 30 July at the latter court was only about extending detention. During that hearing, the prosecution and defence were remarkably unanimous in wanting Lyahin to remain in custody and his trial to take place behind closed doors.  The argument for both measures is essentially the same – that Lyahin has relatives in ‘DPR’ and is giving incriminating evidence.  The court was told that some of these relatives have already received threats.  Although Lyahin’s lawyer, Oleh Astapov supported the extended detention for safety reasons, he made a point of refuting some of the prosecution’s arguments for holding Lyahin in custody, saying that his client would not try to abscond and had voluntarily handed himself over to the enforcement bodies.

There was anger from former hostages at the Izolyatsia secret prison and from the Izolyatsia Foundation over the decision in May 2020 to hold the hearings behind closed doors. This was compounded by the fact that, at that stage, there was nothing in the indictment about Lyahin’s role in seizing the former Izolyatsia Arts and Cultural Centre, together with other militants, and turning it into a secret prison, where hostages are savagely tortured.

Some heed was taken since on 1 June 2020, Lyahin was informed of a new charge, namely of violating customs of war by prior conspiracy with a group of individuals (Articles 28 §2; 438 § 1) over the seizure of Izolyatsia.  The Izolyatsia Foundation also succeeded in gaining recognized victim status in the trial.

The trial does, however, remain closed, with this making it difficult to monitor progress.

Back in September 2019, former hostages joined with the Izolyatsia Foundation in stressing the major role that Lyahin had played in the violent seizure of the Izolyatsia complex and its transformation into a secret prison of the so-called ‘DPR MGB [ministry of state security]’.  They were concerned that charges over this had been omitted since the torture and likely killing of Ukrainians at Izolyatsia constituted a quite different category of crimes, and, unlike political actions, linked with the pseudo-referendum, could not fall under any amnesty.