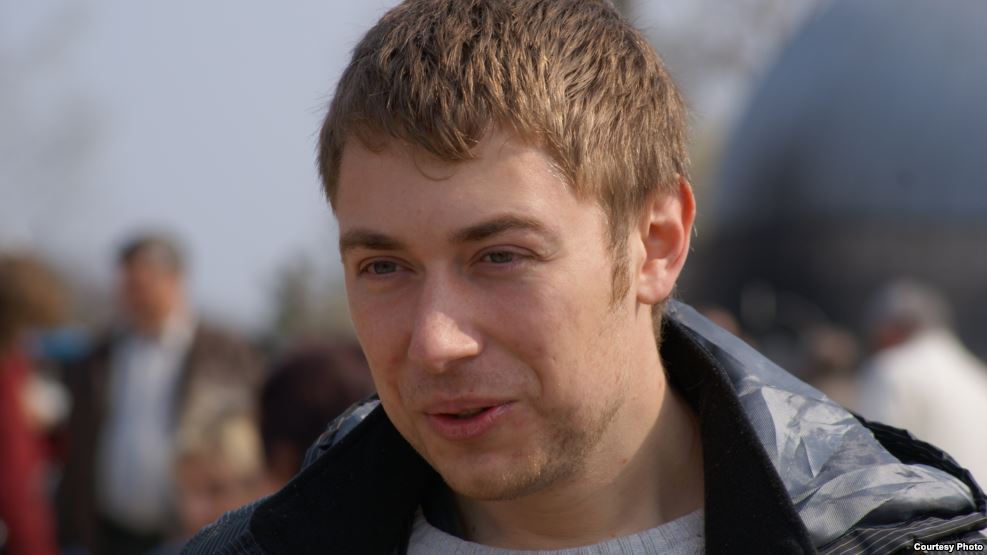 Back in July 2014, Alexander Bastrykin, the head of Russia’s ‘Investigative Committee’ claimed that history had given Russia “the right <> to come and get” those Ukrainians it accused of ‘crimes’.  Although the Ukrainian political figures Bastrykin mentioned have never suffered more than Russian propaganda attacks, the words cannot, unfortunately, be treated as comical ballast.  Since its invasion of Crimea, Russia has abducted and imprisoned a large number of Ukrainians, in several cases holding them incommunicado for many months and mercilessly torturing them to extract ‘confessions’ to non-existent crimes.  Among the victims of such savage lawlessness who remain imprisoned is former Maidan activist Valentin Vyhivsky, who is turning 38 on 3 August, having spent the last seven years in Russian captivity.

It remains unclear to this day what Russia charged Vyhivsky with, and why he has been held in such brutal isolation.  It does seem safe however, to conclude that the Russian FSB would not have hidden him at the Lefortovo SIZO [remand prison] for eight months, without access to an independent lawyer or Ukraine’s consul, and would not have used torture “as method of persuasion” had there been genuine allegations, backed by proper proof.

Vyhvsky had just turned 31 back in September 2014 when he was abducted from occupied Crimea.  Vyhivsky’s family were evacuated from Pypyat after the Chornobyl Disaster when he was just a toddler, and he grew up in Kyiv.  Although he is a graduate of the Kyiv Polytechnic Electronics Faculty, in 2014, he was earning a living by working in retail.  When not working or spending time with his five-year-old son, Vyhivsky satisfied his lifetime fascination with aviation by spending hours on the Internet, chatting with other enthusiasts, many of whom were in Russia.  It appears to have been one of these enthusiasts, a woman, who turned to Vyhivsky for ‘help’, claiming that she needed money for a relative’s cancer operation.  She asked Vyhivsky to meet her in occupied Crimea because her job in Russia meant that she would not travel to Kyiv.  At least two other Ukrainians (Stanislav Klykh and 19-year-old Pavlo Hryb) were seized, in Hryb’s case, abducted from Belarus after coming to meet female friends.  In Hryb’s case, his young friend was threatened with prosecution for ‘terrorism’ if she did not testify against Hryb, and it is possible that  something similar happened here.

What does seem quite clear is that the FSB were expecting Vyhivsky. He was seized at Simferopol Railway Station on 17 September and taken immediately to Moscow. Considering the fact that they were clearly targeting him, the FSB’s charges against the Ukrainian proved elastic.  He was initially charged under Article 183 of Russia’s criminal code with illegally receiving and divulging commercial, tax or banking secrets. This was later changed to the much more serious, and mysterious, charge of trying to gather Russian state secrets to pass on to the Ukrainian Security Service [SBU].

The first public statement from the FSB came in its report of Vyhivsky’s 11-year sentence, passed on 15 December 2015,  after Vyhivsky had been deprived of a proper lawyer and, clearly, placed under enormous pressure to plead ‘guilty’.  The FSB claimed that Vyhivsky had come to their attention in 2012 and was suspected of gathering information containing commercial secrets through bribes, as well as information containing state secrets in order to pass them to a representative of a foreign state.

During the initial eight months of enforced isolation, Vyhivsky had contact only with  Russian human rights activist Zoya Svetova, who had been approached for help by his parents.  She reported that Vyhivsky was clearly frightened and refused to say anything to her, even what article of the criminal code he was charged under.  Petro Vyhivsky has since explained that his son only opened out to Svetova after she passed on particular words from his father aimed at proving that she really was in contact with the family.

Vyhivsky is now held prisoner in the Kirov oblast in Russia, 70 years after his grandfather, a World War II veteran, was sentenced to 25 years under the notorious Article 54 (‘counter-revolutionary activities’ , ‘treason’) and imprisoned in the same oblast.  Stepan Vyhivsky served four years of a 25-year-sentence, and was then released together with vast numbers of political prisoners following the death of Soviet dictator in 1953.  Vyhivsky has now been imprisoned for much longer than his grandfather.

It was only after his mother’s visit in early 2018, when Vyhivsky was already serving the sentence, that she learned more about what he had originally called the “methods of persuasion” used – i.e. two mock executions in a forest; beatings and other torture methods used to extract his ‘confession’.   It is possible that this honesty was the reason that punishment after punishment began being imposed on trumped up charges, with this making it possible to hold him in solitary confinement and restrict such visits.  He is also prevented from having any real contact with other prisoners.

Seven years of solitary confinement has had a devastating impact on Valentin, and he is, understandably very close to despair. Please help to publicize his case, since only pressure on Russia can help secure his release and that of other political prisoners!