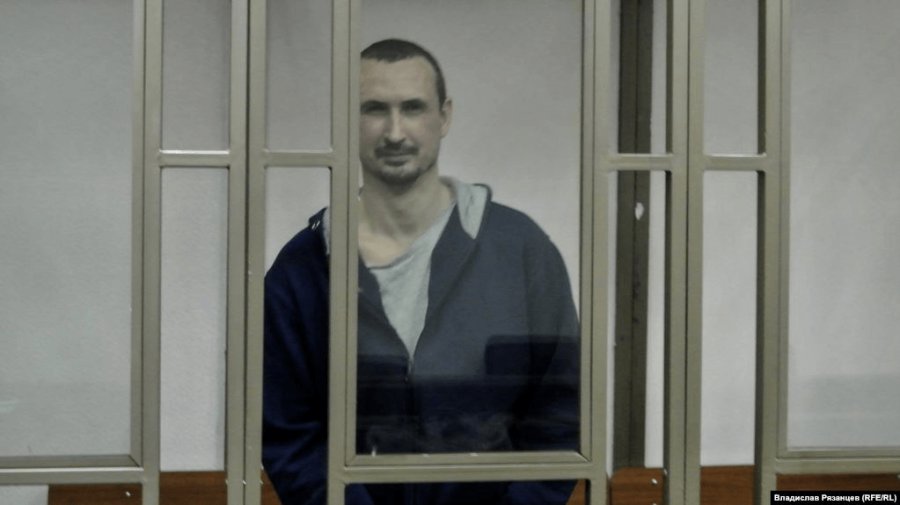 The Russian prison where Yevhen Karakashev is serving a 6-year sentence for civic activism and a social media post is trying to prevent Ukraine’s Consul from visiting the Ukrainian political prisoner from Crimea.  The claim that Karakashev is ‘Russian’ seems a cynical ploy given that Russia has made it next to impossible to survive in occupied Crimea without taking a Russian passport.  In this case, it is particularly brutal since Karakashev is imprisoned in Russia, far from his home, and his elderly mother is not up to the arduous journey.  The Consul, Taras Malyshevsky explains that it is her visit, allowed just once in six months, that he will be using in her place.

Malyshevsky told the Crimean Human Rights Group that Karakashev is being held in cell-like conditions with communication restricted.  He has been storming the prison colony with calls and promises to keep trying to get to see him.  He plans to travel to the prison colony in the Kabardino-Balkaria Republic (the Northern Caucuses) and will at least leave money which Karakashev can use to supplement the appalling diet of Russian penal institutions and, hopefully, buy envelopes and stamps (enclosing a blank envelope is always a good idea when writing to Yevhen and other political prisoners).

As reported, Russia worsened Karakashev’s prison conditions in November 2019 and placed him in a punishment cell, partly because he had refused to collaborate with the prison authorities.  At the time, his lawyer Alexei Ladin explained that he had twice been thrown into a punishment cell on his arrival at the prison colony just two months earlier, on 11 September 2019.  Both times, the pretext was some alleged infringement over clothing.

“In one case, the deputy head of the colony, Gabiyev presented him with a choice: sign an agreement to collaborate or he would write up an infringement of clothing rules and send him to a SHIZO [punishment cell].  Karakashev did not agree to collaborate. The second time he ended up in the SHIZO when he went out without his cap which had been washed and was wet.  He came out of SHIZO on 1 November, and on that same day there was a commission which imposed a year’s imprisonment in a prison-like cell.”

Since it is now August 2021, it would seem that similar methods have been used to keep Karakashev in these much harsher conditions.

Karakashev will soon (21 August) be turning 43, and has spent well over three years in captivity, first in Russian-occupied Crimea, then in Russia.  He is an anarchist activist from Yevpatoria and had earlier taken part in pickets demanding the release of civic activist Oleksandr Kolchenko, filmmaker Oleg Sentsov and other Ukrainian political prisoners.

He was arrested on 1 February 2018, just hours before public hearings into a controversial land development which he had vocally opposed.  The development went ahead, and Karakashev has been imprisoned ever since.  The men who burst into his home that day, forced him to the ground and handcuffed him before taking him away and holding him in police custody for a long time because he was able to phone a friend and ask for a lawyer to be contacted.  It is likely that his multiple abrasions and other injuries were sustained during that period.  The Russian-controlled police, however, refused to initiate proceedings over his injuries in custody.

After an extremely flawed trial held in the same Southern District Military Court in Rostov-on-Don that has become notorious for politically motivated verdicts against Ukrainian political prisoners, Karakashev was sentenced on 19 April 2019 to six years’ imprisonment, with a further ban on administering Internet websites for two years.