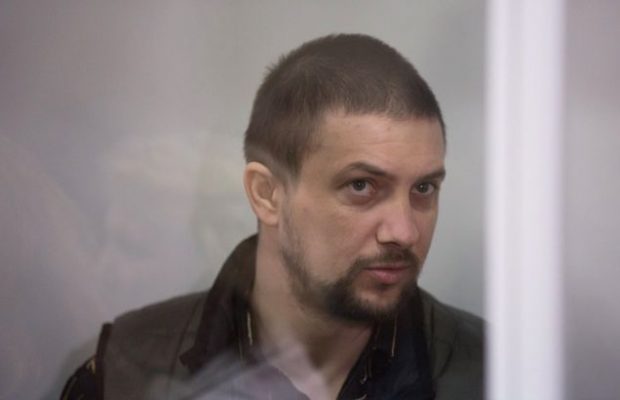 The District Administrative Court in Kyiv has allowed a claim by Oleksandr Marynchenko, one of the former Berkut officers accused of gunning down unaimed Maidan activists on 20 February 2014 and has reinstated him in Ukraine’s police force.  It appears, in fact, that Marynchenko was only very temporarily removed from the police force despite having been initially remanded in custody back on 14 February 2015, on suspicion of involvement in the gunning down of 48 activists on Instytutska St.

According to the Advocacy Advisory Board, whose lawyers are representing the families of victims, the court ruling was passed on 22 July.  Judge Natalia Shevchenko revoked the National Police order from 5 June 2020 which had dismissed Marynchenko on the grounds that he had not appeared at work, without a legitimate reason, since 29 December 2019.

Marynchenko is one of five ex-Berkut officers whose trial on charges of involvement in the above-mentioned killings was expected to end in 2020.  In December 2019, Marynchenko and Serhiy Tamtur were under house arrest, while Pavlo Abroskin; Oleh Yanyshevsky and Serhiy Zinchenko were in detention.  In a very contentious move, all five men were released on 28 December 2019 (officially, under a personal undertaking).  The following day, they were among the prisoners whom Ukraine handed over in exchange for hostages held by the Russian proxy ‘Donetsk and Luhansk people’s republics’ [‘D-LPR’].   The Russian-controlled militants are holding a very large number of Ukrainian hostages and POWs in occupied Donbas, and the protest over the men’s release was primarily about the timing, namely before the anticipated court verdict.  The assurances given by Ukrainian President Volodymyr Zelensky and the Prosecutor General that the trial was not being abandoned were viewed as empty promises.

In fact, the situation changed again when two of the men – Marynchenko and Tamtur – returned to government-controlled Ukraine in February 2020. Their return was announced by a lawyer who posted an appeal from them to Zelensky in which they claimed to be victims of ‘persecution’.  The whereabouts of the other three suspects remains unknown.

Citing the ruling, the Advocacy Advisory Report note that Marynchenko would seem to have been officially considered a  law enforcement officer right up till June 2020.  The ruling states that he was serving as inspector of a police sniper armed support unit until 7 November 2015 when he was given a special rank and assigned to the post of inspector of a special force police regiment in Kyiv. Six months later, on 17 May 2016, he was dismissed from that post, and added to the Central Department of the National Police.

Judge Shevchenko deemed that the disciplinary commission which had fired Marynchenko for not appearing for work without a legitimate reason had failed to take into account the period when he was under the control of ‘LPR’.  The ruling actually states that “Marynchenko effective became a hostage to inter-state political deals and a participant in a special operation to free Ukrainian POWs from territory temporary uncontrolled by Ukraine”.

Judging by Marynchenko’s claim, he had been fully paid until June 2020, and demanded compensation, including for court expenses.

Both Marynchenko and Tamtur were informed that they were suspected of killing Maidan activists in February 2015 and placed in detention.  Both men had been released under house arrest in the second half of 2019.

While all five men must, of course, be deemed innocent until proven guilty, the ruling’s description of Marynchenko’s activities as a Berkut office in 2013/14 is, at very least, startling.  He is described as having taken part in “measures to protect public order in the central part of Kyiv during mass disturbances”.

Even before the bloodshed on 18 and 20 February 2014, Berkut officers in Kyiv and other Ukrainian cities had used savage force against peaceful protesters.  It was, in fact, the brutal dispersal of young activists, many of whom were sleeping, on Maidan during the early morning of 30 November 2013 that aroused mass revulsion and anger and probably led to Euromaidan becoming the mass protests known as the Revolution of Dignity.

Although two of the defendants in the trial over 48 deaths on Maidan were now back in Kyiv, it still took until the beginning of June 2021 for the hearings to be resumed.  There are difficulties in any case where defendants are being tried in absentia, and these needed to be resolved before progress could be made.  On 20 October 2020, the Svyatoshynsky District Court in Kyiv Abroskin; Yanishevsky and  Zinchenko to be in hiding and ordered that they be placed on the international wanted list.

On 2 June 2021, the Svyatoshynsky District Court in Kyiv, under presiding judge Serhiy Dyachuk, gave formal permission for the three men in hiding to be tried in absentia.  The court then, however, combined those proceedings with the case against Marynchenko and Tamtur, which is now again moving, albeit from the beginning.