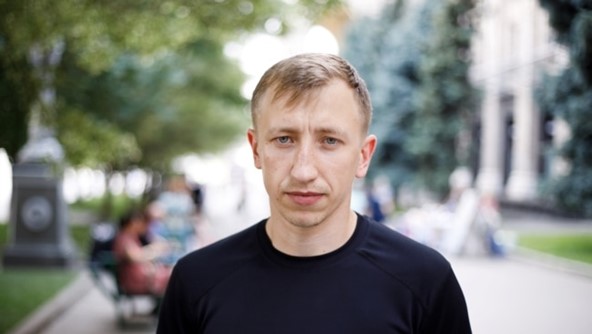 Ukrainian police launched a murder investigation on August 3 after missing Belarusian activist Vital Shyshou was found hanged in a park near his home in Kyiv.

Shyshou, who led a Kyiv-based organization helping persecuted Belarusians, had been reported missing by his girlfriend on August 2 after failing to return home from a run.

"Police have launched a criminal case under Article 115 of the Criminal Code of Ukraine (premeditated murder) and will check all versions, including the version of murder disguised as suicide," Ukrainian police said in a statement.

Shyshou had been found with abrasions on his nose and knee, but it was so far unclear whether he had been attacked, Ukraine's national police chief, Ihor Klymenko, told a briefing.

Belarusian strongman Alyaksandr Lukashenka has been waging a brutal crackdown since massive protests challenged his claim to a landslide reelection for a sixth presidential term in August 2020.

Many exiled opposition voices fled to Ukraine, Poland, and Lithuania.

Shyshou’s death immediately led to speculation of foul play amid growing concern that even Belarusians abroad are under threat from the tentacles of Lukashenka’s security apparatus.

Exiled opposition leader Svyatlana Tsikhanouskaya, who has used her Lithuanian exile to rally international support for Belarus’s pro-democracy movement, said she was "devastated" by Shyshou's death.

“It is worrying that those who flee Belarus still can't be safe. I'm thankful to [Ukrainian] authorities for launching an investigation into this case,” she said on Twitter.

EU foreign policy chief Josep Borrell said he was “shocked” by the death of someone who has helped so many flee the Lukashenka regime’s "repression.” He commended Ukraine for opening an investigation into the death, including “possible murder.”

Read our ongoing coverage as Belarusian strongman Alyaksandr Lukashenka ramps up pressure on NGOs and independent media as part of a brutal crackdown against protesters and the opposition following an August 2020 election widely considered fraudulent.

Shyshou's organization, Belarusian House In Ukraine, said on Telegram that its members were being watched by Lukashenka’s agents and various sources had warned of “provocations, up to abduction and liquidation.”

"There is no doubt that this is an operation planned by Chekists to liquidate a Belarusian who presented a true danger to the regime," the NGO said in a statement, referring to security service agents.

Shyshou's girlfriend, Bozhena Zholudz, told RFE/RL’s Belarus Service that he had "no reason” to commit suicide.

A fellow Belarusian House activist, Yury Shchuchko, was part of the search party that found Shyshou's body in the park.

He told Current Time, the Russian-language network led by RFE/RL in cooperation with VOA, that Lukashenka's security officials were known to be operating inside Ukraine and might be responsible.

"It is a usual [KGB security agency] scheme. The man was hanged with traces of beating on his face. Nothing is missing," Shchuchko said.

Shchuchko said Belarusian House members had been warned by Ukrainian authorities about "people from Belarusian special operations forces and other units coming to Ukraine to physically liquidate" them.

"The Security Service of Ukraine was also giving us such information," Shchuchko said. "They asked us to be cautious, because a network of Belarusian KGB agents is operating here, and anything is possible.”

Shyshou is originally from the southeastern Belarusian town of Rechytsa and moved to Ukraine in the autumn of 2020 following the crackdown on anti-government protests. He helped establish the Belarusian House In Ukraine.

With reporting by AFP, AP, and Reuters