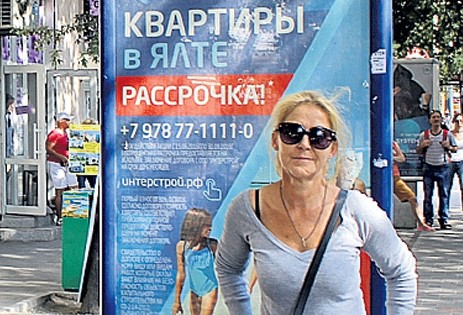 Lyudvika Papadopulu with the caption reading that she believes that an illegal seizure of land is underway in Yalta Photo eg.ru

A day after she was detained while trying to cross into mainland Ukraine, Yalta blogger Lyudvika Papadopulu has been placed under house arrest from 20.00 to 08.00, and has been prohibited from using the Internet at all. The measures could have been worse, since the ‘investigator’ had asked for full house arrest, however they appear as suspect as the ‘libel’ charge which Papadopulu is facing and evidently aimed at blocking her civic activism and generally silencing her.

Papadopulu was detained in the morning of 5 August by Russian border guards at the administrative border between Crimea and the Kherson oblast. She was held in a police holding centre overnight, before being taken to the Russian-controlled Kievsky District Court in Simferopol, where ‘investigator’ Anton Guly asked that she be placed under house arrest, claiming that she had been trying to flee from the investigators and had therefore been placed on the wanted list.  Her lawyer, Alexei Ladin reports that this is quite untrue and that Papadopulu had not been informed about any investigative measures. While ‘judge’ Andrei Dolgopolov rejected the application for full house arrest, the restrictions he imposed are extremely onerous. Papadopulu is prohibited from using either the telephone or the Internet; from communicating with witnesses and ‘victims’ in the criminal case, as well as being under a 12-hour night curfew.  Ladin told Krym.Realii that they will be deciding shortly whether to appeal against a “half-and-half, compromise” ruling.  While he did not elaborate, the restrictions are shocking, especially given that Papadopulu denies any involvement in the alleged ‘defamation’, but they could get worse.  Guly also has three days to appeal against the rejection of his application for full house arrest.  He has already taken part in the criminal prosecution of Gulsum Alieva, Crimean Solidarity activist and daughter of prisoner of conscience, Muslim Aliev, over an entirely innocuous reposted image, and was also involved in the politically motivated persecution of journalist Alexei Nazimov and pro-Russian politician Pavel Stepanchenko.

As reported, a search was carried out of Papadopulu’s home on 4 February 2021, with even the laptop which her son needs for his schoolwork taken away.  At the time, it was reported that she was officially a ‘witness’ in a criminal case over alleged defamation, however both she and Ladin were forced to sign non-disclosure commitments.  In informing of this, Ladin pointed out that the very fact that it had been demanded of them indicated that the investigators had something that they needed to hide.  It seems that she was summoned on 20 July for interrogation in connection with criminal charges.

Back in February, Ladin reported that the search had been carried out over a post on Facebook which was not written by Papadopulu and which she had not even ‘liked’.  “This is understand by the investigators, as represented by Anton Guly. In connection with this, it is clear that the search was aimed, not at removing ‘objects of crime’, but at putting psychological pressure on my client, the removal of all means of communications in order to ‘shut her mouth’.

There was also an attempt by people from Russia’s Investigative Committee and so-called Centre for countering extremism, to search the flat in Moscow where Russian civic activist Vladimir Garnachuk is registered.  Garnachuk is the head of the ‘Clean Shore. Crimea’ civic organization and also moderates a Facebook group entitled ‘Board of Shame for Crimean officials’ which is where the text, claimed to be defamatory, was posted.   He confirmed to Krym.Realii that he was facing criminal charges over supposed ‘defamation in the media or via the Internet’ (Article 128.1 § 2 of Russia’s criminal code).

Garnachuk wrote that the “formal initiator of the case is the director of the judicial department in Crimea, Kerim Akuyev who didn’t like what is written about him”.  Garnachuk, however, assumes that the real initiator is Sergei Aksyonov, the Russian-installed Crimean ‘leader’.  He suggests that Aksyonov “has decided to punish me a bit, and has taken Lyudvika Padadopolu as hostage”

The post in question was about the alleged seizure of the Parus sanatorium which Akuyev was involved in, together, seemingly, with Aksyonov. The post has now been deleted, but it apparently spoke of the seizure of the ‘property’ of a Yekaterinburg businessman Boris Bezrukov who (illegally) invested in the sanatorium following Russia’s invasion and annexation of Crimea.  Bezrukov himself blamed Akuyev, and a post appeared at least twice specifically naming Akuyev, who has claimed this was ‘defamation’, with criminal proceedings lodged on 5 October 2020.  The investigators are claiming that Papadopulu was behind the first post, Garnachuk – behind the second.  In fact, according to Graty, the investigators discovered that neither of these two posts were the original, and that the same text had appeared on 6 August 2019, posted by Ksenia Yakubets. The latter is not mentioned in the criminal proceedings at all, however she has told Graty that she simply doesn’t remember whether she posted the text.  She says that she has not been approached or questioned ad adds that she had begun receiving threats on social media and left Crimea.  She is now an American citizen living in the USA.

Presumably this is the reason that the ‘investigators’ are studiously avoiding addressing the fact that an identical text appeared before that being used as a weapon, to silence and intimidate Lyudvika Papadopulu.