Russian-controlled militants sentence 70-year-old pensioner to 17 years for ‘spying’ after torturing him and his familyUkrainians tortured and imprisoned in Donbas for supporting Ukraine, with Russia blocking their release Ukrainian hostage tortured with screws through the knees by Russian-controlled Donbas militants Donbas militants seize Ukrainian teacher trying to help her ailing mother Mother with grave health issues imprisoned by Russian-controlled militants for trying to save her sonA child when seized, Bohdan Kovalchuk has spent 5 years in Donbas militant captivity Russia uses abducted Ukrainians for propaganda video claiming Ukraine is bombing ‘liberated’ MelitopolRussia uses terror and abduction in attempt to force schools to collaborate in occupied Melitopol Russian invaders abduct 16-year-old son of a Zaporizhzhia regional head Russia plans total ‘filtration’ of Mariupol men and forced ‘mobilization’Russian Rule of Lawlessness in Occupied Crimea and DonbasPutin will continue attacking until Russia is stopped. Help Ukraine defend its freedom today!Russia kills Minsk Agreement, with lives of over 300 Ukrainian hostages and POWs in danger Russia is already holding many Ukrainian POWs without any declaration of warMajority of Ukrainians blame Russia for the war in Donbas and reject "special status" for Russia"s proxy Donetsk and Luhansk "republics"Russian proxy Donbas ‘republic’ threatens death sentence after torturing young father into ‘confessing’ to being a Ukrainian saboteur Crucial law adopted to help Russia’s Ukrainian political prisoners and hostagesUkrainian seized and tortured by Donbas militants after returning for his elderly mother Ukrainian accused of torturing hostages at Russian-controlled Izolyatsia secret prison flees to France and "asks for political asylum’Did ‘chief butcher’ of Izolyatsia secret prison in occupied Donbas work for Ukraine’s SBU?
• Topics / The right to liberty and security 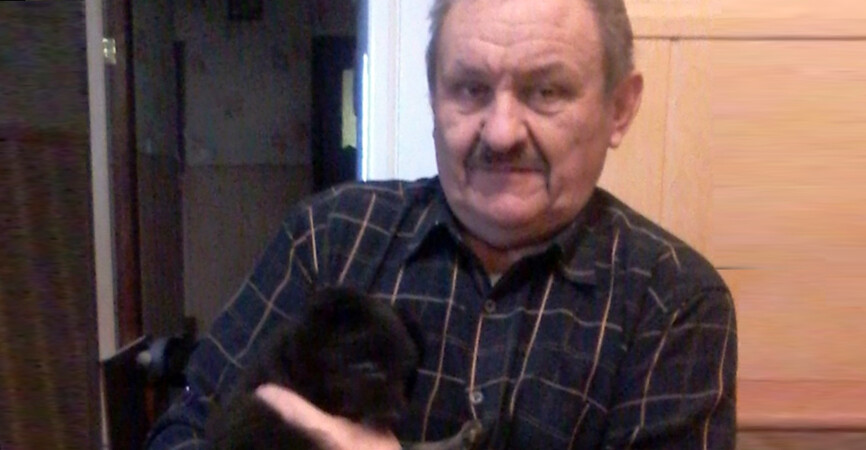 Vitaly Atamanchuk before his ’arrest’ in September 2019 Family photo

It is almost three years since Vitaly Atamanchuk was seized by militants from the so-called ‘Donetsk people’s republic’, together with his wife, Nadiya, and son, Oleh.  The 70-year-old retired miner remains in captivity, ‘sentenced’ to 17 years for supposed ‘spying for Ukraine’, with his very life in danger.

Atamanchuk’s daughter, Olena writes that a lawyer has recently been able to see her father, and reports being shocked by his appearance – he was much thinner, in very poor health and only able to walk on crutches. Heartbreakingly, he has clearly lost any hope of being released and told the lawyer that “the main thing is that my family are well”.

Olena writes that even this meeting was in the presence of two individuals and was also videoed.  No letters, documents nor even a copy of the so-called ‘court sentence’ could be handed over. “How they must fear my elderly 70-year-old father with his hip fracture that they can’t even leave him alone with his lawyer!”

There is little sense in pointing out that such treatment of a person with his lawyer is illegal, since absolutely nothing about Atamanchuk’s ‘arrest’; torture in detention and then ‘trial’ has any relation to law.  Atamanchuk was held in the Donetsk SIZO [remand prison] until January 2019 when his ‘trial’ began.  Olena knows only that there were seven closed ‘hearings’ during the space of a year, with her father sentenced to an incredible 32 years’ imprisonment.  Once the different ‘sentences’ were combined, this turned into 17 years.

Atamanchuk had never concealed his opposition to the occupation of Donbas by Russian-controlled militants nor his strong pro-Ukrainian views.  Olena has learned from a former hostage, now released, that he heard Atamanchuk, who was being taken along a corridor, call out “Slava Ukraini” [‘Glory to Ukraine!”].

Atamanchuk is now at the Makiyivka Prison where the ‘DPR militants’ are holding very many civilian hostages whom they also accuse of ‘spying for Ukraine’.

While it is unlikely that any active torture methods are now being applied, the 70-year-old is held in conditions that would be difficult for a person half his age and in good health to cope with.  As a former miner, Atamanchuk already had many serious health issues, including Bekhterev’s disease, which is a form of chronic rheumatic inflammation.  According to his daughter, after torture and in the appalling conditions of militant imprisonment, this condition is progressing, and he is also suffering ever-more frequent heart palpitations and often loses consciousness.  Former hostages have told Olena that her father hardly gets up and is unable, without help, to leave the cell for the very short period in the day that prisoners get a so-called ‘walk’

Judging by the efforts to prevent Atamanchuk from speaking freely with his lawyer, the militants have a lot to hide, with this doubtless including their torture of an elderly man.

DPR militants came for Atamanchuk, his 70-year-old wife who had recently suffered a stroke and son, who had just arrived to visit his parents, during the night from 4-5 September 2019.  One of the agonizing parts of such disappearances is that nobody will tell you where your loved ones are.  Olena had to piece together what had happened from her neighbours’ account when she rang, worried, after being unable to contact them.   Most often, it is the so-called ‘DPR ministry of state security’ that carries out such armed raids, however this time, possibly because they were also seizing Atamanchuk’s wife and son, it was the ‘DPR department for fighting organized crime’ that turned up.  This may well have been because they wanted to seize the family home and other possessions, since nobody was ever charged with any kind of economic crime, and Olena did manage, after a month to get her mother and brother out of the DPR militants’ clutches.

Oleh Atamanchuk’s torment was not, however, over with the militants returning to extort money from him. The torture Oleh endured in custody had obviously had a devastating effect on him and he died, aged just 49, within a year of his release.

Olena was able, via the Red Cross, to get her mother out of occupied Donetsk.  She is now forced to hold down two jobs in order to look after her mother and small son and to send medication for her father, while trying desperately to secure his release.

It was a long time before she and her mother even knew where Atamanchuk was being held, and she has only been able to have brief telephone conversations with him since he was placed in the Makiyivka prison.  For a long time, his first question would be about the possibility of a prisoner exchange.  In February this year, Olena explained in an interview, that her father has stopped asking, so as not to hear that nothing is happening.

Vitaly Atamanchuk has gone through hell over the past three years because of his unwavering support for Ukraine.  We cannot influence militants in occupied Donbas, nor do we need to, since it is Russia that controls them and decides on any prisoner exchange.   Please help him and other hostages by making their plight known and asking politicians and NGOs in your country to help put pressure on Moscow.