Liubov Kovalyova: Sentenced to death for telling the truthShame is also a forceBrotherly friendship in practice: Head of the Ukrainian Community in Tula (Russia) brutally murderedAttempt on the life of Natalya Kovalyova
• Topics / We remember 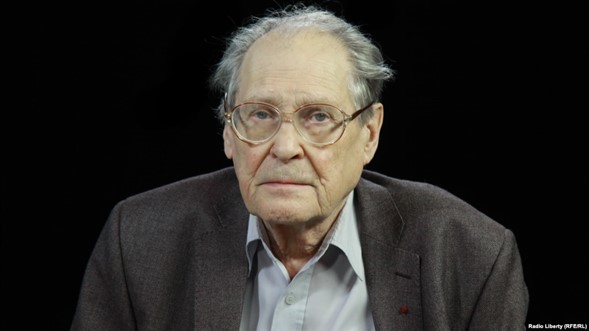 Sergei Kovalyov, one of the most prominent and eloquent Soviet and Russian human rights activists, died in his sleep in Moscow on August 9, his son Ivan wrote on social media. He was 91.

Kovalyov was one of the last surviving members of a Soviet generation that championed human rights in the late 1950s and the '60s to place it firmly on the global political agenda. His fellow travelers included physicist and disarmament activist Andrei Sakharov and his wife, Yelena Bonner, and Moscow Helsinki Group founders Lyudmila Alekseyeva, Yury Orlov, and gulag memoirist Anatoly Marchenko.

Because of his long and close relationship with Sakharov, Kovalyov was considered the iconic physicist's protégé.

Among Kovalyov's many achievements, he was the principal author of Chapter Two of the current Russian Constitution, which enumerates "the rights and freedoms of man and citizen" based on international law and the UN's Universal Declaration of Human Rights.

"One cannot sacrifice principles for the sake of pragmatic things," Kovalyov said in an interview with RFE/RL's Russian Service in 2011. "It will end up costing you more."

"I am an anti-patriot," he said in another interview, in 2005, in which he emphasized the universal qualities of justice, dignity, and human rights. "I really do not like what is called 'patriotism' and think it is a socially harmful idea."

He was a laureate of numerous international awards. In 2009, he, Alekseyeva, and Oleg Orlov (not related to Yury) accepted the European Parliament's Sakharov Prize for Freedom of Thought on behalf of the Memorial human rights organization that he helped create.

Moscow-based historian Tamara Eidelman wrote upon hearing of Kovalyov's death: "Sergei Adamovich calmly and with incredible dignity over the course of many years continued to do what he considered necessary -- defend the rights of prisoners, of any prisoners because no matter who you were before you ended up in prison, you shouldn't be tormented and destroyed inside the zone."

Anatoly Chubais, who worked with Kovalyov in the 1990s although the two men took different paths under President Vladimir Putin, wrote: "He never fought with people -- he fought for them."

Kovalyov was born on March 2, 1930, in the town of Seredina-Buda in the Soviet republic of Ukraine. In 1954, he graduated from Moscow State University with a degree in biology, beginning a promising career in science. In all, he published more than 60 scientific papers.

Like many future activists of his generation, Kovalyov's awakening came with his opposition to the 1966 show trial of writers Andrei Sinyavsky and Yuly Daniel, who received long prison terms on charges of "anti-Soviet propaganda" for publishing their satirical writings abroad. Kovalyov penned an open letter opposing the trial that was signed by three other employees of the Biophysics Institute outside of Moscow.

Starting in 1968, Kovalyov joined the nascent human rights movement, and in 1969 he was dismissed from the biology faculty of Moscow State University because of his activism.

The expulsion led him to pursue an active rights career in earnest. In May 1969, he joined the Initiative Group for the Defense of Human Rights in the U.S.S.R., the country's first human rights organization. From 1971, he was a contributor to the legendary underground journal The Chronicle Of Current Affairs, which documented in detail human rights violations in the Soviet Union.

Kovalyov was arrested in December 1974, convicted of "anti-Soviet agitation and propaganda," and sentenced to seven years in labor camps followed by three years of internal exile. On the day that Sakharov's wife was in Oslo, Norway, collecting her husband's 1975 Nobel Peace Prize, Sakharov was in Vilnius monitoring Kovalyov's trial.

Kovalyov served his prison term in the Perm region and Tatarstan and was exiled to the Far East. When his sentence was complete, he was not allowed to live in Moscow and instead settled in the city of Tver. He was permitted to move to the capital in 1987.

His activism continued during the perestroika years under Soviet leader Mikhail Gorbachev. He was a founding member of Memorial and was its co-chairman from 1990. He also participated in the Moscow branch of Amnesty International, the International Humanitarian Conference, and the Glasnost press club. In 1989, Sakharov nominated Kovalyov as co-director of the organization that soon became the Russian-American Human Rights Group.

Sakharov also urged Kovalyov to enter politics. In 1990, Kovalyov was elected a people's deputy and joined the Russian Supreme Soviet until 1993, during which time he chaired the Human Rights Committee and was an author of the 1991 Declaration of the Rights of Man and Citizen. He shepherded a law on the rehabilitation of victims of Soviet political repression through the legislature in 1991.

From 1993 until 2003, Kovalyov was a leading liberal member of the Russian State Duma. In 1994-95, he was Russia's first human rights ombudsman.

In that capacity, he traveled to Grozny, the capital of the North Caucasus region of Chechnya, with a delegation of Duma deputies and Memorial representatives during the first Chechen war. He was in Grozny when it was brutally stormed by Russian troops on December 31, 1994. He urged Russian commanders to stop the assault.

Because of his opposition to the Chechen conflict, the Duma stripped Kovalyov of his post as rights ombudsman in March 1995.

Months later, in June 1995, Kovalyov led a group of lawmakers who successfully negotiated the release of more than 1,600 hostages held in Budyonnovsk, in Stavropol Krai, by radical Chechens urging an end to the war in Chechnya.

"I can no longer work with a president who I believe is not a supporter of democracy or a guarantor of rights and civic freedoms in my country," Kovalyov wrote.

In 2003, a Kovalyov project to publicly investigate Moscow's controversial 1999 apartment bombings -- which paved the way to a second Chechen war and former KGB officer Vladimir Putin's presidency -- ran aground when two of its leading figures died, one gunned down and the other dead of a mysterious illness.

That same year, Kovalyov's legislative career fell apart when he and his liberal Yabloko allies fell short of the 5 percent threshold to get into the Duma.

As Putin amassed power, Kovalyov criticized the growing centralization of the state around the presidency. In March 2010, he was one of the most prominent signatories of an open appeal titled Putin Must Go, which has since collected more than 150,000 signatures.

In 2008, he opposed Russia's military intervention in Georgia and Moscow's recognition of the breakaway Georgian regions of Abkhazia and South Ossetia.

Kovalyov also spoke out against Moscow's 2014 annexation of the Ukrainian region of Crimea and its military, political, and economic support for separatists in eastern Ukraine.

"It must be understood that...Russia is a threat to the whole world," Kovalyov told a conference in the Ukrainian city of Lviv in November 2016. "The annexation of Crimea was clearly based on two simple goals which were impossible to hide. First, why not take what can be had by force? And second was the goal of not allowing Ukraine into Europe. Russia's Crimean caper is distinguished by its brazenness and its unexpectedness. But this is not a new strategy for Russia. It began in 1917 and continued until 2014, and still its end is not in sight."

Kovalyov also sharply criticized what he saw as a growing culture of state-sanctioned violence in the Putin era. In 2009, he wrote an open letter to then-President Dmitry Medvedev in which he warned that fascists and nationalist extremists were becoming increasingly violent against liberals and rights activists because they felt they had tacit official support.

"Our political practice is awakening disgusting tendencies in our society," Kovalyov warned. "You can't tell anymore where the intelligence agencies are and where there are simply fascists.... This is catastrophically dangerous. It is criminal not to see where it is leading."

"Another common and dangerous idea is that Russia's immorality and political barbarism are solely Russia's internal affair," he wrote in an open letter in 2015. "That isn't true. In our present interdependent world, serious problems become global and affect everyone. Russian (and not only Russian) totalitarian tendencies are fraught with catastrophic global consequences. No one knows how to deal with this challenge, but many people realize that not to face it is shameful and dangerous.

"It's true that we don't know how to make universal values enforceable instead of empty slogans, but we should at least know what simply must not be done," he added. "You cannot appease an aggressor. You must not buy your safety, especially your natural-gas supply, with other people's lives and fates."

Asked by RFE/RL once whether he felt at home politically in the opposition, Kovalyov replied simply, "[W]hat can you do? That doesn't bother me. I am used to being in the minority."

In an interview with Ekho Moskvy radio in 2008, Kovalyov said: "I am a political idealist. I believe that sooner or later lies punish themselves."

In recent years, Kovalyov had been in semi-retirement in Moscow, although he continued to comment on developments that caused him concern.

In reaction to news of his passing, the Memorial human rights group issued a statement about the man who "was a Memorial member to the very end."

"We will miss Sergei Adamovich in many ways: as a beloved, old friend; as a fearless comrade; and as an intellectual and adviser who was always and in every way true to the idea of human rights whether in war or in peace, in politics or in daily life," the group wrote.