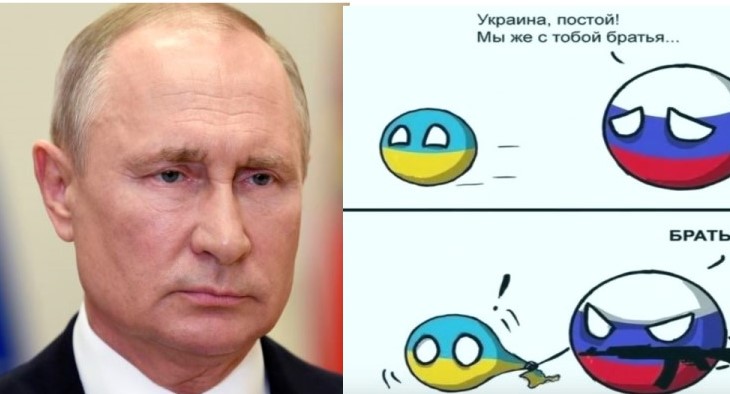 Russian President Vladimir Putin clearly did not consult with Ukrainians before writing (or commissioning) his recent article in which he denies a historical basis for Ukraine’s existence as a separate country and claims that Ukrainians and Russians are one people.  There is nothing at all to suggest that he would be interested in knowing Ukrainians’ views, but others should find the recent survey carried out by the authoritative Razumkov Centre of considerable interest.

Putin’s denial of Ukraine’s independent existence was noted far beyond Russia, as was the clear implication that the Ukrainian state essentially had no right to exist.  The Razumkov Centre carried out its survey from 29 July to 4 August, just over two weeks after the publication on the Kremlin’s site, in Russian, Ukrainian and English, of the article which he purportedly penned, entitled ‘On the historical unity of Russians and Ukrainians”.  Those polled were from a representative selection of the population and from all areas, except Russian-occupied Crimea and Donbas (in eastern Ukraine).  While the absence of two areas where a greater percentage of the population was likely to express pro-Russian views undoubtedly made a difference, it is noticeable that even the results in other parts of Donbas were not dramatically different.

Respondents were asked whether they agreed with Putin’s assertion that “there was no historical basis and could not have been” for the idea of a Ukrainian people as separate from the Russian people, and that the identifying of Ukrainians and Belarusians as separate peoples had been the result of Soviet policy.

12.5% of all respondents agreed, with 70% disagreeing (17% were undecided).  While respondents in southern and eastern oblasts were more likely to agree (19% and 22%, respectively) than in western regions (0.4%), there was still an absolute majority in all oblasts who disagreed.  One interesting distinction was in terms of whether people speak Ukrainian or Russian at home.  Although there was a clear difference, it was not as dramatic as Russia has tried to claim (7% against 21% who agreed; 81% v. 55% who disagreed).  The same, however, was not true of ethnic Russians (as compared with ethnic Ukrainians).  In their case, 30.2 said that they agreed with Putin, while 49 % disagreed (and 20.8% were undecided).

Ukrainian respondents were also asked their opinion about Putin’s claim that the territory of modern Ukraine was, to a large extent, created at the expense of the territory of historical Russia, as a result of which Russia was effectively robbed.  Here only 7% overall agreed, with 76% disagreeing.  There were geographical differences, but there was still an absolute majority against such a position, ranging from 59% in the East of Ukraine to 91% in the West.  There was even an absolute majority (56%) of ethnic Russian citizens of Ukraine who disagreed.

The essentially chauvinistic, ‘Russian world’ ideas expressed in the article were not new, nor were the numerous historical errors and attempts to muffle certain inconvenient facts.  The text does not once mention Kyivan or Kievan Rus, although this is the term accepted by all historians and others for what Britannica describes as “the first East Slavic state”.  The term ‘ancient Rus’ is instead used since this has the advantage of not mentioning the galling fact that Kyiv existed when Moscow and St Petersburg were centuries away from appearing on the geopolitical landscape. 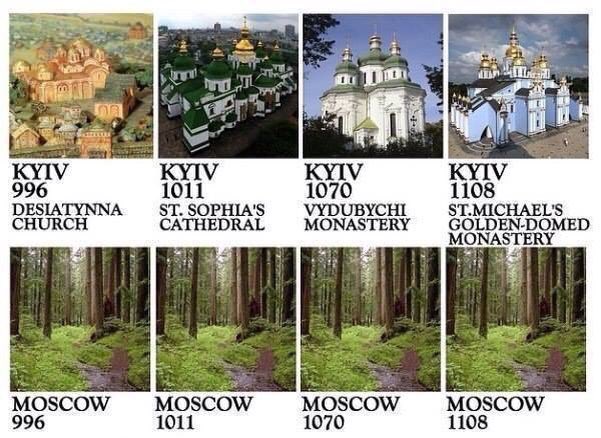 A popular Internet meme which Vladimir Putin would probably prefer people not to share ...

Ukrainian President Volodymyr Zelensky reacted to the article swiftly by noting that it had been published also in Ukrainian, indicating, he said, that we are going in the right direction.  He was dismissive of Putin’s claim that Russians and Ukrainians were ‘brotherly’ peoples, saying that Russia’s actions in recent times were far more reminiscent of the story of Cain and Abel (i.e. of fratricide).

It was a good response, but it would be hard to deny that the publication of such a denial of Ukraine’s right to exist, and separate identity, led to considerable discussion, in Ukraine and abroad, of Putin’s motives.  In an article entitled ‘Putin’s dangerous Ukraine narrative’, well-known political analyst Anders Åslund wrote that “In denying that Ukraine has any right to independence, Putin is setting the stage for war.”  This, he said, was “a masterclass in disinformation – and one step short of a declaration of war.”

The disinformation is filled with howling historical inaccuracies and manipulation, as well as obvious implications that Putin prefers to ignore (such as that his own logic means that Russia should lose part of Russian territory to Ukraine and Kaliningrad to Germany).  That, however, is for historians to write about, while western politicians would do well to heed Åslund’s warning that Putin “is setting the stage for war. The West must quickly decide what it is willing to do to prevent it.”