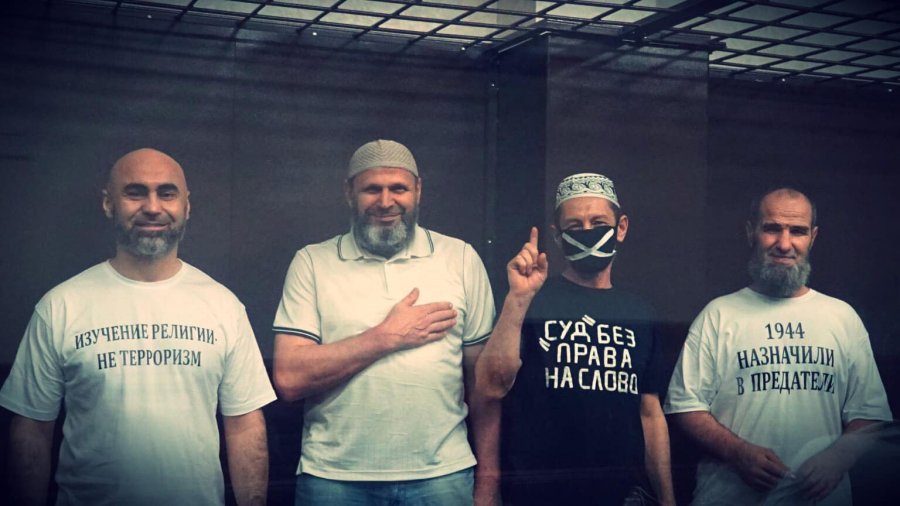 A Russian court has sentenced four recognized Crimean Tatar political prisoners to sentences from 12 to 18 years, although not one of the men was accused of any recognizable crime.  The ‘trial’ had been such a travesty that the verdict cannot be called a surprise, but that does not make it any the less shocking, especially given the strong grounds for linking the longest two sentences with Russia’s offensive against a religious community and plunder of its mosque.  The men were all wearing T-shirts, with messages reading ‘Studying religion is not terrorism’ and pointing out that, in 1944, Stalin had falsely labelled Crimean Tatars ‘traitors’ to try to justify the entire people’s deportation. Now they label them ‘terrorists’, also without any grounds.

The sentences were only slightly different from those demanded by prosecutor Yevgeny Kolpikov.  The worst – 18-year - sentences were those imposed on 57-year-old Lenur Khalilov, the head of the ‘Alushta’ religious community, and 55-year-old Ruslan Mesutov, also an active member of this community which has been the target of various forms of harassment and persecution under Russian occupation.  57-year-old Ruslan Nagayev, who is the informal Imam of a mosque in the village of Malorechenske, was sentenced to 13 years’ imprisonment.  The youngest of the men, 41-year-old Eldar Kantimirov had faced various forms of administration prosecution and harassment for his civic activism in support of political prisoners.  He refused to be intimidated and has now been sentenced by a Russian court to 12 years’ imprisonment.  All of these sentences, against men who have never committed any crime, are in harsh regime penal institutions – the first two years in such a harsh-regime prison [the very worst], and then in prison colonies. It is unlikely that the older of the men would even survive such conditions, yet in each of the cases, the court imposed a year’s ‘restriction of liberty’ after release.

Lawyer Aider Azamatov called the sentences unlawful and pointed out that they are higher than those a Russian court would impose for murder.  Here there was literally no crime.

The men were accused only of unproven involvement in Hizb ut-Tahrir , a peaceful transnational Muslim organization which is legal in Ukraine.  Russia became the first country in the world (joined in 2016 by Uzbekistan) to declare Hizb ut-Tahrir ‘terrorist in a 2003 Supreme Court ruling passed behind closed doors. with neither Hizb ut-Tahrir members, nor human rights NGOs given a chance to make submissions.  No adequate explanation has ever been provided for labelling as ‘terrorist’ an organization which is not known to have committed, or even threatened, acts of terrorism or violence in Russia or anywhere else in the world.

Lenur Khalilov and Ruslan Mesutov were charged with the more serious ‘organizer’ role under Article 205.5 § 1 of Russia’s criminal code; Eldar Kantimirov and Ruslan Nagayev with ‘involvement in such an alleged ‘group’ (Article 205.5 § 2).  All four men were also charged, under Article 278, with ‘planning to violently seize power’. The prosecution explained this truly surreal charge by claiming that the four men, as supposed members of Hizb ut-Tahrir, were planning a state coup via ‘“the total Islamization of the population”.

The four Crimean Tatars were accused of ‘terrorism’, although none was charged with any terrorist offence or plan.  The armed searches of the men’s homes on 10 June 2019 found no weapons nor anything else that would justify the charges.  In fact, during all of these armed operations, the FSB and other enforcement officers really only look for ‘prohibited literature’.  There have been numerous cases where the FSB have planted the books themselves, often in places (near a toilet or dog’s kennel, for example) where no devout Muslim would keep religious literature. This makes scepticism that a couple of ‘prohibited books’ linked with Hizb ut-Tahrir warranted.

Other than that, there were illicitly taped conversations on religious subjects where the only person whose voice could be properly heard was the person infiltrated by the FSB who appears in the case as one of two ‘anonymous witnesses’.  As always, these scarcely audible conversations were sent to certain FSB-loyal ‘experts’ who do what they are commissioned to do and claim that some word or phrase ‘proves’ a person’s involvement in Hizb ut-Tahrir.

There were two anonymous witnesses: one whose identity is unknown and the person who was clearly meeting with the men on commission from the FSB (Enver Khalilov).  In all of these ‘trials’, such anonymous witnesses are essentially the only ‘witnesses’ who testify against defendants.  Although there are no valid grounds for concealing such alleged ‘witnesses’ identity, the presiding judge invariably rejects applications for their identity to be revealed, and generally blocks questions that expose the fact that their testimony is false.  Russia has already lost one case at the European Court of Human Rights over a sentence based solely on such testimony that cannot be verified, and the recent report from the UN Secretary General was critical of Russia’s use of such methods.

It should be stressed that any such flawed ‘evidence’ is only of the men’s alleged ‘involvement’ in a peaceful organization which is legal in Ukraine.  Russia is, of course, also in breach of the Fourth Geneva Convention which expressly prohibits it from applying its legislation on occupied territory.

During one of the hearings, Kantimirov held up a placard with the words ‘Long sentences = big bonuses’.  The words are shocking but true.  These appallingly flawed prosecutions are known even in Russia to bring promotion or bonuses to the FSB who can claim good statistics on ‘fighting terrorism’.  It is likely that the situation is even more cynical in occupied Crimea since Russia is also using these cases as a weapon against Crimean Tatars who take a civic position, especially those who report on and show solidarity with victims of persecution. One of the FSB officers involved in this case, Aleksander Komaneitsev is a former Ukrainian SBU officer who betrayed his oath to Ukraine in 2014.  He has played a particularly malignant role in numerous prosecutions, including that of Crimean Tatar human rights activist Emir-Usein Kuku, and is known to use torture to force people into giving false testimony.

The ‘trial’ took place at the Southern District Military Court in Rostov (Russia) under presiding judge Roman Viktorovich Saprunov, together with  Maxim Mikhailovich Nikitin and Rizvan Abdullayevich Zubairov,  These men have already taken part in such flawed trials and, like the prosecutors Yevgeny Kolpikov and Zaurbek Savoyev, ignored or even blocked evidence demonstrating the lack of any substance to the charges.  Appeals will, of course, be lodged.

Lenur Khalilov; Ruslan Mesutov; Ruslan Nagayev and Eldar Kantimirov have all been recognized by the Memorial Human Rights Centre as political prisoners.  Their release has been demanded in numerous UN, European Parliament, PACE, etc. resolutions.

The letters show them – and Moscow – that they are not forgotten. Although nothing about this ‘trial’ and the judges’ behaviour give any grounds for optimism about the verdict on 16 August, the sentences will certainly be appealed, meaning that the men will probably remain in Rostov for some time.