Venediktova drives out key figure helping Ukraine achieve justice over crimes in Russian-occupied Crimea and Donbas Prosecutor General Venediktova is helping Russia by destroying Ukraine’s vital War Department Prosecutor General sabotages Ukraine’s legal front against Russia over war crimes in occupied Crimea and Donbas From lawyer for pro-Russia Medvedchuk party to running Maidan cases. Disturbing new top appointment in UkraineTop post in Zelensky administration given to Yanukovych era police official implicated in Maidan crimesUkraine’s new Prosecutor General moves to reverse progress on solving Maidan crimesWho is behind the campaign to discredit Maidan and turn its victims into perpetrators?Sombre Anniversary with hopes of justice for Maidan victims waningAfter destroying Mariupol, Russia offers its victims money but only if they agree to blame Ukraine Russia deports Ukrainians to occupied Donbas, forcing them to fight its war against Ukraine “I will not fear ZEvil”– digest of Russian protestsRussia sends relatives of Ukrainian soldiers and other Mariupol residents to ‘concentration camp’ in occupied DonbasHorrific conditions and torture in Russian filtration camp ‘ghetto’ for Mariupol residents Russian invaders destroy 97-year-old Ukrainian WWII veteran’s home ‘The bodies were lying in the street. Broken. Pieces. Blood...’ Russian invaders destroy Ukrainian hospitals, plundering medical equipment and abducting medical staff Even in Russia, Putin’s ‘denazification’ claims prove no excuse for war against UkraineOksana Stomina: This is medieval cruelty, multiplied by the modern possibilities and sick, maniacal ambitions‘Mariupol will still be Ukrainian’ – wife of the military22 journalists killed since Russia began its total war against Ukraine
• Topics / Implementation of European Law

Why is President Zelensky prolonging impunity for war crimes in occupied Crimea and Donbas? 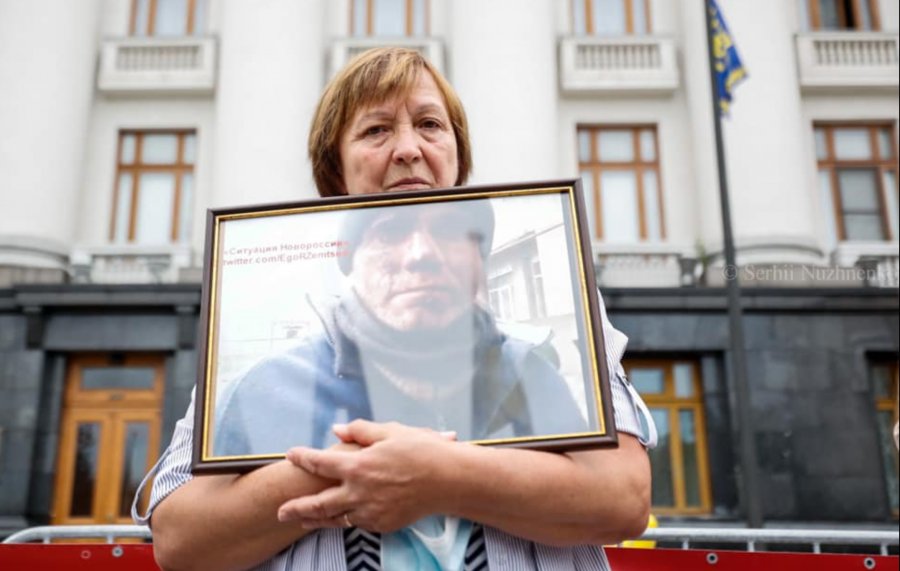 It took Ukraine’s legislators seven years to adopt a law enabling Ukraine to prosecute for war crimes committed in occupied Crimea and Donbas.  Draft bill No. 2689 was finally passed on 20 May 2021, or almost, since it is still awaiting President Volodymyr Zelensky’s signature.  The President can sign it into law or use his power of veto.  Doing neither simply extends impunity for war crimes and crimes against humanity.  Zelensky has already taken six times longer than envisaged by Ukraine’s Constitution.

Among those who gathered outside the Office of the President on 19 August, under banners reading ‘Waiting kills’, was the mother of slain defender of Donetsk Airport and Hero of Ukraine, Ihor Branovytsky.  He was murdered in cold blood after he and his men had surrendered to Russian / Russian-controlled militants in January 2015.  Others present had themselves been imprisoned and tortured in the so-called ‘Donetsk and Luhansk people’s republics’ [D/LPR] and have long called on legislators to bring Ukraine’s legislation into line with international criminal and humanitarian law.  It is simply absurd that seven and a half years after Russia’s invasion of Crimea and military aggression in Donbas, Ukraine’s laws should make it so difficult to prosecute for war crimes.

The bill, which has now been awaiting the President’s signature for six times longer than the legal period, was a critical step forward, one of particular importance given that war crimes and crimes against humanity do not have any statutes of limitation (are not time-barred).  Even if those committing them are now outside the Ukrainian authorities’ control, they will remain answerable, and can be sought through international channels. Oleksandra Matviychuk, Head of the Centre for Civil Liberties which organized the protest on 19 August, is convinced that the law, and the liability it will finally impose, will have a deterrent effect.

It is possible that the President will himself understand as Matviychuk points out, how bad it will look if he hasn’t signed the bill before Ukraine’s important Crimea Platform summit on 23 August.  How can you call on other countries to react to the appalling human rights abuses in occupied Crimea if Ukraine itself is not ensuring that it has the mechanisms of accountability?

Zelensky’s procrastination only exacerbates suspicion regarding the recent removal of Gyunguz Mamedov from his vital role as Head of Ukraine’s ‘War Department’.  The decision, ostensibly taken by Prosecutor General Iryna Venediktova on 30 June, is baffling and seems designed at sabotaging war crimes investigations and prosecutions, including Ukraine’s part in the international investigation over the downing by a Russian Buk missile of Malaysian airliner MH17 on 17 July 2014.

As reported, the Prosecutor of the International Criminal Court [ICC], Fatou Bensouda stated in December 2020 that she had found reasonable grounds for believing that war crimes and crimes against humanity, falling within ICC jurisdiction, “have been committed in the context of the situation in Ukraine”.  Such crimes, in connection with the conflict in Donbas and with Russia’s ongoing occupation of Crimea are sufficiently grave, she writes, to warrant investigation by the ICC.  It was clear from her statement that human rights groups, working closely with Mamedov’s War Department, had played a vital role in providing detailed information about war crimes, crimes against humanity and multiple violations of international law in occupied Crimea and Donbas.  The decision was very welcome but had taken a very long time to come, and there are no grounds for anticipating a swift conclusion to any ICC proceedings finally initiated as a result.

Ukraine must act, and it is now Zelensky who is holding matters up.  The draft Law in question is ‘on amendments to some Ukrainian legislation regarding implementation of international criminal and humanitarian law’.  It is needed as Ukraine’s Criminal Code has long lacked the legal instruments required for qualifying the war crimes and crimes against humanity which Russia’s military aggression since 2014 has made all too relevant.  This has led to a situation where virtually nobody has been tried for war crimes and where the charges initiated often fail to encompass the full enormity of the crimes committed.

International criminal law identifies four types of international crimes: genocide; crimes against humanity; war crimes and the crime of aggression. The present Criminal Code does cover the crime of genocide but has nothing about crimes against humanity.  Article 438 (violation of the laws and customs of war) has very vague formulations regarding war crimes, while the article on the crime of aggression is not in keeping with the contemporary definition of this crime.  Once the law is in force, it will enable Ukrainian courts to examine such international crimes on the basis of the same principles as those adhered to by the International Criminal Court at the Hague.  The amendments will broaden the number of war crimes that Ukrainian legislation can prosecute for without having to search for guidance in international documents.  At present, the killing of a soldier after he was taken prisoner (Ihor Branovytsky and others) can only be treated as murder, although this is very clearly a grave war crime.

Another reason why the law is so very important lies in the provisions on amnesty in the Minsk Agreement(s).  If the first at least made it clear that capital offences cannot fall under an amnesty, Minsk II’ agreed at a summit between the Presidents of Ukraine; Russia; France and Germany on 12 February 2015, states the following: “5. Ensure pardon and amnesty by enacting the law prohibiting the prosecution and punishment of persons in connection with the events that took place in certain areas of the Donetsk and Luhansk regions of Ukraine”.

War crimes or crimes against humanity cannot have any time bar and are not subject to any amnesty.