Documenting war crimes in Ukraine.
The Tribunal for Putin (T4P) global initiative was set up in response to the all-out war launched by Russia against Ukraine in February 2022.
• Topics / Point of view

The main threat is in ourselves 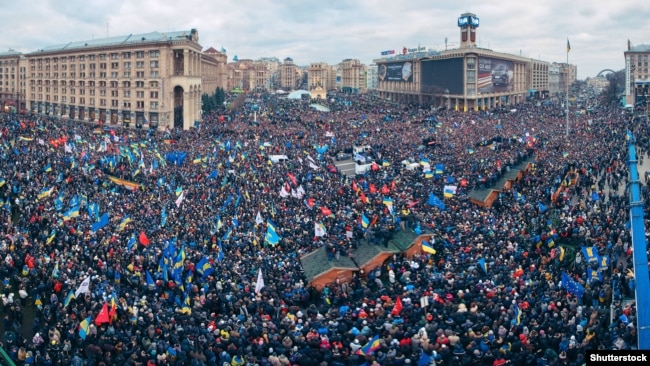 August 24, 1991 is felt as a holiday (although, I would note in parentheses, it would be more natural to consider December 1 an Independence Day holiday). What many generations of Ukrainians dreamed of happened, and hundreds of thousands of them died in the twentieth century during the military confrontation and in the Gulag for the realization of this dream. Ukraine's withdrawal from the USSR meant the collapse of the evil empire and the beginning of a new history of Ukraine.

However, the feeling of a holiday is accompanied by a strong feeling of bitterness and worrying for the future, when one sees how Ukraine in 30 years became the poorest country in Europe, with the highest mortality level, what abyss separates rich from the poor, how the level of migration and the number of working migrants rises, how the society in general becomes more and more cruel and how the people do not trust each other. The majority of Ukrainians remained poor and uneducated provincials with rigid thinking. And still, the main problem of the country is the catastrophic lack of people with modern thinking, able to create something new.

Could it be different? The Ukrainian people, exhausted by vast losses in two world wars, in the fight with totalitarian regimes of Germany and USSR and as the result of artificial hunger of 1921-1923, 1932-1933, 1946-1947 (no other people in twentieth century suffered such multi-million losses!) and weakened by the mass political repressions, unable to rely on the church (Ukrainian autocephalous Orthodox and Greek Catholic churches were ruined and banned) could not create mass anti-communist movement (like Poland did) and prepare the new elite internally different from the old one, which would be able to replace the Soviet military nomenclature (like in Poland, Czech Republic and Hungary). As Volodymyr Bukovsky rightly said, communism in the USSR was not defeated, it fell under its own weight.

Let us recall: the communist majority in the Verkhovna Rada compromised and declared independence in order to retain Soviet power. Ukraine was doomed to independence due to the collapse of the Soviet Union, but was not ready for it. Independence came as if prematurely. History just comes true – beyond our understanding of the laws of development that should be followed. And so we unexpectedly received (who expected that this might happen during our life? – rare individuals!) a new historical situation: a country without a political nation, where the minds of people living in the West and East are possessed by various false myths, where most people were disoriented and did not really understand what actually happened.

In 30 years, we have become much closer to real independence. Three generations came into being, which were formed after 1991. These boys and girls are much more open-minded. They are mostly Ukrainian patriots, for them the USSR is a long history. A strong civil society has grown, which twice rebelled en masse against the injustice and arbitrariness of the state in 2004 and in 2013-2014 and won. In 2014, there was a wonderful phenomenon of volunteering, when 80% of Ukrainians supported the army, then incapable of defence, the wounded, the sick, the displaced, and 20% do it constantly. The creative potential of Ukrainian society is huge.

However, nowadays there are even more threats to our independence than in 1991. The leadership of the Russian Federation, supported by the imperial ambitions of the majority of Russians, does not want to accept Ukraine's departure, our Euro-Atlantic aspirations, and constantly does not allow us to live and develop peacefully, threatening the escalation of the armed conflict. Only really free and democratic Ukraine can defeat authoritarian and paternalistic Russia in this duel. However, our leaders constantly produce old Soviet rudimentary practices, dragging us back to the “Russian peace”. Law enforcement agencies are still working according to Soviet standards. Corruption, in fact, is a substitute for the market and is due primarily to the fact that business and government are closely linked, and profits can be provided only through proximity to government. Anti-corruption methods are exclusively repressive, ie destructive. But the difficult problems cannot be solved in easy ways. And the populism of the government and attempts to rely on what the "people" want will lead the country to a dead end. After all, the "people" want to imprison as many officials as possible, shoot embezzlers, take money from the rich and give it to the poor, expel all "Persons from Caucasus" and migrants. Ukrainian political elites have always betrayed their people, and this threat is still relevant today.

Thus, the main threat is in ourselves. We were not able to create a civilized modern state that would become a subject rather than an object of the world’s politics. An old phrase by Danylo Skoropadsky that "Ukrainian democracy is semi-educated, unbridled, undisciplined and unconventional" is said as if about the present. Whatever political party Ukrainians create – it turns into CPSU, whatever new law enforcement agency they build, it turns into KGB. We allow the state bodies to be irresponsible and uncontrolled. We must finally understand that without necessary changes in the policy, economics and social life the internal contradictions will pile up and tear the country apart, as it happened with USSR. Either Ukraine will gradually become a truly free and democratic country, or it will lose its independence.

The key is to unite for the sake of freedom, which is the national idea of Ukrainians. The "virus of disobedience", the desire to freely regulate one’s own destiny, is one of our defining features. This "virus" raised the uprising in the Stalinist Gulag (Ukrainians were the soul, organizers and leaders of the Norilsk, Kengir and other uprisings), inspired the “Shistdesyatnyky”, who went to the camps for the right to call a spade a spade. It finally brought people to the Maidans in the fall of 2004 and 2013 and raised volunteers to defend against Russian aggression in 2014..

The adoption of the new Constitution with the fundamental value of the freedom of people should be the basis for all transformations. Functioning of a full-fledged land market and contribution to the development of IT and other technologies, in particular, the creation of something similar to Ukrainian Silicon Valley, should cause accelerated economic development. It is necessary to stop illegal actions of SBU, NABU, the National Security and Defence Council which only ruin business. We need a real, not imaginary, reform of the court and law enforcement agencies ... But all this is only possible if we overcome the old Soviet practices.

No matter what we talk about – police or prosecutorial reform, torture in the SBU or the fight against corruption, repayment of debts to employees of state-owned enterprises or treatment of migrants and residents of the occupied territories – we always answer the question: does the state respect human freedom, is it directed at cessation or at least mitigation of human suffering, or, conversely, it is indifferent to them? This question, like a litmus test, separates the trend towards respect for European values from the conservative trend towards preserving Soviet rudiments.

It seems, God protects Ukraine. In the extreme moments of these 30 years, something happened that saved us. But God helps only those who help themselves. Isn't it time to help yourself better?