Russia prosecutes head of a Ukrainian Orthodox Monastery in occupied Crimea for "unlawful missionary activities"Ukrainian Orthodox Church in occupied Crimea under imminent threat following Russian Supreme Court decisionRussia orders demolition of Ukrainian Orthodox chapel in occupied Crimea and threatens to prosecute Archbishop KlymentUkraine takes vital step to protect Ukrainian Orthodox Church in CrimeaRussia to answer to European Court of Human Rights over detention of Crimean Archbishop KlymentUkraine is abandoning its Church and believers in Russian-occupied CrimeaCathedral plundered as Russia pushes to crush the Ukrainian Orthodox Church in CrimeaCrimean Tatar’s impassioned final address after Russia seized his homeland yet accused him of terrorismHow can Ukraine’s leaders hand Babyn Yar into private Russian hands? Russia is destroying ancient Chersonese to distort history and legitimize its occupation of Crimea Record sentence in mounting persecution of Jehovah’s Witnesses in Russia and occupied Crimea PACE finalizes capitulation to Russia, while listing all reasons why this is appeasement Moscow’s proxy ‘republics’ announce that Donbas is and always was ‘Russian’Ukraine’s religious freedom crushed in Russian proxy Donbas ‘republics’Convicted of worship as Russia steps up persecution of religious ‘dissidents’ in occupied CrimeaEmpty promises from Ukraine’s leaders as release of Kremlin’s hostages ‘buried’Russian occupiers of Crimea want the UN to force Ukraine to give them waterReturn to Yanukovych’s selective justice condemned as thousands protest plan to arrest PoroshenkoJehovah’s Witness in Russian-occupied Crimea gets 6 years for ‘undermining state security’ by praying at homeRussian Deputy Defence Minister: ’Why should we be ashamed of Stalin?’
• Topics / Freedom of conscience and religion 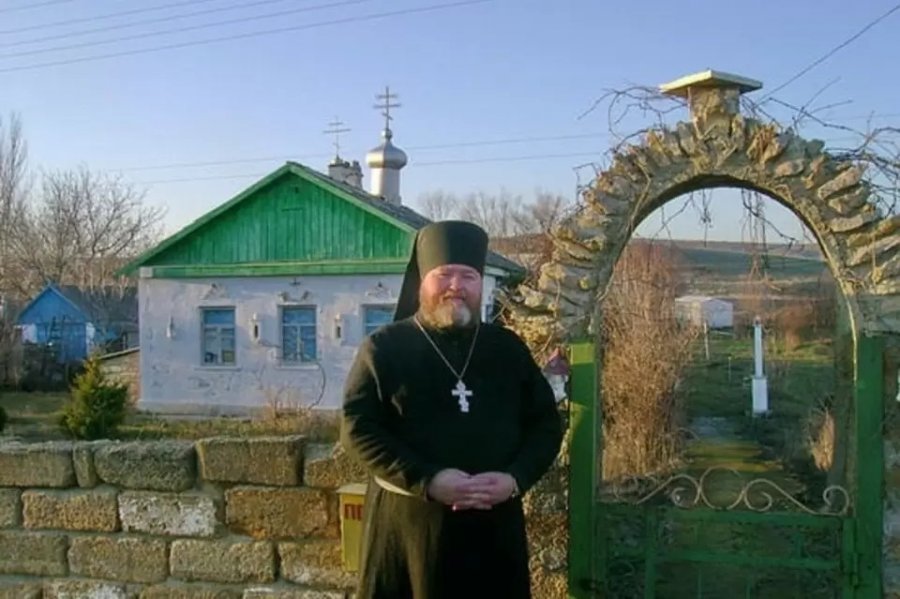 A Russian-controlled ‘court’ in occupied Crimea has fined the Head of the St. Demetrius of Thessaloniki Men’s Monastery for holding a church service on the private land on which the monastery stands.  Russia, which is internationally condemned for its illegal occupation of Ukrainian Crimea, claimed that such worship constituted ‘unlawful missionary activities’.

The ‘ruling’ on 23 August was passed by a ‘magistrate’ from the ‘Bilohirsk District Court’, with Archimandrite Damian fined 15 thousand roubles (around 200 euro) under Article 5.24 § 4 of Russia’s code of administrative offences.  The ‘court’ heard only the witnesses for the prosecution and did not give witnesses for the defence an opportunity to speak before passing a ruling which Archimandrite Damian is surely right in thinking had been prepared in advance.  He points out that the prosecution witnesses, namely individuals from Russia’s so-called ‘centre for countering extremism’ who burst into the church on 8 August, “were not able to name a single fact of ‘unlawful missionary activities’ on my part.  I didn’t say a word to these ‘wolves’ who arrived in the church as we had already begun the liturgy.”

It seems that there were, in fact, two visitations by individuals from Russia’s so-called ‘Centre for countering extremism’, however on the first occasion, they just stood and watched.  Then, on 8 August, Major Volodymyr Viktorovych Gorievanov and his men burst into the church during the Sunday morning service and prevented Archimandrite Damian from continuing.  The worshippers were forced to leave, and Gorievanov began drawing up the protocol about supposed illegal missionary activities.  Archbishop Klyment, Head of the Church in Crimea, called this “an appalling act of lawlessness.  A priest is accused merely of praying to God in his own home. After all the territory of the monastery is private, with the building divided into two parts – the area where he lives, and that where he worships. Essentially a priest is to be tried for praying at home”.

The occupation regime has already used the extraordinary claim about ‘unlawful missionary activities’ against Imams, prosecuting them too for holding prayers in their own mosque.

The situation here is slightly different. If the Russian occupiers (and the Muftiat which is collaborating with them) target specific mosques or religious communities that are viewed as ‘too independent’, the attack on the St. Demetrius of Thessaloniki Men’s Monastery is part of a concentrated offensive against the Ukrainian Orthodox Church in Crimea which began essentially with Russia’s invasion and annexation of the peninsula.  One of many weapons used was the demand for ‘re-registration’ under Russian legislation.  Moscow doubtless hoped to hide its persecution of particular faiths by citing refusal to comply with the re-registration rule.  That failed when, in early 2019, Archbishop Klyment announced that they were seeking such registration for the Crimean congregation (rather than for the Crimean Diocese of the Ukrainian Orthodox Church).  The application was, predictably enough, rejected.

After issuing the ready-made ‘ruling’ on 23 August, the ‘judge’  hid behind the security guards and vanished without providing an answer to Archimandrite Damian’s most urgent question. He needs to know, he explained, whether he can still, after this ‘ruling’, carry out his priestly duties within the Crimean Diocese of the Orthodox Church of Ukraine, or whether he must now leave Crimea if he wishes to remain a serving priest.

The worrying answer to his question was provided by Serhiy Zayets, the lawyer representing the Crimean Diocese.  He stressed that the ruling would be appealed, however, if it is upheld, then yes, “this will mean an indirect ban on services in the church of the Ukrainian Orthodox Church in the village of Balki, Bilohirsk District. Or more exactly, [it will mean] that every attempt at such a service could cost 50 thousand roubles”  (the much steeper fine being for ‘repeated offences’).

In an earlier interview after the raid, Archbishop Klyment was fairly bitter about the Ukrainian government’s abject failure to protect the Church in Crimea.  It was only after he went on hunger strike in Kyiv that the Cabinet of Ministers finally passed a resolution aimed at defending the Ukrainian Orthodox Church in Ukraine.  That was tabled in Ukraine’s Verkhovna Rada [parliament], but has to this day not been placed on the agenda. This is shocking negligence.  The Church in Ukraine is under attack to a large extent because of its importance as an element – and for many in occupied Crimea an oasis -  of Ukrainian identity. For that reason alone, the government should be doing everything in its power to protect the Church.  A sanctions list against those persecuting the Church was drawn up some time ago, but has also not been passed.

Just over a year ago, on 23 July 2020, Klyment was threatened with criminal prosecution if he did not demolish a Ukrainian Orthodox chapel in Yevpatoria.  Then, on 4 August, Russia’s Supreme Court refused to reconsider the decision to evict the Ukrainian Orthodox Diocese and congregation from the Cathedral of St Vladimir and Olga in Simferopol which Russia has been trying to take over since its invasion n 2014. Whether because of cases before international courts, including the European Court of Human Rights, or because Moscow fears that the Moscow Patriarchate has a lot to lose in mainland Ukraine, Russia has not implemented that decision.  The aggression against the monastery demonstrates that this could happen at any time.  In reporting the Supreme Court decision, Zayets wrote that it was time to sound the alarm, with the decision essentially meaning “the total dissolution of the Ukrainian Orthodox community in Crimea.  This is not formally genocide, but it borders on it. Russia is destroying yet another Ukrainian religious and cultural group and is continuing to purge Crimea of all that is Ukrainian”.