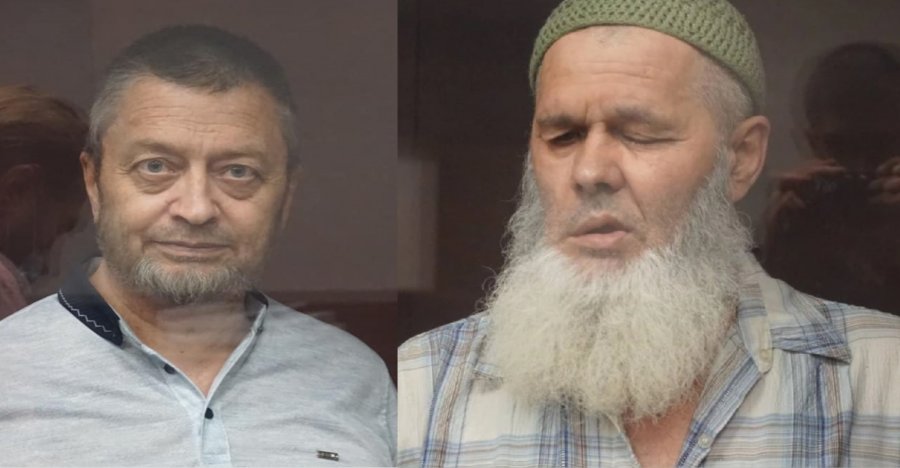 One of the five cloned ‘trials’ with which Russia is trying to deflect attention from its  attack on Crimean Tatar civic journalists and activists is likely to result in the death of two of the five recognized political prisoners.  There is virtually no movement in the ‘trial’ of 61-year-old Servet Gaziev, Dzhemil Gafarov (59) and three other men due to the number of hearings that have needed to be adjourned because one or both of the men were too unwell to take part.

On 26 August, presiding judge Valery Opanasenko announced that Gaziev could not take part in the hearing due to ‘facial nerve paralysis’ on the right-hand side. This, Opanasenko said, was a diagnosis given that day by a Rostov Regional Penitentiary Service hospital doctor.  The lawyers stated that it would infringe Gaziev’s rights if the hearing continued without him, a position that was supported, not only by the other four defendants, but by the state prosecutor.  The hearing was, therefore, adjourned until 2 September.

The diagnosis was, at best, incomplete, since what was referred to as ‘facial nerve paralysis’ is very clearly the result of a mini stroke which Gaziev suffered at the end of June.  As reported, on 9 July, veteran Russian human rights defender Lev Ponomaryov filed a formal demand for information about Gaziev’s state of health with both the Rostov Regional Penitentiary Service and the Prosecutor’s Office.  Crimean Solidarity has learned that Ponomaryov was told that information would not be provided about Gaziev’s health as this was confidential medical information.  It was, however, claimed that Gaziev’s state of health was “satisfactory” and that he did not require urgent medical care and hospitalization.

One might agree that a person’s medical records are confidential were it not for ample evidence, both in this case, and in those of other Ukrainian political prisoners, that the Penitentiary Service is concealing the real situation.  It has been clear since the beginning of this ‘trial’, that the SIZO [remand prison] staff are simply pump Gaziev up with painkillers before each hearing in the hope that, in this way, his ‘presence’ can be ticked off. Gaziev’s sister, Svitlana Ablyamitova, has been sounding the alarm for months now.  As a doctor, she is aware how dangerous it is to overuse painkillers in this fashion, especially since Gaziev is experiencing acute stomach pain, and believes that they can only be still further harming her brother’s health.  One of the many ambulance doctors who has needed to be called concluded that Gaziev was suffering from chronic cholecystitis - an inflammation of the gallbladder, causing abdominal pain, vomiting and possibly fever. That, of course, was a diagnosis based on a brief examination and initial assessment of the symptoms, whereas Gaziev should have been hospitalized and had a lot of tests done.

The problem is that doctors linked with the Russian Penitentiary Service know that a diagnosis regarding hospitalization or release from detention is not what the FSB and prosecutor want to hear.  There have been a number of cases involving Crimean Tatar and other Ukrainian political prisoners where even the European Court of Human Rights has received false claims that a person’s condition is ‘satisfactory’ when, in fact, just the existing medical condition alone meant that the person’s life was in danger in the conditions of a Russian prison.

This ‘trial’ is a record-breaker as there are two men whose lives are in jeopardy  If Gaziev’s condition has gravely deteriorated while imprisoned, Gafarov’s medical issues were so serious that, even by Russian law, he should never have been remanded in custody. Gafarov suffered a serious heart attack in 2017 and was diagnosed that same year with fourth stage chronic kidney disease, which is only a step away from the fifth stage, namely kidney failure.  His kidneys are not functioning properly, with this effectively meaning that he is in a permanent state of blood poisoning.  The kidney failure, exacerbated by the appalling conditions of the SIZO, the lack of proper nutrition and constant problems even with the SIZO passing on medication provided by his family, has led to the development of extremely painful gout since the kidneys are unable to get rid of uric acid which instead builds up in his body.  He is also at heightened risk of another heart attack.  It was probably because of the latter that he was hospitalized after a court hearing on 10 June needed to be adjourned because of his condition and that of Gaziev’s.  Gaziev, however, was returned to the SIZO almost immediately and Gafarov after a brief period in hospital.

Gafarov’s lawyer, Rifat Yakhin has repeatedly complained that the medical staff at the SIZO are avoiding providing either him or Gafarov himself with medical information. There was a sharp deterioration in Gafarov’s health in December 2020, shortly after the same doctor who had concealed information also refused to hospitalize Gafarov and order a proper examination.

It should be stressed that the Russian prosecutor, judges and doctors who are risking the two men’s lives are well aware that there are no grounds for them being in detention in the first place.  The men are not accused of any recognizable crime, and the organization which Russia is claiming they were involved in is legal in Ukraine.  Hizb ut-Tahrir  is a peaceful transnational Muslim organization which is not known to be involved in terrorism anywhere in the world, and the Supreme Court ruling in 2003 that declared it ‘terrorist’ has never been properly explained. There is no evidence that the men were actually involved in Hizb ut-Tahrir, but this is no problem for Russia’s ‘justice system’ which uses FSB-loyal ‘experts’ to find ‘proof’ of involvement in an innocuous word  or in conversations (from 2016!) about repression in Russia, about courage, etc, as well as ‘anonymous witnesses’ whose ‘testimony’ cannot in any way be verified.  The hearing on 26 August was due to question one of these secret individuals  with that now scheduled for 2 September.

Since 2016, the FSB have been using ‘Hizb ut-Tahrir’ charges in occupied Crimea as a weapon of repression, especially against civic journalists and activists from the Crimean Solidarity civic initiative.  Servet Gaziev, Dzhemal Gafarov were among the 23 men whose arrests on 27 November 2019 (as well as those soon afterwards of Rayim Aivazov and Eskender Suleimanov) received international condemnation as an attack aimed at crushing voices who spoke out  against Russian repression.  Human Rights Watch stated that “the sweeping arrests in Crimea aim to portray politically active Crimean Tatars as terrorists as a way to silence them”.  All of the men were recognized almost immediately as political prisoners by the Memorial Human Rights Centre, and their release has been demanded by, among others, the European Parliament and US State Department.

Russia has divided the men’s ‘case’ into five identical clones which were intended to run in parallel.  Servet Gaziev and Dzhemil Gafarov are on ‘trial’ together  with civic activists Alim Karimov; Seiran Murtaza and Erfan Osmanov.

Please write to the men!

The more letters they receive, the more Moscow will understand that its torment of men like Servet Gaziev and Dzhemil Gafarov is under scrutiny.

Letters need to be in Russian, and on ‘safe’ subjects.  If that is a problem, use the sample letter below (copying it by hand), perhaps adding a picture or photo. Do add a return address so that the men can answer.  The particular addressee’s name and year of birth need to be given.