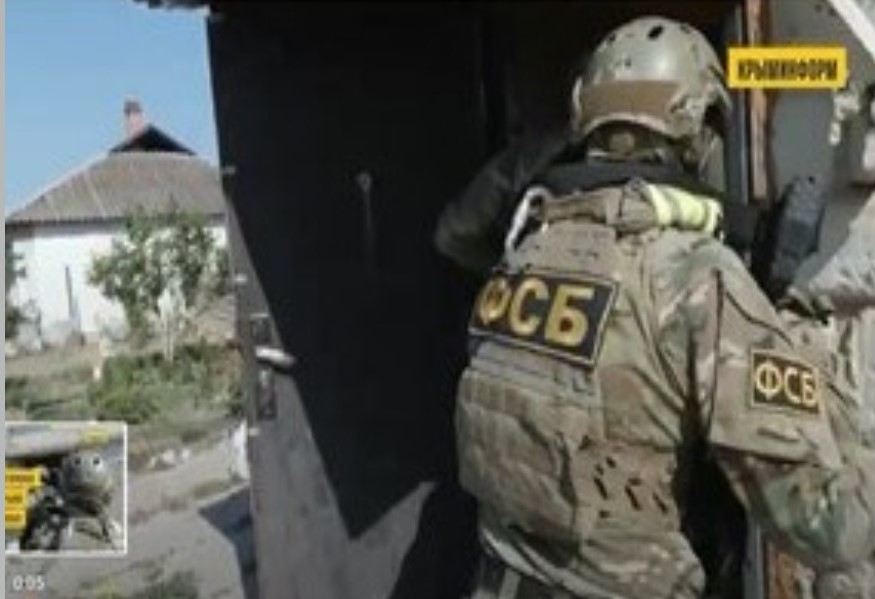 Arrests on 10 June 2020 Screenshot from the FSB video

Four men have gone on trial in Russia on charges linked with a terrorist attack that never happened in occupied Crimea. Virtually nothing is known about the men and the charges, however certain details, especially the alleged link with “radical Ukrainian formations” fighting in Donbas, arouse scepticism.  The only terrorist attack in Crimea since Russia’s invasion and annexation of Crimea was a mass shooting in Kerch which Russia stopped calling ‘terrorist’ as soon as it became clear that no link with Ukraine could be established. There have, however, been a huge number of ‘trials’ for terrorism, most without any recognizable crime, and the others where it is claimed, without any convincing evidence, that there were plans which Russia’s FSB thwarted.

On 10 June 2020, Russian and Russian-controlled media posted information from Russia’s FSB which claimed that the latter had averted a terrorist attack on a Simferopol market.   It was reported that five men had been detained, with all described as citizens of the Russian Federation.  Since Russia has made it next to impossible to live in occupied Crimea without taking Russian citizenship, the latter does not mean that the men are not Ukrainians.  The FSB claim that the detained men had been planning to detonate a home-made explosive device at a market and also “engaged in propaganda in the Internet of the ideology of terrorism and extremism”.  The report asserted that the FSB had removed explosive devices; ammunition; cold weapons; means of communication on which the FSB allegedly found information about the planned crimes, as well as” links with representatives of radical Ukrainian formations fighting in the south-east of Ukraine”.   A video showed enforcement officers bursting into two homes, with separate shots of various items from explosive devices, etc. which may, or may not, have been found in the two homes.

On 12 June 2020, the Russian-controlled Kievsky District Court in Simferopol remanded three men in custody: Andriy Kuliyevych; Mykola Lahutin and Valentin Khoroshayev.  A fourth man – Danylo Reshetnychenko – was placed under house arrest.   It is not clear whether the original statement talking of five men was wrong, or whether charges were not laid against one person.

The trial now beginning at the notorious Southern District Military Court in Rostov (Russia) is in connection with the above-mentioned four men.  Kuliyevych; Lahutin; and Khoroshayev are charged with ‘illegal possession, purchase or transfer of explosive devices (Article 222.1 § 2 of Russia’s criminal code); ‘Public calls to carry out terrorist activities’ (Article 205.2 § 1) and ‘plans to carry out an act of terrorism’ (Article 30 § 1, Article 205.2.  Reshetnychenko is accused only of ‘public calls to carry out terrorist activities’

In reporting that the trial is beginning, the Crimean Human Rights Group notes that “the occupation authorities often use charges of terrorism as a pretext for politically motivated persecution or propaganda among the local population justifying the intensification of ‘anti-terrorist measures.  This case could be one such example”.

Russia began using ‘terrorism’ or ‘sabotage’ plots within two months of its annexation of Crimea.  The aim was clearly to intimidate Ukrainians and/or force them out of Crimea and to push Moscow’s narrative about ‘a Ukrainian threat’ from which the FSB was purportedly ‘protecting’ Crimeans.  The first ‘show trial’ – of Ukrainian filmmaker Oleg Sentsov and three other Ukrainians – evidently targeted opponents of annexation.  In the first two years, most of the politically motivated trials were also of Crimean Tatars or other Ukrainians who were viewed as hostile to the Russian occupiers.

That changed dramatically with two waves of arrests in August and November 2016, where the Russian FSB tried to convince Crimeans and the international community that they were defending Crimea against Ukrainian plans to carry out acts of sabotage on the peninsula.

The first of these went badly wrong, essentially because the FSB tried very hard, yet failed, to prevent Yevhen Panov from seeing an independent lawyer and recounting the torture he had been subjected to.  One of the men, Andriy Zakhtei, remains imprisoned to this day.

See: When Russia shouted that Ukraine had attacked Crimea: A tale of torture and fabrication

The FSB had learned their lesson, and with the arrests in November 2016 went for three men who knew each other well:  academics Dmytro Shtyblikov and Oleksiy Bessarabov, and retired naval captain Volodymyr Dudka.   Around ten days later, they arrested two younger men – Oleksiy Stohniy and Hlib Shabliy -  who shared the same former Ukrainian military background.  Attempts to link the latter two men did not prove convincing, despite the torture used to extract ‘confessions’.  Both were convicted of charges that seemed very different to the videoed statements.

See: 14 year sentences for Russia to present Ukraine as the enemy in occupied Crimea

Prykhodko (b. 1958) had never concealed his vehement opposition to Russia’s occupation of his Ukrainian homeland, and had suffered harassment from the occupation regime since 2014.  His arrest on 9 October 2019 was on overtly absurd charges, with the FSB making no real attempt to make the ‘evidence’ in any way convincing.  Now 63, Prykhodko, like most of the Ukrainians sentenced on such charges, has been recognized as a political prisoner by the renowned Memorial Human Rights Centre which stated that the persecution was clearly for his pro-Ukrainian views.

These are by no means the only victims of politically motivated ‘terrorism’ cases.  The  list is long, and makes it imperative that attention is given to the trial now beginning of Valentin Khoroshayev ;Andriy Kuliyevych; Mykola Lahutin and Danylo Reshetnychenko.