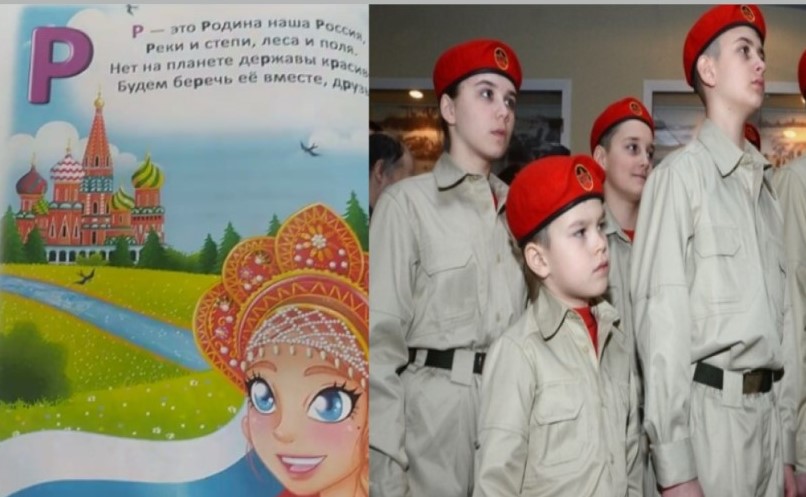 From the Alphabet of Donbas, in which ’R’ stands for ’Motherland Our Russia’, children giving the ’aoth’ to serve their Fatherland, etc. in Molodaya Gvadiya - Yunarmia

Children beginning school for the first time in the Russian proxy ‘Donetsk people’s republic’ [‘DPR’] are to receive an ‘Alphabet of Donbas’ where ‘R’ represents ‘the Motherland’ [‘rodina’] which is presented as being Russia and where the children learn that there is only one language that they should want – Russian.  This, moreover, is one of the more innocent examples of how Russia is financing efforts to indoctrinate Ukrainian children into seeing Donbas as ‘Russian’ and Ukraine as the enemy.  These include a ‘DPR’ version of Russia’s Yunarmia [‘Youth Army’] where children learn to use weapons and are taught that they should want to use them to defend their ‘Russian Donbas’ home against ‘the enemy’.  Children are also taken to occupied Crimea or Russia to take part in ‘military patriotic games’, forums or training in a military cadet corps.

The propaganda is not necessarily guaranteed to succeed.  ‘News of Donbas’ spoke with a young man, Serhiy, who has left occupied Donbas in order to study at a Ukrainian university.  He is currently studying at preparatory courses in Mariupol with these making up, among other things, for the lack of Ukrainian language and history in ‘DPR’ schools.

Serhiy was 12 when the militants seized control of his native Donetsk, and recounts that in school they were taught Russian history.  At the very beginning, he says, there was a little about Ukrainian history, but then even that was removed. They also studied so-called ‘DPR’ history  – “about what happened in DPR, how it was formed, where it came from”.  On ‘DPR special occasions’, schools would get visits from fighters or from ‘DPR officials’ who would assure them that “DPR is the future”.  Serhiy adds that young people in Donetsk were also told that Russia would soon “come for them” and ‘DPR’ would join the Russian Federation “and everything will be good”.  “We were even forced, in order to get a degree, to organize a Russian passport”.

In order to maintain links with Russia, there are also regular joint youth forums, with young people taken, for example, to occupied Crimea or to Russia.   In early August 2021, 65 young people from ‘DPR’ were taken on a ‘cultural-educational’ trip to Russia.  The event was very much in Soviet propaganda mode with 700 young people from 14-19 reportedly attending from 48 countries. What is, however, different from Soviet times is that Russia is using such propaganda events to push its narrative on the occupied parts of Ukraine and to give illegal entities the appearance of legitimacy.

Children and young people in both occupied Donbas and Crimea are also being drawn into Russia’s mounting militarization of childhood, with various ‘military patriotic’ activities, competitions, camps, etc. organized, both within the occupied territory, and jointly with Russian young people.

The ‘‘Program of patriotic education for children and young people of the DPR’, adopted back in 2017, states openly that “patriotic education should become the main objective of republic’s state ideology as a part of Russian world ideology”.  Systematic ‘work ‘ is proposed on forming “high patriotic consciousness, devotion to their Motherland, readiness to carry out their civic duty and constitutional obligations in defending the interests of DPR”.

At least some of the propaganda activities are organized by ‘the Russian Centre’ which, its site says, was “founded in order to intensify the processes of integration of Donbas with the Russian Federation in humanitarian, social and cultural aspects” and create strong mutual relations between the so-called ‘republic’ and Russia.

By far the most alarming aspect of Russia’s militarization is the so-called ‘Molodaya Gvardiya – Yunarmia’ [‘Young Guard – Youth Army’], the ‘DPR’ equivalent of Russia’s ‘Yunarmia’.  According to the ‘DPR information agency’, this entity was formally created on 5 April 2019.  That this was no innocent centre for ‘military patriotic sports’ was spelled out by Edward Basurin, the deputy head of the so-called ‘people’s militia’ (the militant fighters).  He asserted that “it is important to not only bring youth up even more patriotically, but to fight against the falsification of history which the mendacious Kyiv authorities are currently involved in”. This ‘Youth Army’, he claimed, would “include both physical and intellectual development, and also form correct life views in the broad sense of the word”.  ‘News of Donbas’ reports that there are now 2.5 thousand members of this ‘Youth Army’ whose Russian equivalent has constantly aroused associations with the Hitlerjugend.

The only cheering thing is that the militants’ propaganda does not necessarily work.  Serhiy, for example, says that he found it revolting to listen to all the propaganda, because he knows that Donetsk is Ukraine.  He was finally forced to learn the so-called ‘DPR anthem’ in order to get a final grade.  He and others learned it so that they could talk about it to notch up the grade, he says, and then promptly forgot it.

This, however, depends very much on a child or young person’s home environment.  If the parents have not been sucked into the propaganda, then the latter will not have much impact on their kids.  Serhiy estimates that there were very few “DPR fans’.

The other factor, like in Soviet times, is the sheer problem of propaganda encountering reality.  According to political analyst Vitaly Sizov, the majority of young people see no prospects in occupied Donbas and are rearing to leave, although some go to Russia, rather than to government-controlled Ukraine.

None of this, however, diminishes the very real danger posed by the constant barrage of ‘Russian world’ anti-Ukrainian propaganda.   The above-mentioned ‘Alphabet of Donbas’, by virtue of the age of the children, has only a few worrying propaganda notes.  However, the school curriculum in the puppet ‘republics’ is full of such propaganda and distorted information.  Even if parents are not themselves taken in, they may not necessarily have the knowledge or ability to provide an antidote to the lies. Given the clear danger in occupied Donbas of expressing any pro-Ukrainian views, they may well also be worried about speaking too openly, especially with younger children.

Russia is also quite simply spending vast amounts of money on propaganda and militarization on occupied Ukrainian territory, with the aim being to inculcate ‘Russian world’ ideology and to raise a generation of Ukrainians who essentially hate Ukraine.