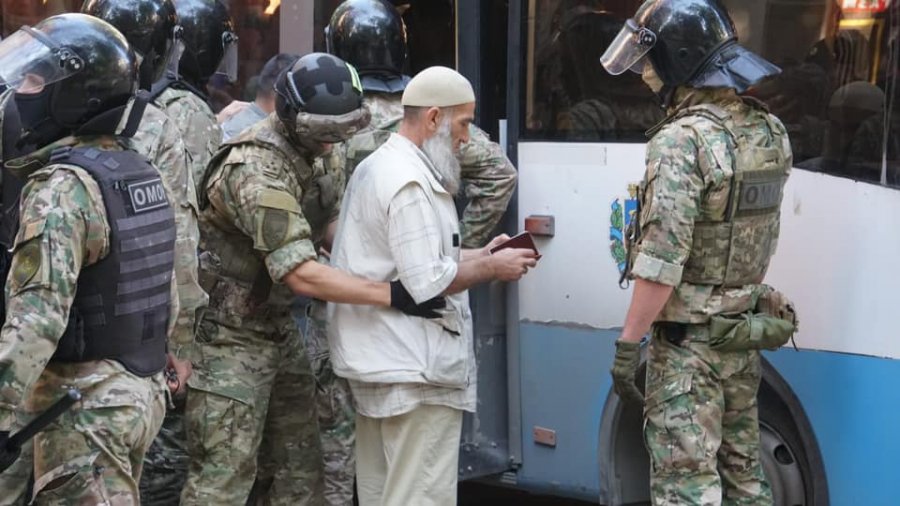 At least 42 Crimean Tatars, including several elderly men, have been detained by enforcement officers in occupied Crimea for peacefully gathering outside the FSB building in Simferopol.  The detained were seeking information as to the whereabouts of Nariman Dzhelyal, Deputy Head of the Crimean Tatar Mejlis and four other men who had not been seen since they were taken away after armed raids on 3 and 4 September.  It was already 21.00 when one of the men’s lawyers was finally able to confirm that the five men are all being held at the FSB building in Simferopol.

The FSB claim that they are investigating an alleged explosion to a gas pipe in the village of Perevalne on 23 August.  The fact that this alleged damage to a gas pipe was reported on 23 August only strengthens suspicion that this new wave of repression is in revenge for Ukraine’s Crimea Platform, a vital international coordination mechanism for achieving de-occupation of Crimea. There is no independent confirmation that any explosion took place, and the report came on the day of the inauguration of the Crimea Platform, which was attended by high-ranking state representatives of  the EU and its member states, of the USA and Canada.  It was also attended by Nariman Dzhelyal.

Worth noting that Aider Azamatov, one of the lawyers trying to find the detained men, reported on Saturday afternoon that no criminal investigation had been launched into the supposed gas pipe explosion.  It is also very ominous that one of the men, Eldar Odamanov (b. 1982) has been held totally incommunicado since early in the morning on 3 September.  His lawyer, Emil Kurbedinov, had spent almost 40 hours trying to find Odamanov, with all police stations and FSB in Crimea denying any knowledge of his whereabouts.  The men who burst into the family’s home very early on Friday morning first removed telephones, preventing Eldar’s wife, Safiye Mamutova, from contacting anybody until after they left, taking her husband away. She says that they also refused to provide any identification or leave documents explaining their actions. Concern was mounting for her husband’s physical safety, and it is clear that the only possible reason for holding Odamanov in custody without a lawyer for almost two days was to torture him into ‘confessing’ to whatever they demanded.  It is ominous also that the FSB are claiming that at least one of the men seized during the night from 3 to 4 September, Aziz Akhtemov, formally rejected the services of an independent lawyer, without such a lawyer having been allowed to see him. 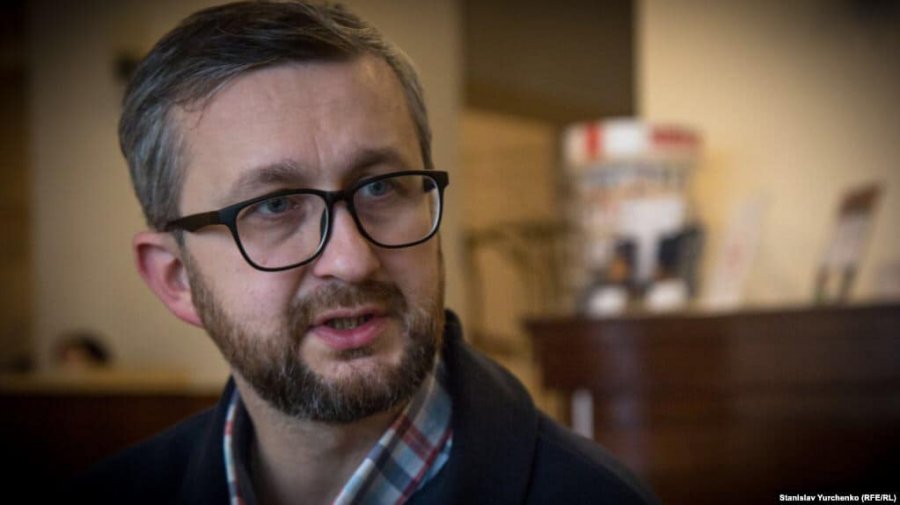 Dzhelyal’s wife, Leviza, reports that the ‘search’ began a little after 7 a.m when around 12 men in masks burst in after knocking on windows and doors.  Dzhelyal himself opened the door to the men and, since she was forced to stay in a separate room with the couple’s four children, she does not know what, if any, documents they provided to identify themselves and explain the purpose of this supposed search. They took Dzhelyal’s phone and laptop away, and left, with Dzhelyal, in an unmarked car and without any indication of where they were taking him.

Dzhelyal’s lawyer, Emine Avamilyeva reports that she arrived at Dzhelyal’s home at the moment that the blue Volkswagen minivan was driving out of the courtyard.  She says that they decided to follow them, but as they began moving, a white Skoda deliberately blocked their path, making it impossible for them to follow whether the minivan was taking Dzhelyal.  The driver of the Skoda had a hood on, mask and glasses.

According to Rebika Akhtemova, the men who turned up in the night immediately took all telephones away, so she was unable to call anybody.  The men were with dogs, and, at some point, suggested that she “rest” as another group would be arriving.  They had trained dogs with them, with the latter supposedly stopping at a bag found in the car which they took away.  Rebika says that the bag was for the thing that pumps up tires, and says that she was standing next to them and saw that there was nothing inside.  They later came and took the car away. The FSB invariably break the law by bringing the supposedly independent witnesses with them, and it is unfortunately likely that the point of these night-time ‘searches’, carried out in circumstances where the men were prevented from contacting lawyers, was to plant supposed evidence.

Whatever pretext Russia comes up with for this new wave of lawless terror, the fact that Nariman Dzhelyal has been targeted makes the real reason very clear.  Dzhelyal has continued to speak out courageously over repression in occupied Crimea and remains the highest-ranking representative of the Mejlis, or self-governing body, of the Crimean Tatar people in Crimea, following Russia’s persecution of other leaders.  Russia is refusing to comply with the order issued by the UN’s International Court of Justice on 19 April 2019 to withdraw its appalling ban on the Mejlis.  Moscow also reacted with hysteria and threats to the inaugural session of the important Crimean Platform on 23 August.  Its actions on 3 and 4 September merely confirm that there can be no restoration of justice and law in Crimea until Russia’s occupation is brought to an end.