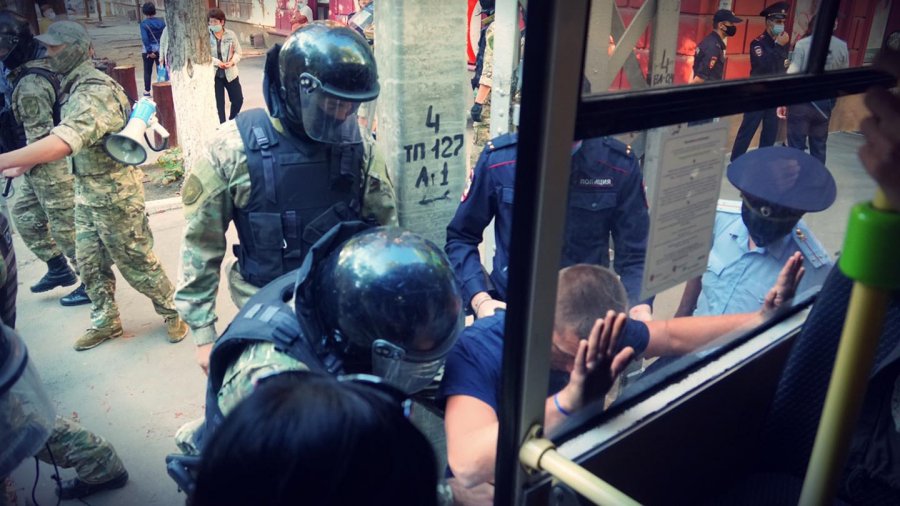 “What is fear?  It is when you are afraid every day that your child, going out to meet with friends, will never return.  When every day you wait for strangers to burst into your home at dawn and take you away, when you are guilty only of loving your Homeland and weeping its tears.  That they will leave your children orphaned and lock you away, not even telling your family where you are.  And your mother will ask Allah that if only her son is alive, she will endure all else. When they can imprison you merely for your faith, for your views, simply over a rashly spoken word.”

These were the words Crimean Tatar poet Lilya Budzhurova wrote in response to the arrest of Nariman Dzhelyal, world-renowned Crimean Tatar Mejlis leader and others.  The sharp escalation in repression from 3 to 5 September was very clearly intended to demonstrate that nobody can feel safe in occupied Crimea.  Although Dzhelyal was obviously the main target, the occupation enforcement bodies also staged a major crackdown against relatives, friends and members of the Crimean Tatar community who responded to the feared abduction of Dzhelyal and four other men by gathering peacefully outside the FSB building in occupied Simferopol.  The father of one of the men whose whereabouts were concealed after an FSB night raid, and the brother of another, have been jailed for 10 and 15 days, respectively, while 56 other Crimean Tatars are facing administrative prosecution and likely large fines.

It was only late on 4 September that the FSB even confirmed, after constant denials, that all five men: Nariman Dzhelyal; Asan Akhtem; Aziz Akhtem; Eldar Odamanov and Shevket Useinov were in their custody.  All of their lawyers were, however, prevented from seeing them.  Dzhelyal was held for over 24 hours in a basement, in handcuffs, and with a bag over his head.  Given the enforced disappearances of other prominent Crimean Tatar activists since Russia’s invasion, it seems clear that this was intended to maximize the psychological pressure against him.

It was only on 6 September that the charges in all cases were learned.  There is every reason to believe that the reason for such behaviour was that the men were being tortured to force out a ‘confession’ or false testimony against the others.  The fact that the ‘investigator’ in the gas pipe case is Vitaly Vlasov is also of concern, as he is also involved in the political trial now underway of RFE/RL journalist Vladislav Yesypenko.  The latter was also long prevented from seeing a proper lawyer and has since given a detailed account of the torture methods applied. 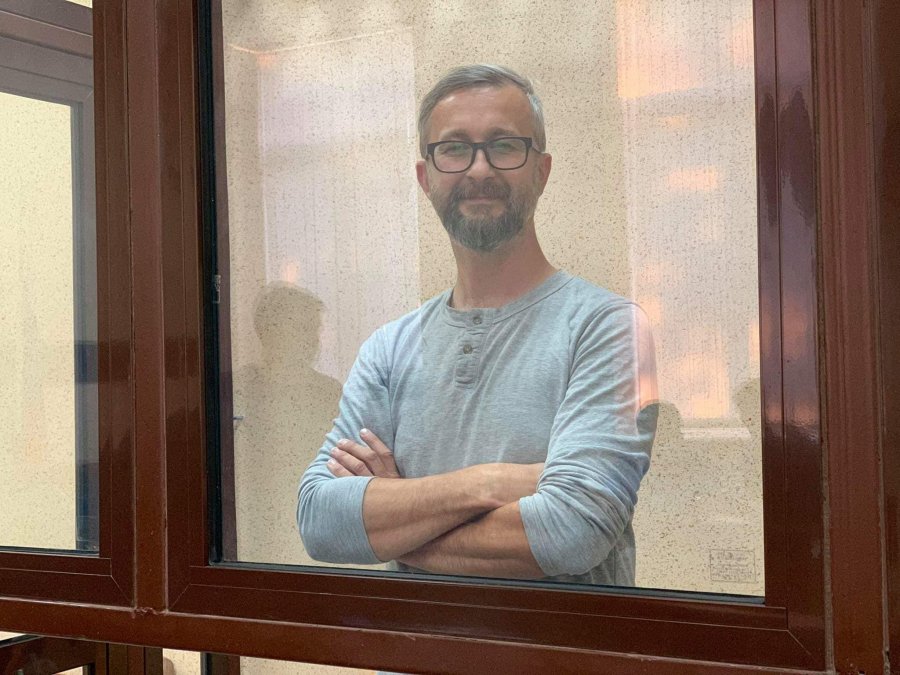 As reported earlier, the criminal charges that the First Deputy Chairman of the Mejlis is facing together with two other men: Aziz Akhtem and his cousin, Asan Akhtem, seem evidently linked with the inauguration of the Crimean Platform international coordination mechanism and Dzhelyal’s involvement in it.

There may very well have not been the ‘act of sabotage’ that Aziz and Asan Akhtem are accused of carrying out and Dzhelyal of abetting.  Suspicion is aroused by the timing, with damage to a gas pipe in Perevalne in occupied Crimea reported while Ukraine’s leaders, including Dzhelyal and other top members of the Mejlis, or self-governing body, of the Crimean Tatar people, and high-ranking representatives of the EU, EU countries; the USA and Canada were attending the inaugural meeting of the Crimea Platform.

Even if there was evidence against the Akhtems, and this seems unlikely, the attempt to link it with Nariman Dzhelyal is absurd.  It does, however, follow the imprisonment for two and a half years of Akhtem Chiygoz, who was then the Deputy Chairman of the Mejlis, the persecution of another Mejlis leader Ilmi Umerov, and several politically motivated arrests and ‘trials’, which Russia staged in an attempt to discredit the Mejlis.  Early in 2020, Russia reacted to a planned March of Dignity on Crimea by bringing the same surreal charges used earlier against Chiygoz against exiled Mejlis Chairman Refat Chubarov and entirely insane charges against veteran Crimean Tatar leader Mustafa Dzhemilev.

Russian lawyer Nikolai Polozov, who represented Chiygoz, is now representing Dzhemilev and who was prevented from acting for Chubarov, has now taken over the ‘case’ against Dzhelyal.

The Russian-controlled Kievsky District Court in Simferopol remanded Dzhelyal in custody for two months, until 4 November.  In addressing the ‘court’, Dzhelyal, who has small children, pointed out that he could have faced such criminal charges since 2014, “however each time, despite such threats and requests from friends that I leave Crimea, I return home to my motherland.  I recently visited the inaugural summit of ‘Crimea Platform’ which is viewed very negatively by the Russian authorities,.  There were public statements from the Crimea leadership about prosecution of participants in the Crimea Platform, yet despite such statements and threats, I returned home. <> I have absolutely no wish to leave Crimea and my own home”.

Dzhelyal’s imprisonment was undoubtedly the point of all the events from 3 September and his detention was anticipated, with Asan and Aziz Akhtemov also remanded in custody until the same date.  The two-month period, it should be stressed, is purely a requirement of the criminal procedure code, and will almost certainly be extended.

It is of immense concern, and indicative of the methods used, that independent lawyers, who have agreed with the family to represent Asan and Aziz Akhtemov have still not been allowed to see them.  Any claim from Vlasov that the men themselves have rejected the services of independent lawyers cannot be believed if the men are effectively being held incommunicado.  As reported earlier, in all cases where access has been blocked, the detained Ukrainians have later confirmed that they were being subjected to torture.

The FSB ‘operation’ began early on 3 September with an armed search of the home of Eldar Odamanov.  He was taken away, with lawyer Emil Kurbedinov fruitlessly searching for him until the FSB confirmed that they were holding all five men late on 4 September.  During the night from 3-4 September, there were armed raids of three homes, those of Asan and Aziz Akhtem and that of Shevket Useinov.  It was only on 6 September that anything more was heard of Useinov.

In both cases, the men were accused only of administrative ‘offences’ (disobeying an enforcement officer under Article 19.3 of Russia’s Code of administrative offences) with Odamanov jailed for 14 days, Useinov for 15.  This is, at very least, not in the FSB’s style, however Polozov has confirmed that neither man has been charged over the gas pipe, nor is their testimony part of the case material.

It is possible that this has been done deliberately to sow distrust, however few doubt that the FSB have methods (including electric currents attached to earlobes, fingertips or genitals) that would make anybody agree to sign the documents demanded of them.  It is precisely because the FSB know that such ‘confessions’ may be retracted in court that they try to prevent men from having proper lawyers.

As reported, there were mass detentions on 4 September as relatives were joined by other members of the Crimean Tatar community in trying to find out where Dzhelyal and the other men were being held.  Those detained included women and some elderly men, with the enforcement officers using gratuitous force against entirely peaceful citizens.   Most of those detained (at least 42 people) were released late that evening, except Eskender Akhtemov, the father of Aziz, and Arsen Akhtem, Asan’s brother. Both were charged on 6 September under Article 19.3 of Russia’s Code of administrative offences with ‘disobeying an enforcement officer’.  Eskender Akhtemov, who had seen his son taken away, and now facing a potential 15-year sentence on politically motivated charges, was jailed for 10 days, Arsen for 15.

Neither they, nor the other people gathered outside the FSB offices on 4 September had committed any offence, yet the Russian occupation enforcement bodies have issued administrative offence protocols against 56 people under Article 20.6.1 of the same Code.  Russia has used this norm since the beginning of the pandemic to still further eliminate any possibility of peaceful protest, while allowing Russian tourists to travel to Crimea without restriction and various pro-Russian public events.  These will almost certainly be conveyor belt ‘convictions’, with fines from 10 to 50 thousand roubles.