FSB claim that tortured Ukrainian journalist Yesypenko came to them himself 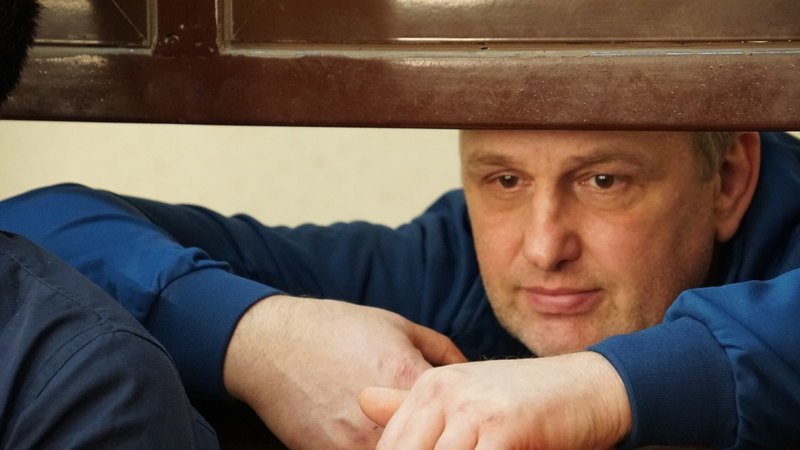 During the latest hearing in the internationally condemned trial in Russian-occupied Crimea of Vladislav Yesypenko, an FSB officer claimed that they released the Ukrainian freelance journalist after detaining and then questioning him, and that he appeared “voluntarily” the following day for further ‘investigative activities’.  Lawyer Dmitry Dinze notes that the officer was unable to explain how Yesypenko came to be in FSB custody and all kinds of other technical questions.

During the hearing on 6 September, Yesypenko reiterated that he is innocent of the charges and described how the FSB, and specifically, Major Denis Korovin, planted a grenade in his car.  This was supposed to have been found lying around which is strange since it did not have Yesypenko’s fingerprints on it.  He also spoke of how they had tortured him into providing the demanded ‘confession’, by, among other things, attaching wires to his earlobes and neck and turning on an electric current.  He accuses Korovin of having taken part in the torture, and of having later made ‘visits’, aimed at putting maximum psychological pressure on him to stay with the ‘confession’ tortured out of him, and not his retraction of this.

Dinze also reported that the torture Yesypenko endured has clearly had a huge impact on his psychological state and he suffers panic attacks. He is in a depressed state, believes he is in danger because of warnings he received from the FSB of the trouble he could expect, the long sentence, etc. if he retracted his ‘confession’.  He takes the FSB’s threats seriously and does believe he is in danger.

Dinze also mentions the ‘lawyer’, Violetta Sineglazova who was foisted on Yesypenko while independent lawyers were being prevented from seeing him. Sineglazova ignored his statement that he had been tortured, and simply told him to stand by this ‘confession’.  ‘Investigator’ Vitaly Vlasov also tried to convince him to ‘confess’, saying that otherwise he would get a huge sentence.

Such methods are now being applied, including by ‘investigator’ Vlasov, in the abduction-like arrests of Deputy Chairman of the Crimean Tatar Mejlis, Nariman Dzhelyal and four other men.

Yesypenko is, on the basis of this one grenade, charged with illegal preparation and possession of a homemade explosive device.  The charges are far removed from the ‘spying’ that he ‘confessed to’ under torture.

Yesypenko lives in mainland Ukraine with his wife and small daughter, but has contract work as a journalist for Radio Svoboda’s Crimean Service [Krym.Realii].  His arrest on 10 March was an attack both on individual journalists and on Krym.Realii, which is one of the only independent sources of information about life and repression in occupied Crimea.

The arrest came a day after he took part in laying flowers at the monument to the great Ukrainian poet Taras Shevchenko on the 2007th anniversary of his birthday. Just as in Soviet times, it has become an act of civic courage to take part in such ‘events’ which are known to be closely followed by the FSB.

Yesypenko was stopped by traffic police on the way to Simferopol, with the FSB then turning up and forcing him to the ground before the ‘search’ which is supposed to have found a grenade. Yesypenko refused to sign the protocols of this ‘search’ and was told by an FSB officer in a balaclava that they would take him to another place where he would sign everything they told him to.

The initial announcement from the FSB on 16 March claimed to have “broken up spying and sabotage activities for the Ukrainian Security Service by Russian citizen Vladislav Yesypenko.”   The actual activities described in the report were those of any journalist, with Yesypenko having “taken photos and video footage of infrastructure and places where there are a lot of people in the republic of Crimea”.

The FSB prevented him from seeing a proper lawyer for around a month, almost certainly to ensure that the torture marks were not formally recorded.  It was only during the first hearing, on 6 April, that the journalist was able to formally reject Sineglazova’s ‘services’ and state that he wished to be represented by independent lawyers.  He also described to the court the torture that he had been subjected to.

He has since also spoken of the threats he received from the FSB after that hearing.  See:  Imprisoned Ukrainian journalist told the FSB “will work him over until he croaks it”

RFE/RL President Jamie Fly immediately protested over Yesypenko’s arrest and demanded his release.  These calls were reiterated on 14 April by the European and International Federations of Journalists