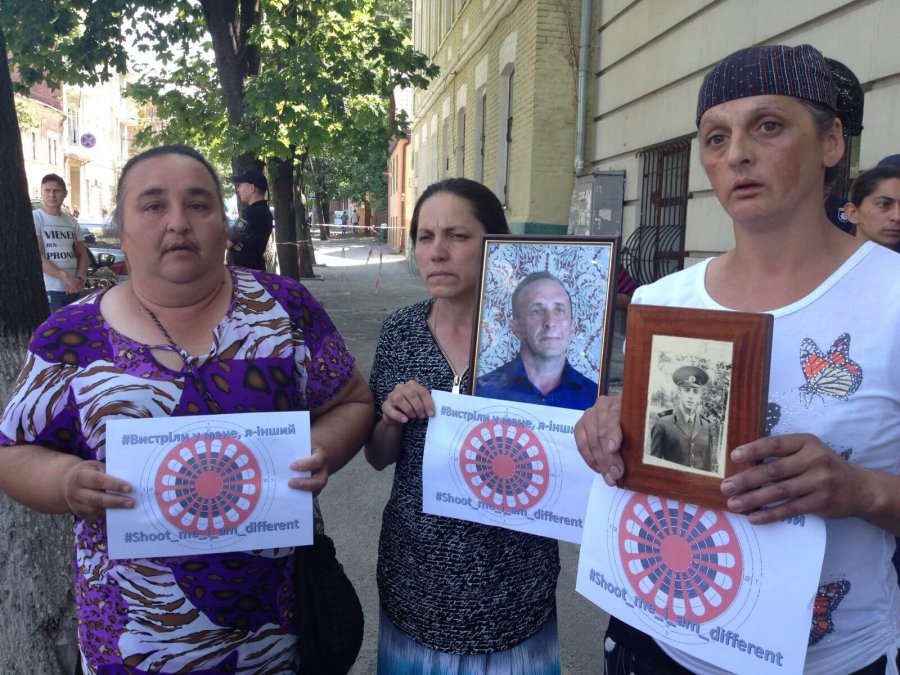 Relatives of Mykola Kaspitsky holding a photo of him and demanding justice back on 7 June 2017 Photo MediaPort. They are still waiting in September 2021

There is mounting frustration among the Vilshany Roma community and human rights defenders at attempts to shield one of the key suspects in an appalling attack on the community and murder of its informal leader, Mykola Kaspitsky.  While it is the prosecutor’s office that keeps terminating the criminal investigation with respect to Yevhen Kryvoruchko, it was the police who sabotaged the latest court hearing in the legal challenge against a fourth such termination.

The hearing, scheduled for 8 September 2021 at the Zhovtnevy District Court in Poltava, could not take place because the Derhachy District Police Station had not provided the case material regarding Kryvoruchko, one of the key figures in the case. This was no mere oversight, with the court having asked several times for the material.  Vadym Matiushenko, Head of the Kharkiv Romen National Cultural Society, was scathing in his response, saying that the police are immersed in corruption.

Any such sabotage is likely to have impact on the case generally, and the trial now moving, very slowly, of two prominent Kharkiv region politicians.  According to Stanislav Myronenko, the lawyer representing Kaspitsky’s family and other victims, of the three suspects, there is most evidence against Kryvoruchko.  Yet the decision by the Poltava prosecutor’s office, on 29 January 2021, to terminate the investigation against Kryvoruchko was the fourth in four years.  Legal challenges have earlier been successful, which is presumably why this court hearing is simply being obstructed.

In early February this year, Myronenko explained to a Graty correspondent that he had sent complaints to various parliamentary committees over what he called “abuses” in the constant termination of the investigation.  MPs reacted by appealing to the Prosecutor General’s Office.  The latter, however, sent it on to Poltava.  The Poltava Regional Prosecutor’s Office had, he explained, sent him a letter stating that a preliminary investigation was continuing.  Several days later, there was the fourth decision to terminate the proceedings.   This, he insists, is “one of the worst violations in this case.  Of all three suspects, there is most evidence against Kryvoruchko”.

Graty also spoke with Matiushenko who said that, according to his information, a forensic examination found gunpowder on Kryvoruchko’s jacket.  There are also eyewitness accounts which makes the persistent moves to remove the local businessman from this case extremely disturbing.

Mykola Kaspitsky was 49 and the informal leader of the Roma community in Vilshany (Olshany in Russian), a small town / urban settlement around 30 kilometres from Kharkiv.  Ruslan Kaspitsky, who was 17 at the time of the tragic events on 16 May 2017, has told the court what led up to the attack.

He explained that, three days earlier, he had been in Vilshany with some friends when Andriy Lytvynov, the Mayor of Vilshany, drove up to them.  According to Ruslan, Lytvynov was “drunk and looking for entertainment”.  The latter he presumably found in opening the window and hurling racist abuse at them (calling them ‘Gypsies’, and making one other insulting comment).  Ruslan turned around and asked him why he was saying that, at which point Lytvynov got out of the car, grabbed the lad and threatened to strangle him, butting him in the head.  Ruslan says that he reacted by lashing out at Lytvynov, who threatened that if he hit him again “there’ll be war”.

Lytvynov was not very much older than Ruslan, but, at 30, had become Mayor after his father, Oleksiy Lytvynov, relinquished the post, going on to be elected to the Kharkiv Regional Council.  It is clear from Ruslan’s testimony that the family wield considerable influence in the area.

After hearing of this treatment of his son, Mykola Kaspitsky phoned the local police officer.  Typically, the officer dissuaded Kaspitsky from filing a formal complaint against Lytvynov and convinced him to simply ring Andriy Lytvynov directly. During that phone conversation, Lytvynov claimed to have not known that Ruslan was Kaspitsky’s son, but also threatened to shoot the lad in the legs if he caught him.  Kaspitsky appears to have been quite conciliatory, simply stressing that his son was a young kid and that if there were any complaints about Ruslan, they should address them to him, as his father.

It was seemingly at this point that Lytvynov proposed a meeting on 16 May, at the council building.  Kaspitsky arrived that morning, to find both Andriy and Oleksiy Lytvynov standing by the building, together with Kryvoruchko, a family friend, and some other men, reportedly in masks.

It was Oleksiy Lytvynov who took an aggressive tone and demanded, using insulting language, that he call “other Gypsies”, or he would come himself and get them evicted from their homes.  During one of the hearings, one of the Lytvynovs’ lawyers claimed bemusement, saying: “you live in your own homes, how could they evict you?”.  Ruslan’s response was succinct: “They could”.

Mykola Kaspitsky called his brother, who now lives in a neighbouring town, as well as other members of the community. They took spanners and other such items from their cars to use, if necessary, in self-defence, but were, otherwise, unarmed.

Ruslan says that, counting the Lytvynovs and Kryvoruchko,  there were around 25 men.  He did not see the Lytvynovs holding weapons but is convinced that Kryvoruchko and several other men were armed.

Although Ruslan speaks of his father and uncle having held “negotiations”, these appear to have lasted a minute or so, and involved Oleksiy Lytvynov abusing them, and then nodding in the direction of a jeep from which men in masks and camouflage leapt out and began both beating the Roma and shooting at them.   Kaspitsky and the others began running, but there was one loud shot and a little later, Ruslan heard his mother shouting that they had killed his father.

Mykola Kaspitsky was not killed outright, but lost consciousness.  His wife shouted to Oleksiy Lytvynov to save her husband and Lytvynov did drive him to the hospital – in the boot of his car.  After the car took Kaspitsky away, the assailants continued shooting at the Roma, injuring ten others, although not fatally.  Three people needed to be hospitalized.  Typically, it was the medical staff who reported the attack to the police, with the latter trying to claim that this was conflict that had occurred “on the basis of longstanding domestic misunderstanding”.

There were grave irregularities from the outset. The Head of the local prosecutor’s office reportedly turned up after Oleksiy Lytvynov and some other men were taken into custody and helped Lytvynov go home and get rid of the clothes that he had been wearing, thus destroying crucial evidence.

In 2018, charges against both Lytvynovs of causing a mass riot with grave consequences were passed first to the (neighbouring) Derhachi District Court, and then to the Kharkiv District Court.  Oleksiy Lytvynov is in addition charged with murder to conceal another crime.

This rather bizarre formulation seems aimed at concealing the hate crime nature of the crime.  The prosecution is claiming that Mykola Kaspitsky was murdered because he had information which he could divulge about who the hired thugs were and who was paying them.  This is especially implausible as a motive given that there would almost certainly have been no real criminal proceedings had it not been for the death of Mykola Karpitsky.

Kryvoruchko and Lytvynov were soon placed only under night-time house arrest, although there was every reason to assume, as the prosecutor suggested, that Lytvynov would put pressure on witnesses.   Kryvoruchko was quietly removed from the case altogether, despite the obvious evidence against him.  This may well have ramifications for the case also against the Lytvynovs which could collapse in court.  All of this seems frustratingly clear, yet the sabotage continues.