Czech Republic passes record 21-year sentence for terrorism in militant-controlled Ukraine Czech Republic sentences Donbas fighter to 20 years on terrorism charges Czech gets 15 years on terrorism charges for fighting for Russian-controlled Donbas militantsCzech gets 3-year sentence for fighting in Donbas on side of Russian-controlled militantsLatvian resident sentenced to five years for Russian-paid fighting in DonbasRussian propaganda chief Kiselyov gets his nephew jailed in Germany for involvement in war in UkraineCzech national charged with terrorism after fighting for Russian-backed militants in UkraineBriton jailed on terrorism charges for fighting with Russia-backed militants in UkraineBriton charged with terrorism for involvement with Kremlin-backed militants in DonbasNot in Our Name: Journalist NGOs Should Condemn Propagandist Graham Phillips’ Torture StuntMaimed Ukrainian Hostage Finally Exchanged by Kremlin-Backed MilitantsKremlin-backed militants to put maimed and tortured hostage on ‘trial’Tortured Ukrainian ‘Sentenced’ by Kremlin-backed militants to 30 yearsDonbas militants could sentence Ukrainian hostages to death for ’spying’Kremlin-backed Donbas militants threaten to execute Ukrainian prisonersPraised on Russian radio for war crimes in Crimea & DonbasSloviansk torture, killings, execution orders, yet still no proper investigationFamilies of murdered hostages demand proper investigationMurdered in SlovyanskUS journalist released, others still held hostage in Slovyansk
• Topics / Terrorism 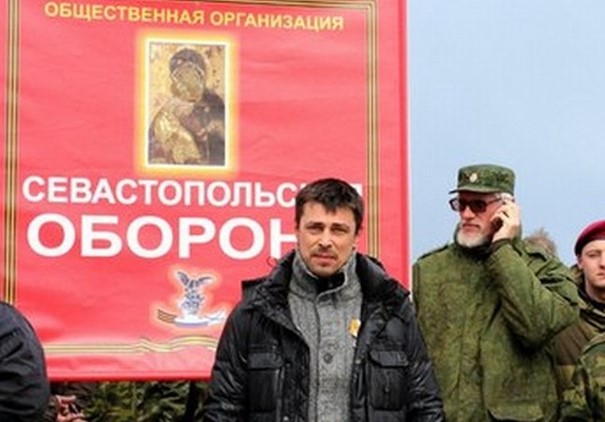 Ukraine is seeking the extradition of Aleksandr Franchetti, a former Russian paramilitary who played a significant role in Russia’s invasion and annexation of Crimea and  is reported by Myrotvorets to have received one of the Kremlin’s medals ‘for the return of Crimea’.  Franchetti also has residence status in the Czech Republic, and was detained on Sunday evening, 12 September, at Prague Airport on the basis of an international warrant issued by Ukraine.  His detention has been closely followed by Russian and Russian-controlled Crimean media and politicians, with Aleksandr Molokhov, a member of the occupation ‘government’ describing the move as “a dangerous precedent”.   This is very much to be hoped, and certainly the Czech Republic has been particularly active in prosecuting its own nationals and residents for fighting on the side of the Russian-controlled militants in occupied Donbas.

Franchetti was ‘commander’ of a group called ‘North Wind’ [“Северный ветер»] within the so-called Samooborona, or Self-Defence paramilitaries, who helped Russian soldiers without insignia seize control of Crimea in February – March 2014.  It is the paramilitaries who are suspected of many of the abductions and torture of pro-Ukrainian activists; the killing of Reshat Ametov and the enforced disappearances (and probable killings) of several Crimean Tatar and other Ukrainian activists.

In Ukraine, Franchetti faces prosecution under Article 260 § 2 of the Criminal Code for the creation or participation in an unlawful armed formation and, if convicted, a sentence of from three to eight years.

Franchetti appears to have walked into his legal trouble himself by providing at least two interviews.  The first, from April 2015, was with Dejan Berić [nom de guerre Deki], a fighter for the Russian / Russian-controlled militants in the so-called ‘Donetsk people’s republic’.  The second was to a Russian journalist in occupied Sevastopol on 13 May 2015.  While even admission of direct war crimes has been ignored by Russia, as long as the perpetrators were fighting on the Russian-controlled, armed and financed side, Franchetti forgot that what goes on the Internet can easily be accessed by the Czech and Ukrainian authorities.

Franchetti claimed that he had arrived in Sevastopol on 25 February 2014, two days before Russian soldiers without insignia seized control.  He had, he asserted, within the next three days formed his ‘North Wind’ group of 12 ‘forest rangers and ‘tourists’ able to move stealthily about in the forest and “read tracks”.

In July 2019, Czech Radio published a report entitled: Russian annexation of Crimea with a Czech footprint.  They had tracked down “the leader of a Sevastopol ‘intelligence group’ who has permanent residence in the Czech Republic where he works as a fitness trainer.  The report specifically mentions the interview given four years earlier, and quotes Franchetti as describing how his ‘North Wind intelligence group’ had “aimed to eliminate the penetration of various groups on the territory of Sevastopol. We divided the district into sectors where there were still patrols, both moving and immovable. We watched the surroundings, the movement of cars, unusual cars, we looked for shelters.”  He claimed (fairly implausibly) that they had not themselves had arms but had provided such information to the Russian Navy.  The 2019 Czech report notes that, like other paramilitaries, Franchetti and his group reported directly to senior Russian military officers, and quotes a Czech political analyst, Petr Pojman, as saying that the paramilitaries’ role in the invasion was as important as that of the professional Russian soldiers. Pojman went on to describe such groups, as that of Franchetti’s, as essentially terrorist, having taken part in the illegal occupation of Crimea and, as such, having committed acts of terrorism on Ukrainian sovereign territory.

Czech Radio cited a source within the security service as saying that Franchetti had had permanent residence in the Czech Republic since 2000.  In 2019, he was reported to be dividing his time between Prague and occupied Crimea.

When tracked down by the radio station, Franchetti claimed that he had travelled to Crimea, on 25 February 2014, all on his own initiative.  This, he alleged, was because Ukrainians were planning a series of attacks and he wanted to protect Russian citizens.  He named incredible amounts of ammunition and firearms that he claimed his group had found and asserted that they had handed one group of supposed assassins to the Russian army.  He denied that he and his group had done anything illegal, as per international law.  Franchetti earlier asserted that Deki had been a member of his group in Crimea and that “it was thanks to him that we detained a quite large group of extremists – eleven people”.

There is, it should be stressed, no evidence that any such group or cache of arms ever existed, and the only recorded acts of violence were by paramilitaries or members of the Russian military.

Ukraine’s Crimean Prosecutor announced on 29 July 2019 that it was bringing criminal charges under Article 260 § 2 against Dejan Berić for his role in ‘North Wind’.  No mention then was made of Franchetti.  This may have been in order to enable Ukraine to catch him, since he would certainly not be handed over by Russia.  Graty reports that on 6 August 2019, the Czech authorities officially confirmed that Franchetti was in their country and Ukraine placed him on the international wanted list.  In February 2020, an arrest warrant was issued by the Holosiyv District Court in Kyiv, and an official extradition request subsequently placed with the Czech Ministry of Justice.  According to a spokesperson from Ukraine’s Ministry of Foreign Affairs, Franchetti’s arrest on 12 September was the result of cooperation between the Czech and Ukrainian authorities.  This does not necessarily guarantee that Franchetti will be extradited, but there certainly appears to be a lot of evidence against him, much of it which he himself obligingly provided.

The Czech Republic has taken the lead among European countries in very robustly seeking and prosecuting men who have fought in Donbas on the side of the Russian / Russian-backed militants.

On 9 September 2021, yet another Czech national, Jiří Urbánek was sentenced to 20 years by the Municipal Court in Prague, with the charges of membership in a terrorist group and carrying out a terrorist attack.

If Urbánek is believed to be in Donbas now, and was sentenced in his absence, some men have been caught and prosecuted and others are facing terrorism charges now.