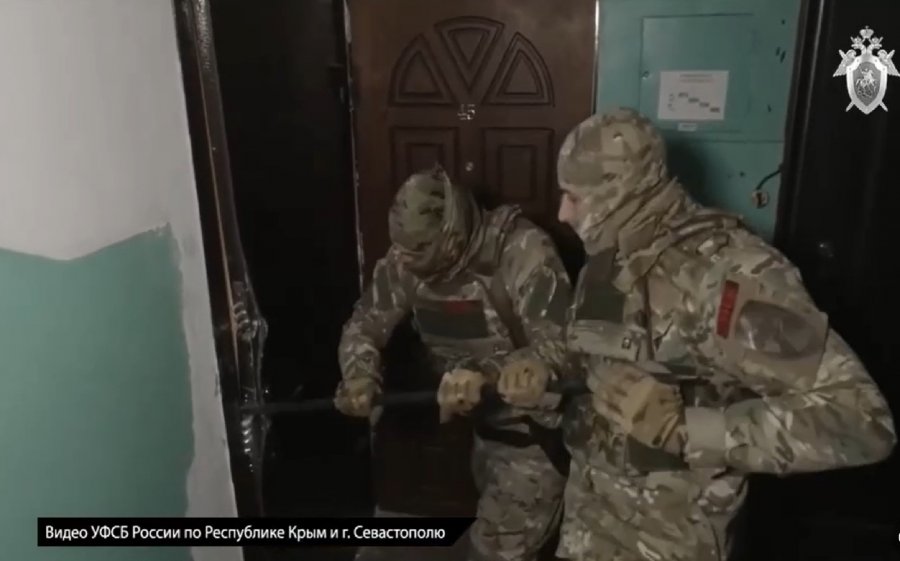 Serhiy Lyulin was seized by FSB officers while in Russia, thrown into the boot of a minivan and driven, in handcuffs and bound with scotch tape, for 16 hours to occupied Simferopol.  He is one of an ever-increasing number of Crimean Jehovah’s Witnesses facing violent FSB ‘operations’ and imprisonment for worshipping together and discussing the Bible.  Lyulin is now remanded in custody, in a ‘special bloc’ cell with world-respected Crimean Tatar leader and political prisoner Nariman Dzhelyal.

Russia’s persecution of Jehovah’s Witnesses became ‘official’ in April 2017 and has been gathering pace, and victims, since then.  If, however, in Russia itself, many of the sentences are suspended, in Russian-occupied Crimea, three ‘trials’ have so far reached verdict stage, with each resulting in shocking six and six-and-a-half-year sentences (against Serhiy Filatov; Artem Gerasimov and Viktor Stashevsky).. 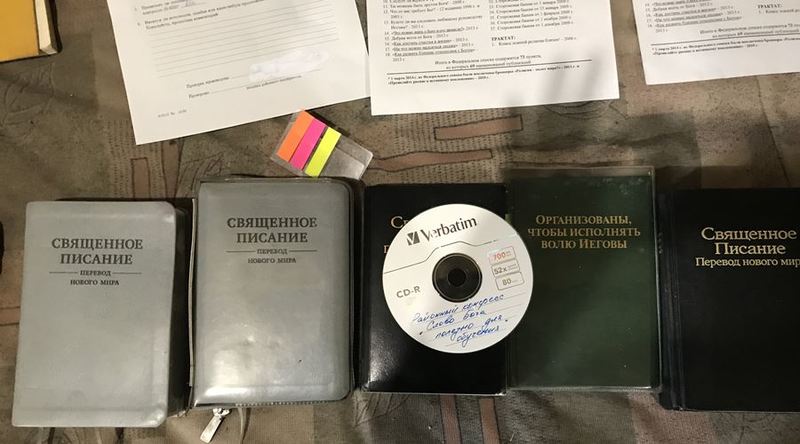 Material shown as ’evidence’ during an FSB search in Yalta. The books are all copies of the Holy Scriptures

According to the Crimean Human Rights Group, at the end of August four Jehovah’s Witnesses were deprived of their liberty and six were under house arrest.  Eight believers are restricted in their movements, and two have been forced to sign undertakings not to leave the area where they are registered.  The scale of persecution, like that against Crimean Tatars, makes it difficult to keep up with all of the armed searches and criminal charges laid.

At least one of the ‘FSB investigators’ persecuting Jehovah’s Witnesses, Vitaly Vlasov, is also notorious for his methods (primarily torture) in the cases of Nariman Dzhelyal; Asan and Aziz Akhtemov, as well as of Ukrainian journalist Vladislav Yesypenko.

On 2 August, Vlasov initiated charges of ‘organizing the activities of an extremist organization’ (under Article 282.2 § 1 of Russia’s criminal code) against two men: 60-year-old Oleksandr Lytvyniuk and Oleksandr Dubovenko (48).  The charges, which carry a sentence of up to 10 years’ imprisonment, are over a Zoom conference which Vlasov & Co. claim was to “attract new members of a banned organization’.

On 5 August 2021, there were armed searches in the homes of at least eight believers. The JW report says that these ‘officers’ tried to force their way into one place by summoning the communal services to turn off the plumbing.  Dubovenko was not at home, but searches lasting 9 hours were still undertaken of both his home and that of Lytvyniuk.  They removed computers; personal notes in which the men mention the Bible and documents, including those confirming ownership of their flats.  Lytvyniuk was held in detention over night and then, on 6 August, placed under house arrest by Aleksandr Dolgopolov, a ‘judge’ from the Russian-controlled Kievsky District Court.  His colleague, Yevgeny Pronin placed Dubovenko under house arrest after the latter was detained on 9 August.

The above-mentioned ‘judge’ Pronin also issued a search warrant on the basis of which a two-hour search was carried out in the home of a person who is bedridden.  The ‘officers’ even called an ambulance crew to get medical confirmation of the man’s condition.  The search followed a criminal investigation initiated by a senior investigator identified only as V.A. Novikov. He is behind the criminal charges against both Taras Kuzio and his wife, Darya.  It appears that in this case, their ‘information’ that Jehovah’s Witnesses were meeting at the flat to discuss the Bible were false.

One of the places where the FSB seem most active is Yalta, with many of those now facing charges, including Lyulin, linked with the so-called ‘Case of Tatas Kuzio’.

Taras Kuzio (b. 1978) was first mentioned as facing charges after armed searches on 20 March 2019, in the second of at least four major armed ‘operations’ against Jehovah’s Witnesses in occupied Crimea.  On that occasion, however, the main target was Artem Gerasimov who was sentenced to six years on 4 June 2020.

On 4 March 2021, criminal proceedings were initiated against Kuzio by V.A. Novikov, described on the JW site as ‘senior investigation of the first investigative unit of the department on particularly important cases of the Investigative Committee in Crimea and Sevastopol.  Kuzio is also facing the more serious charge under Article 282.3 § 1, but he is accused of ‘financing an extremist organization’ (Russia’s excuse for violating its own Constitution was to call the Jehovah’s Witnesses ‘extremist’).

13 armed searches, including of the home of Serhiy Lyulin,  were carried out on 11 March by the Investigative Committee and FSB, accompanied by Russian-controlled police and OMON [riot police] officers.  The searches were ‘authorized’ by Kievsky District Court ‘judge’ Viktor Krapko.  Four believers were interrogated, with Kuzio detained.  It seems that the following day, Krapko did at least reject Novikov’s application for Kuzio, who has two young children, to be remanded in custody and placed him under house arrest.

On 29 July, 33-year-old Petro Zhiltsov was also detained.  He had earlier been interrogated as a ‘witness’ in the case against Kuzio, however Novikov initiated identical charges (under Article 282.2 § 1), accusing Zhiltsov of both financing and of organizing the so-called ‘activities of an extremist organization’.  He too faces a sentence of up to 10 years for practising his faith.

On 6 August, it became clear that charges were also likely against Serhiy Lyulin and Tadevos Manukian.

As mentioned, Lyulin was seized in the Russian city of Belgorod and taken by force, handcuffed, bound and in the boot of a minivan, on 10 August 2021.  It seems that Novikov was one of the men who detained him.  He was remanded in custody on 13 August, and initially placed in a cell with 15 other men.  It is likely that it was there that he contracted Covid19.  He is now sharing a cell with Nariman Dzhelyal. There is no information at present about Manukian, however he and Lyulin are also under the more serious Article 282.2 § 1.

Other believers already imprisoned or facing ‘trial’ for their faith

Serhiy Filatov (b. 1972) is a father of four who moved to Crimea from mainland Ukraine many years ago for the sake of his daughter’s health.  He was arrested after the first round of armed searches during the night from 15-16 November 2018 and charged with ‘organizing the activities of an extremist organization’ (Article 282.2 § 1).  He was sentenced to 6 years’ imprisonment on 5 March 2020 by ‘judge’ Maria Yermakova, from the Dzhankoy District Court and taken into custody in the courtroom. That sentence was upheld by ‘judge’ Edward Belousov, from the Crimean High Court, on 26 May 2020.

Artem Gerasimov (b. 1985) was arrested on 20 March 2019 in Yalta and charged with ‘organizing the activities of an extremist organization’ (Article 282.2 § 1).  Gerasimov was originally ‘convicted’ on the same day as Filatov.  Since ‘prosecutor’ Oksana Chuchuyeva had demanded a 6.5 year real term of imprisonment, it seems likely that the steep fine, but no sentence, imposed by ‘judge’ Vladimir Romanenko from the Yalta City Court was merely because Russia wanted to test international reaction to a first illegal prison sentence in occupied Crimea, before imposing a second.  The fine was appealed by the ‘prosecutor’ and on 4 June 2020, the Russian-controlled Crimean High Court sentenced Gerasimov instead to a six-year term of imprisonment.

Viktor Stashevsky (b. 1966) is from Sevastopol. He is married, with two daughters and is also caring for his elderly mother.  He was sentenced by the ‘Gagarin District Court’ on 23 March 2021 to six and a half years’ imprisonment on the same ‘organizing extremist activities’ (Article 282.2 § 1 ) charge, and taken into custody in the courtroom. The ‘judge’ in the case was Pavel Kryllo who has been involved in at least one other politically-motivated sentence (against Ihor Movenko).  The sentence was upheld on 10 August 2021 by ‘judge’ Vladimir Avkhimov from the ‘Sevastopol City Court’.  He was sent in the second week of September to a prison colony in Russia.

On 26 May 2020, armed FSB, Rosgvardia and other enforcement officers burst into four homes in occupied Kerch on 26 May 2020.  Six believers in all were interrogated, and Artem Shabliy (b. 1990) the father of two small children arrested.  He is under a signed undertaking and facing charges under Article 282.2 § 2 ‘involvement in an organization declared extremist’) with the criminal proceedings known to have been initiated by ‘investigator’ Valery Zarubin.  Shabliy is accused of having “drawn others into the activities of an extremist organization” by discussing the Bible with them.

The armed searches on nine Jehovah’s Witness homes in Sevastopol on 1 October 2020 resulted in the arrests of four men: Yevhen Zhukov (b. 1969); Volodymyr Maladyka (b. 1963); Volodymyr Sakada (b. 1970) and Ihor Schmidt (b. 1972).  All of them were remanded in custody the following day, however, detention was, after several months, changed to house arrest.  Zhukov; Maladyka; Sakada, and, seemingly, Oleksandr Kostenko (b. 1991) are to be ‘tried’ in the same ‘case’ with all facing the same ‘organizing extremist activities’ (Article 282.2 § 1 ) charge.

Schmidt spent six months in custody before being placed under house arrest.  He is charged, like Shabliy, with ‘involvement in an organization declared extremist’) under with Article 282.2 § 2.  His ‘trial’ began in April 2021 at the Gagarin District Court in Sevastopol, under ‘judge’ Lyudmila Tumaikina.