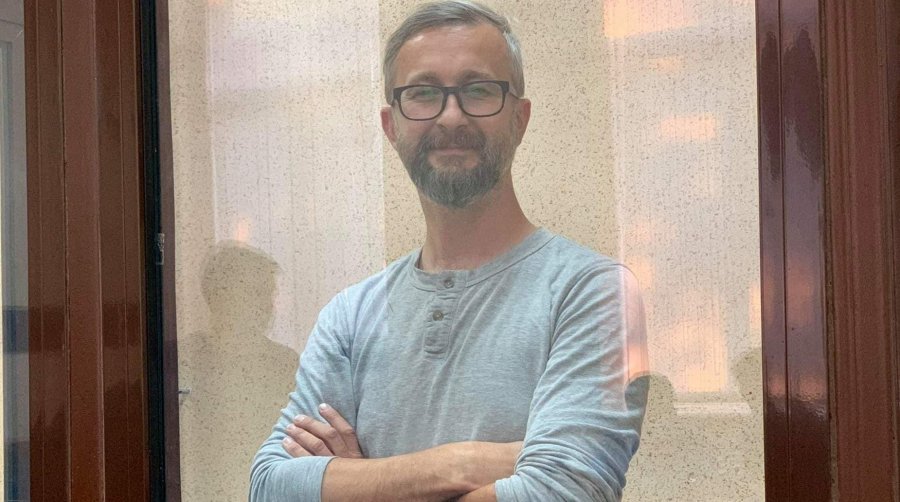 Russia’s FSB have substantially increased the charges against Nariman Dzhelyal which they brought shortly after the Deputy Chairman of the Crimean Tatar Mejlis took part in Ukraine’s Crimea Platform, together with high-ranking representatives of 45 countries.

This is the second time that the FSB have made the charges more severe.  After the armed searches and disappearance of five men on 3-4 September, it was announced that two cousins: Asan and Aziz Akhtemov were accused of carrying out an act of sabotage for Ukrainian Military Intelligence and the Mejlis, while Dzhelyal was supposed to have ‘abetted’ them.  The charges were also escalated against Asan Akhtemov after he retracted his videoed ‘confession’ and explained in detail the torture used to obtain it.  He too is now facing a sentence of from 12 to 20 years.

All of this is despite doubts even as to whether there ever was an act of sabotage and absolutely no grounds for suspecting either the Akhtemovs, or Dzhelyal of any involvement in it.  It should also be stressed that even the original charges elicited outrage from the international community, with demands for the release of all the men from the EU; US State Department; from Human Rights Watch; FIDH [the International Federation for Human Rights] and others.  There is no chance that the videoed ‘confessions’ increase the FSB’s credibility, especially since the Akhtemovs were only finally able to see proper lawyers after the European Court of Human Rights [ECHR] intervened.  Both men stated that their ‘confessions’ had been tortured out of them.  It is likely that the FSB will try to claim that they found something incriminating during the searches of the Akhtemovs’ homes. Scepticism here is fully warranted, since these were armed raids in the middle of the night, with all mobile telephones immediately taken away so that lawyers and family were not informed.  Even the men’s whereabouts were unknown until late on 4 September, and neither of the two Akhtemovs were able to see their own lawyers for almost 10 days.  It is also highly suspicious that five men were seized between 3 and 4 September, with the other two men both held incommunicado for even longer, before being jailed for 10 and 15 days. It is, unfortunately, possible that that period of captivity was used to extract, through torture and threats, false testimony.  As in essentially all of Russia’s politically motivated prosecutions of Crimean Tatars and other Ukrainians, ‘anonymous witnesses’ are used, and there is known to be (at least) one such alleged witness in this case.  Their testimony cannot be verified, and the judges invariably support the prosecutor by blocking any attempts to reveal their identity or to even ask them hard-hitting questions.

The FSB reacted to the details of torture and retraction of the Akhtemovs’ ‘confessions’ by producing yet another of the videos on which Aziz Akhtemov, obviously in physical and mental distress blurts out more supposed ‘confessions’ while his cousin, Asan, remains firmly silent.  They also produced further statements which were widely reported on Russian state-controlled media.  These are clearly aimed at discrediting both Ukraine and the Mejlis [or self-governing] body of the Crimean Tatar people.  For over four years, Russia has been flouting an International Court of Justice ruling which ordered it to revoke its ban on the Mejlis, while also fabricating political ‘trials’, which it claimed, most often falsely, involved members of the Mejlis.  It has now produced some alleged ‘statistics’, such as the claim that 32 “supporters” of the Mejlis have been convicted of ‘extremism’ since 2016 (when the extraordinary ban was imposed).  The report itself, with its evident lies and attempt to demonize the Mejlis, should be retained and used in Ukraine’s case against Russia at the International Court of Justice.  Not only is Russia refusing to comply with the ICJ’s interim measure (the order to revoke the ban on the Mejlis), but it is fabricating criminal cases to slander and discredit the self-governing body of the main indigenous people of Crimea.

The FSB statement on its website on 15 September also claimed, with immense cynicism, that Ukraine’s Military Intelligence [HUR] and the Mejlis had been behind what they call “the protests of the Crimean Tatar population against the lawful actions of the authorities and law enforcement bodies”.  Without even considering the fact that none of Russia’s actions can be lawful in illegally occupied Crimea, this is an outright lie.  There was nothing lawful about the disappearance from early on 3 September of Eldar Odamanov; the night raids on Asan and Aziz Akhtemov and Shevket Useinov, nor their disappearance, as well as that of Nariman Dzhelyal, from early on 4 September.  There was equally little that was lawful about the mass arrests, in some cases with force, of relatives of the men who appeared to have been abducted, and other members of the community who had merely gathered outside the FSB’s building, trying to find out what had happened to them.

Dzhelyal and the Akhtemovs remain in detention and are facing huge sentences in what is obviously an attack both on the Mejlis and the Crimean Tatars it represents and on Ukraine.  The alleged ‘act of sabotage’ was briefly reported on 23 August, during the inaugural meeting of the international Crimea Platform in Kyiv. It is telling that no photos have been provided of the supposed damage to a gas pipe, which was not reported after 23 August until the raids on the above-mentioned men.

Russia had reacted with angry hysteria and threats of reprisals to the Crimea Platform, and it is surely this, and Dzhelyal’s appearance at it, that constitute the real cause of the criminal prosecution now underway.