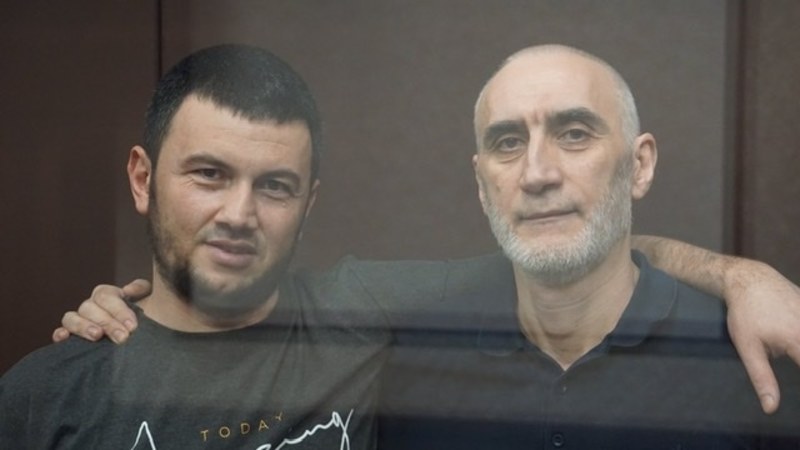 Russia’s FSB have based the ‘terrorism’ charges laid against Oleh (Ali) Fedorov* and Ernest Ibragimov on discussions of religious themes although the conversations were illicitly taped back in 2016 and January 2017.  Even the FSB’s ‘secret witness’ gave testimony five years ago.  A real court would surely want to know how the FSB can call the two Crimean civic activists ‘terrorists’ on the basis of ‘evidence’ that they sat on for almost five years. The ‘trial’ is, however, taking place at the Southern District Military Court in Rostov (Russia) and all ‘judges’ involved in the political trials of Crimean Tatar and other Ukrainian political prisoners do not ask any inconvenient questions.  The case of Fyodorov and Ibragimov is particularly alarming since the FSB have clearly understood that they can improve their statistics on ‘fighting terrorism’ virtually without lifting a finger by rehashing ‘evidence’ which they used to imprison eight Crimean Tatar civic journalists and activists in 2017-18.

Following the hearing on 21 September, lawyer Lilya Hemedzhi was scathing about the case which she considers totally fabricated.  Terrorism is supposed to be behaviour that poses a threat to society yet the FSB are pointing to taped conversations although they did not even bother to ascertain who was speaking for five years.  That fact alone, she says, demonstrates that the arrest of the two men had nothing to do with their discussions on religious subjects in a Bakhchysarai  mosque five years ago.

During the hearing, the protocol of the armed search of Ibragimov’s home was discussed.  During that ‘search’, the FSB claimed to find ‘prohibited’ religious literature in the bathroom.  This is one of many occasions where the FSB have planted religious books in places where no devout Muslim would dream of keeping such books.  When an FSB officer was questioned over this, he claimed that “an elderly mother had wandered around the house, trying to conceal the traces of a crime”.

Russia is using ‘terrorism’ charges and horrific sentences, yet those who carried out the armed searches on 17 February 2021 did not even try to pretend that they were looking for anything except ‘prohibited literature’.   Six men were arrested that day, with all of them activists from Crimean Solidarity who attended political trials; organized parcels for political prisoners and helped the latter’s families.

Ernest Ibragimov  (b. 1980) is the third Crimean Tatar political prisoner who earlier worked (as chef) for the renowned Salachik Cultural and Ethnographic Café.  The café faced constant searches and harassment under Russian occupation and was finally forced to close in 2018.  Fellow chef, Remzi Memetov was arrested in May 2016, while the café’s founder and civic journalist, Marlen (Suleiman) Asanov was arrested in October 2017.  While taking part in flash-mobs, etc. in support of political prisoners, Ibragimov, who himself has four young children, was particularly active in the Crimean Childhood initiative.  The latter arose in response to the ever-mounting number of children whose fathers have been imprisoned on politically-motivated charges.  Following the arrests of Crimean Tatar Mejlis leader and human rights activist Nariman Dzhelyal; Asan and Aziz Akhtemov on 4 September, 195 children are growing up without their fathers.

The indictment against Fedorov and Ibragimov has been copy-pasted from that against Marlen Asanov and seven other Crimean Tatar civic journalists and activists.   Four civic journalists: Asanov; Ernes(t) Ametov; Timur Ibragimov and Seiran Saliyev were arrested in October 2017, together with two civic activists Memet Belyalov and Server Zekiryaev.  The offensive against those who reported on mounting repression and helped the victims became even more brazen on 21 May 2018 with the arrests of Crimean Solidarity coordinator and civic journalist Server Mustafayev and Edem Smailov.

Fedorov and Ibragimov have now been added to this ‘case’, with the charges and, seemingly, the ‘evidence’ identical.  All are essentially accused only of ‘involvement’ in Hizb ut-Tahrir, a peaceful transnational Muslim organization which is legal in Ukraine.  Russia’s Supreme Court declared Hizb ut-Tahrir  ‘terrorist’ in a secretive and unexplained ruling from February 2003, and the ruling is now quite literally being used to sentence totally law-abiding men to 20 years’ imprisonment or more.

In occupied Crimea, the Russian FSB are increasingly using such prosecutions as a weapon against civic activists and journalists, particularly from Crimean Solidarity.

The charges laid are either of ‘organizing a Hizb ut-Tahrir  group’ under Article 205.5 § 1 of Russia’s criminal code, with this currently resulting in sentences of 17-19.5 years’ imprisonment in the harshest of Russian prisons, or of taking part in such a group (Article 205.5 § 2, with the sentences, without any crime, only slightly less shocking).

Fedorov and Ernest Ibragimov are both charged with ‘participation’ under Article 205.5 § 2.  Like the other eight men, they are also accused (under Article 278) of ‘planning to violently seize power’.  No attempt is ever made to explain how men, arrested after armed searches that found no weapons of any sort or any evidence of plans to commit acts of violence are supposed to have intended to achieve such a seizure.

It is likely that the ‘evidence’ in the new case will be that seen against the eight men. This includes two ‘secret witnesses’, whose identity is, in fact, known.  Both are in a vulnerable position in Crimea, with one a fugitive from justice in Latvia.  Despite this obviously making their testimony unreliable and in spite of the lack of any evidence to justify keeping their identity secret, judges invariably allow such anonymity and block questions which demonstrate the flawed nature of such ‘testimony’.

The prosecution also uses ‘expert assessments’ of individuals with no expert knowledge of the subject, but who can be relied upon to claim that this word or that sentiment ‘proves’ support for Hizb ut-Tahrir . Since the conversations used in the charges against Fedorov and Ernest Ibragimov appear to be those against the eight men, it is worth noting that Dr Yelena Novozhilova, an independent and experienced forensic linguist, gave an absolutely damning assessment of the linguistic analysis produced by the two linguistic ‘experts’ - Yulia Fomina and Yelena Khazimulina,

The sentences on 16 September 2020 brought one surprise – the first-ever acquittal of Ernest Ametov. It is probably no coincidence that the FSB have now found another ‘Ernest’ to replace him. The other sentences were absolutely appalling – from 13 to 19 years (details here).  All of the men are recognized political prisoners, with Server Mustafayev also an Amnesty International prisoner of conscience.  The sentences, which are still awaiting appeal, have been condemned by the international community and the men’s release demanded.

The next hearings in the trial of Oleh Fedorov and Ernest Ibragimov are on 18 and 19 October.