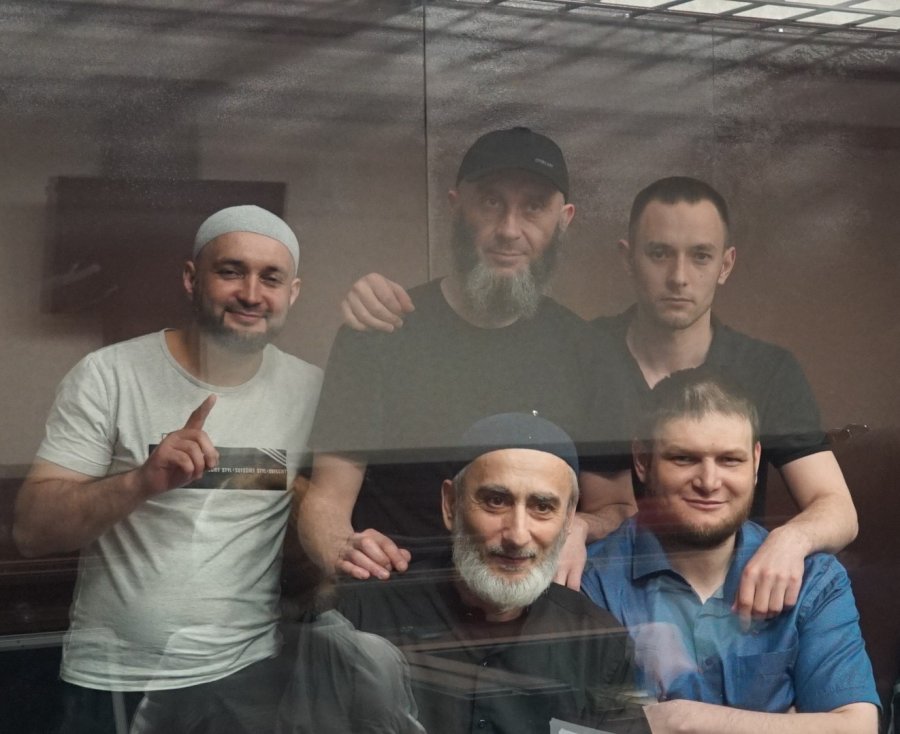 In the trial of Crimean Tatar journalist Remzi Bekirov; human rights activist Riza Izetov and three civic activists: Rayim Aivazov; Farkhod Bazarov and Shaban Umerov, an independent religious scholar has exposed the ‘expert’ used by the FSB in these flawed ‘terrorism’ cases.  Spelling and other mistakes are perfectly forgivable for the person who made a transcript of the covertly taped religious discussion from 2016 that form part of the ‘evidence’.  When the supposed ‘expert’, Mukhammed Zaripov, repeats all of the transcriber’s mistakes, the suspicion clearly arises that he does not know the subject matter.  This is in addition to evidence that the taped discussion is, in fact, a montage with the FSB having refused to provide the original recording.

During the hearing in Rostov (Russia) on 27 September, Danylo Radivilov, Deputy Director of the Institute for Eastern Studies of Ukraine’s Academy of Science, gave testimony as witness for the defence.  He was extremely critical of the assessment presented by Zaripov, who is from the Kazan Inter-Regional Centre for Expert Assessments.  According to lawyer Edem Semedlyaev, Radivilov pointed to a huge number of mistakes, stating that “the expert, who should know the names of religious figures; prophets; Islamic scholars, did not correct the mistakes, but reprinted them as written in the transcript. This demonstrates his level of religious expert knowledge”.

During the same hearing, the defence established that nobody has seen the original tapes of the conversations about religion, politics, courage, that the charges are based on.  The men’s lawyers questioned two experts who carried out a phonoscopic examination.  They confirmed that there were signs of interference on the tape.  When the defence tried to ascertain what could have caused this, they were told that it was because they had not been provided with the original equipment on which the recording was made.

The defence have ensured that all of this and more is openly stated in court, and that, for example, the independent religious scholar’s comments are added to the case material.  This is important from the point of view of international courts, etc., but is, unfortunately, most unlikely to have any impact on the outcome of this specific case.  These ‘trials’ at the Southern District Military Court in Rostov have been resulting in huge sentences against Crimeans who have committed no crime for several years despite the lack of any grounds.  The judges sit through from they cannot prohibit, while blocking the defence from asking questions that expose the lies told by the ‘secret witnesses’ that these trials hinge upon.

Russia was recently criticized in the UN Secretary General’s report on occupied Crimea for convictions based almost exclusively on anonymous testimony.  The UN Secretary General pointed out, among other things, that the court frequently rejects, or limits, questioning aimed at demonstrating the discrepancies in these anonymous individuals’ claims and, generally, takes the side of the prosecution.

All of Russia’s trials of Crimean Tatars and other Ukrainian Muslims on unproven involvement in the peaceful Hizb ut-Tahrir movement, which is legal in Ukraine are totally dependent on ‘secret witnesses’, whose testimony cannot be verified. Not one witness, appearing openly and under his or her own name, has ever testified against the men.  It was telling that, in July 2021, the prosecutor suddenly decided not to question two of the six ‘anonymous witnesses’ in two of these trials.  Even with the judges obstructing many questions, the men themselves and their lawyers had managed to expose many highly incriminating discrepancies in the alleged witnesses’ testimony.

One such discrepancy is particularly damning.  Russia’s ‘trials’ of 25 Crimean Tatar civic journalists and activists have been split up into five essentially identical clones.  There are no good grounds for this, and one of the reasons was almost certainly to deflect attention from trials evidently aimed at silencing and imprisoning men who reported on repression in occupied Crimea and helped the victims of persecution and their families.  Russia’s obvious targeting of civic activists and journalists in March 2019 was internationally condemned, with the men’s release demanded and Russia clearly accused of using fabricated ‘terrorism’ charges as a means of crushing the Crimean Tatar human rights movement and civic journalists.

All 25 civic journalists and/or activists are charged under Russia’s ‘terrorism’ legislation due to a highly secretive and unexplained ruling by Russia’s Supreme Court in 2003 declaring Hizb ut-Tahrir ‘terrorist’, despite no evidence of terrorist acts anywhere in the world.  Some are charged with ‘organizing a Hizb ut-Tahrir group’ under Article 205.5 § 1 of Russia’s criminal code, the others with involvement in such an alleged group (Article 205.5 § 2).  All 25 men have also been charged (under Article 278) with  “planning a violent seizure of power and change in Russia’s constitutional order”, something they must have wanted to do with the power of words, since no weapons, etc. were found.

Without any internationally recognized crime, men charged as ‘organizers’ are facing sentences of 18 – 20 years.  The sentences for so-called ‘involvement’ are also huge, but may be five or more years lower.  Remzi Bekirov; Rayim Aivazov; Farkhod Bazarov; Riza Izetov and Shaban Umerov are all charged under the more serious ‘organizer’ article. This, however, was not initially the case. Two of the 25 men were arrested later, including Aivazov.  He was seized and tortured into signing a ‘confession’ by FSB men as he was returning to Crimea from mainland Ukraine from 16-17 April 2019.

One of the ‘anonymous witness’, identified in the case as ‘Faritov’, was first ‘questioned’ before Aivazov’s arrest.  He then gave ‘testimony’ that corresponded with the FSB’s version as of late March 2019, and did not mention Aivazov at all.  It was after Aivazov first formally retracted his supposed confession, and with his lawyer, Maria Eismont as witness, that the civic activist was first warned that he would “in that case” get the harsher of the two charges.  This is exactly what happened in August 2020.

During his interrogation in June 2021, ‘Faritov’ totally changed his testimony.  In full accordance with the FSB’s adjusted indictment, he now claimed to remember that Aivazov, whom he had ‘forgotten’ in 2019, was one of the organizers.

Prosecutor Yevgeny Kolpikov, together with the three judges in this case Oleg Volkov (presiding); Vitaly Mamedov and Magomedbasir Shuyapov have, from the outset, abetted the FSB, both by concealing the torture used to extract ‘confessions’ from Aivazov and the mobile phone they stole, which would corroborate Aivazov’s story, and by refusing to discard a confession which the defendant has said was given under duress.  The very fact that anonymous witnesses are playing such a role in the case is a damning indictment both of the prosecutor and the judges, since no proof at all has ever been provided that these ‘witnesses’ would be in any danger were their identity to be revealed.

Since 2016, the FSB have been using ‘Hizb ut-Tahrir’ charges in occupied Crimea as a weapon of repression, especially against civic journalists and activists from the Crimean Solidarity civic initiative.   The arrests on 27 March 2019 were condemned by Human Rights Watch who stated that “the sweeping arrests in Crimea aim to portray politically active Crimean Tatars as terrorists as a way to silence them”.  All of the men were recognized almost immediately as political prisoners by the Memorial Human Rights Centre, and their release has been demanded by, among others, the European Parliament and US State Department.