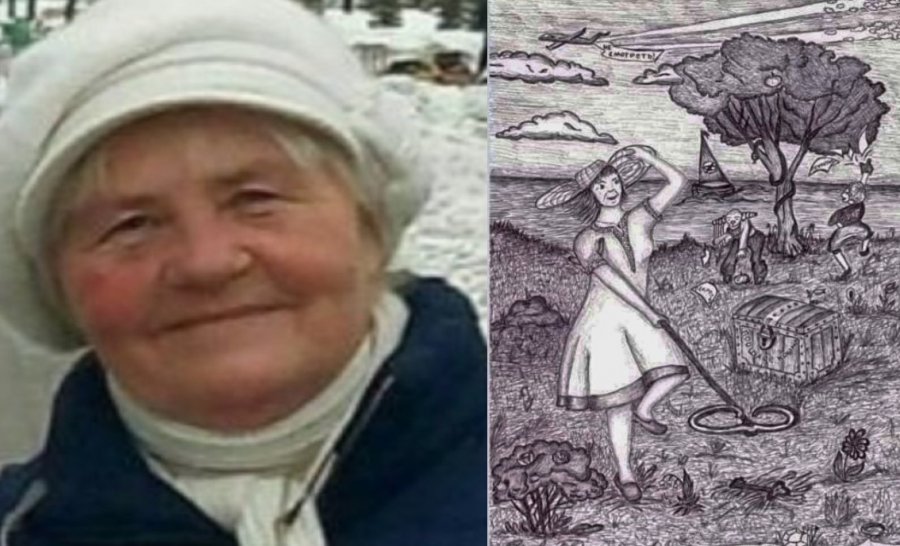 Halyna Dovhopola and her picture from prison which she sent, together with a letter, to Graty

Halyna Dovhopola has been able to pass a letter to Graty journalists in which the 66-year-old Crimean pensioner describes how she was seized by FSB officers in November 2019 and the torment she has since endured.  She is now imprisoned in Russia, serving a 12-year sentence on a charge of ‘state treason in the form of spying’ which is almost certainly linked primarily with her pro-Ukrainian views.

The FSB version is that Dovhopola, who was living in Sevastopol, worked for Ukraine’s Military Intelligence [HUR].  She is supposed to have gathered “information about a particularly aviation regiment of the Black Sea Fleet”.   The information in question allegedly pertained to call signs, frequencies, etc. of radio stations, etc., with this claimed to constitute a state secret.  There remain huge question marks over all of this, with no clarity as to how Dovhopola, who, in 2019, was 64, is supposed to have obtained this information, and why Ukraine’s Military Intelligence would have recruited a person to find it out.  Dovhopola was one of four people arrested over the first months after Russia’s last release of Ukrainian political prisoners, and is one of a very large number of Ukrainians whom Russia has claimed were working for Ukrainian Military Intelligence.  Such cases have virtually always involved the detainees being held incommunicado and obstructed from seeing independent lawyers.  The videoed ‘confessions’ men have given in such situations have generally been retracted, as given under torture, as soon as the person is finally given access to a lawyer.

Dovhopola only had the ‘lawyer’ provided by the investigators, and the four hearings that constituted her trial were behind closed doors.  On 24 March 2020 she was sentenced to 12 years’ imprisonment in a medium-security prison colony, with the sentence passed by ‘judge’ Igor Kozhevnikov from the Russian-controlled Sevastopol City Court.  It is likely that she denied the charges, and in an earlier letter, she spoke dismissively of the “show that goes by the name ‘appeal court’ having already taken place.  She has now been sent away from Crimea, to a prison colony in the Krasnodar region.

Graty succeeded in contacting Dovhopola and have published the picture and letter that she sent to them. In it, she recounts how the FSB detained her on 27 November 2019.  In typical FSB mode, a masked man jumped on her, as she came out of her gate that morning, seeing a friend off. She tried to shake the man off, asking why he was hanging on to her if she was standing calmly. He and the police car across the road were just the beginning, with several other vehicles suddenly appearing, and large numbers of people leaping out.  It is not clear why they saw such contingents as required, especially since the FSB were clearly aware of Dovhopola’s age, as an ambulance also turned up.

She did not in any way resist when they asked her to come with them. She tried repeatedly to find out why they were detaining her, but was given no answer.  They waved some paper around, but from a distance and she clearly could not read anything.

They took her to the FSB building in Sevastopol, where she says she began to feel as though everything was a blur.  She recalls that they asked her if she had been in Kyiv in 2019. “I answer: Yes, I was, my fourth granddaughter was born, and ask:  Have you ever been to Kyiv?”  He answers: “I’ll enter Kyiv in a tank!”  Everything went dark.  “And how many people, on one side and the other, will perish for you to enter Kyiv in a tank?”  Silence in response”.

She was handed a document with charges.  “I understand only that I’m a dangerous swine, that I’m a spy and sold Ukraine ‘secret information’.”  Her blood pressure was rising dangerously and at some point, an ambulance was called and she was given an injection and some tablets.

A ‘lawyer’ appointed for her appeared, however she does not recall when and it seems clear that the person did nothing to represent her interests. She was remanded in custody for two months and taken to a cell.  She recalls passing the same young woman who had been there videoing everything from the morning.  “I smiled and, in my handcuffs, showed three fingers – the symbol of the Ukrainian Trident.”

She was taken to Moscow, where she was imprisoned in the Lefortovo SIZO [remand prison].  Graty had clearly asked her if she had been subjected to psychological and physical pressure.  She answers affirmatively and goes on to describe the first interrogation where she also met a new appointed ‘lawyer’.  It was a woman this time, who asked her nothing, but began claiming that she was some kind of star who had achieved an acquittal for another Ukraine.  Dovhopola immediately suspected that this was about trying to extract money from her son and later wrote to him, stressing that she had not signed any agreement with any lawyer.

Having read the indictment, she says she was in shock and refused to sign it. They then threatened that if she didn’t, they would bring her daughter to Lefortovo from Kyiv, and that she would then sign.

It should be remembered that Halyna Pavlivna had been held incommunicado for many days, and scarcely given any food or drink.  She would not have been in any state to understand that the threat was probably empty. The ‘lawyer’ should certainly have reacted, yet said nothing.

“Later, over many nights, I dreamed that I could hear my daughter screaming, as though she were being ripped away from my infant granddaughter and that she was here in Lefortovo, writhing in hysterics”.

Dovhopola ended up signing whatever was put in front of her, with the ‘lawyer’ there merely to add her signature.  The woman did not explain, and Dovhopola did not know that she could cite Article 51 of Russia’s Constitution and refuse to answer any questions.  She says that the only thing she was pleased about was that her Ukrainian citizenship was acknowledged everywhere.

The ‘lawyer’ even refused to help her contact the Ukrainian embassy in Moscow.  She finally got the address from the SIZO, and wrote to the embassy – 10 months after her arrest.

She was held in a cell with a woman who was disturbed (or behaved as though she was), and would throw things at her and try to provoke a fight.  She pleaded for six months to be moved, to no avail, and it was only after she was finally able to see the public monitoring commission, that anything happened.

On 1 February 2021, Dovhopola was handed the indictment and 12 days later, on 13 February, in minus 20 conditions, she was taken in a metal van to Sheremetyevo to be taken to occupied Crimea for the ‘trial’.  She says that this must have been the worst 24 hours of her life. The plane was delayed by 10 hours, and she was held in a cage in the van, without food, water or medication.  At the other end, they created a farcical and cruel show, with a corridor of men with machine guns and dogs that she was forced to pass through.  By the time she reached the SIZO, it was 4 a.m. and  she had severe frostbite on the toes of both feet

As the last person in a cell with bunks, she got an upper bunk with no ladder.  The second night, she fell and hit her back very painfully on a sharp corner.  Nobody reacted to her plea to see a doctor, although she couldn’t bend at all for three days, and it was hard to breathe.

The worst, however, was still to come when she was transferred, by prisoner van, to a detention centre in Sevastopol.  On 24 March 2021, the day of the first verdict, she says, they tried to break the fingers of her right hand. She can’t say whether it was deliberate, or a coincidence, that this was on the last day of the first ‘trial’, but the convoy men were especially brutal “worse than the Gestapo”.  They hurled her into the vehicle, and then dragged her from it, using foul language. .  She says she laughed in their face: “12 years imprisonment!”

Dovhopola does not, unfortunately, explain why she says that the appointed lawyer lodged an appeal despite her objections.  Although the outcome was largely predetermined, it is still better to go through all procedure, if only to be able to then turn to the European Court of Human Rights.  She writes that during the period of quiet after the sentence, she began to “go on the war path for my rights. I began to allow myself to react rudely to the humiliation, and you know, it gave some possible results.  The only thing I fear is getting used to this for ever.”

There are a few cryptic points in the letter which are best not speculated about until Halyna Pavlivna is finally freed and able to see her children and grandchildren, and Ukraine.  She says that she mainly needs her medication and at least a little fruit and milk products. She does not want anybody to collect money for her, and stresses that what she and other political prisoners need is wide publicity and reminders to Ukraine’s government about their plight and the need to secure their release.

“We are waiting here, and each of us is fighting for our life, so as to not “die in Russia” behind barbed wire. We ask you all not to forget about us!  Glory to Ukraine!”

Please remember Halyna Dovhopola and return to this text, or type in her name on the site.  We will add an address in order to write to her as soon as this becomes known.