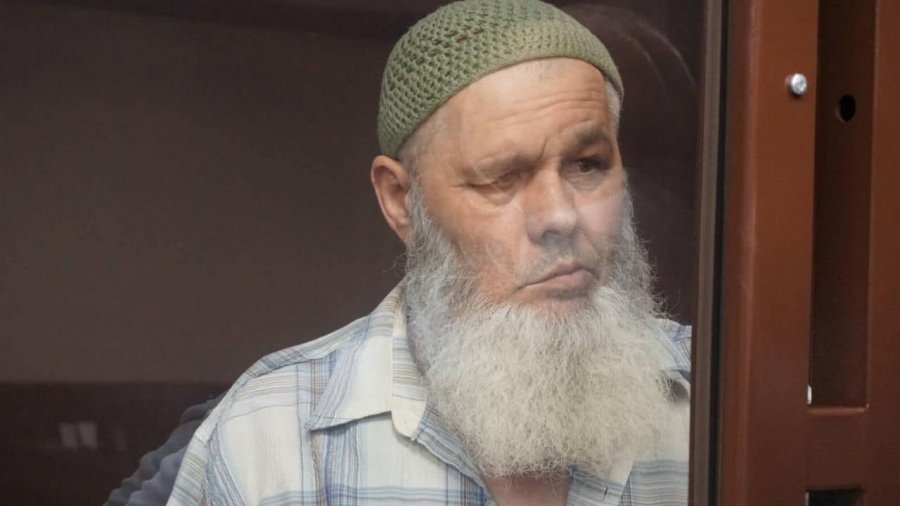 Despite a recent micro stroke and the real likelihood that Servet Gaziev will not live to the end of his internationally condemned trial, Russia is refusing to release the 61-year-old Crimean Tatar political prisoner.  He was, instead, placed at the beginning of September in the neuropsychological unit of a Penitentiary Service hospital for tuberculosis patients, in a cell together with men with mental disorders.  It was staff of this institution who took part in beating Gaziev and forcibly cutting off his beard.

Gaziev has explained to his lawyer that the problems began on 19 September, when he and the other men were dragged off ‘to vote’ in the parliamentary elections.  While the outcome of these heavily rigged elections was essentially predetermined, the authorities, like in Soviet times, needed a large turnout, and made use of all institutions where people could be forced to take part.

Gaziev refused to vote on the grounds that he is a Ukrainian citizen and for religious reasons.  That day he was taken out into a courtyard and subjected to foul abuse and denigration of his religious beliefs.

A few days later, four employees of this prison ‘hospital’ appeared in his cell.  They initially had a video camera working and demanded to know why he does not shave his beard. He explained that this was in connection with his Muslim beliefs. The employees then turned the video off, and forced Gaziev to the ground.  One of the men stood on his back and two others pinned his arms behind his back, while the fourth man cut his beard very short.

The 61-year-old who had long been in dangerously ill health, with this certainly contributing to the micro stroke, is now bruised and suffering pain in the back and to his right arm after his ordeal.  He informed the authorities of this, but there was no reaction at all and nothing was recorded.  Later that evening, they merely gave him yet another injection against pain.

Gaziev’s lawyer, Edem Semedlyaev has sent complaints to Russia’s Investigative Committee; to the prosecutor’s office and to the SIZO [remand prison] administration. He demands that both the prosecutor and the Investigative Committee carry out a check into the crime committed against Gaziev, as well as regarding the provision (or non-provision) of medical care.  He asks P.S. Lazarenko, head of the SIZO No. 5 in Rostov to send Gaziev for a proper medical examination in a civilian, not a prison, hospital, and for the results to be passed to both Gaziev and his lawyer.  Semedlyaev points out that in the institution where he should have been receiving medical treatment following his micro stroke, he was instead subjected to physical and psychological suffering at the hands of prison hospital staff.  A separate complaint has been filed with the prosecutor over the fact that Gaziev was placed in a tuberculosis hospital and in a cell with people who have mental disorders. Those responsible should be punished, he stresses, as should be those who used physical force against Gaziev,  and violently violated his right to practise his faith as he sees fit.

It is believed that Gaziev suffered a micro stroke on 28 June, however no action was taken by the SIZO administration.  Gaziev had been suffering acute pain and dangerously high blood pressure for many months, and there were also indications that he had contracted Covid-19.   As reported, on 9 July, veteran Russian human rights defender Lev Ponomaryov filed a formal demand for information about Gaziev’s state of health with both the Rostov Regional Penitentiary Service and the Prosecutor’s Office.  Crimean Solidarity has learned that Ponomaryov was told that information would not be provided about Gaziev’s health as this was confidential medical information.  It was, however, claimed that Gaziev’s state of health was “satisfactory” and that he did not require urgent medical care and hospitalization. Gaziev is in such a ‘satisfactory’ condition that virtually every court hearing has had to be adjourned after ambulances were called for Gaziev, as well, often, as for Dzhemil Gafarov, whose pre-dialysis kidney disease means that he should never have been held in detention.  Such adjournments are despite the fact that, before each hearing, the prison staff have pumped Gaziev full of painkillers, a practice that Gaziev’s sister, Svitlana Ablyamitova, a doctor by profession, says is extremely dangerous, especially since her brother has constantly complained of acute stomach pain.

One of the many ambulance doctors who has needed to be called earlier concluded that Gaziev was suffering from chronic cholecystitis - an inflammation of the gallbladder, causing abdominal pain, vomiting and possibly fever.  He clearly needs a proper medical examination in a civilian hospital, with the results acted upon, and not distorted in order to justify his continued detention.

All of those implicated in this shocking act of violence and religious discrimination, and in the ongoing jeopardy to Servet Gaziev’s life, are behaving in this manner with respect to a recognized political prisoner, whose release has been demanded by, among very many others, the European Parliament and US State Department.  Neither Gaziev and Gafarov, nor the other 23 Crimean Tatar journalists and civic activists arrested on 27 March 2019 or soon afterwards, are accused of any recognizable crime.  All of the men are accused solely of involvement in an organization which is legal in Ukraine.  Hizb ut-Tahrir  is a peaceful transnational Muslim organization which is not known to be involved in terrorism anywhere in the world, and the Supreme Court ruling in 2003 that declared it ‘terrorist’ has never been properly explained. There is no evidence that the men were actually involved in Hizb ut-Tahrir, but this is no problem for Russia’s ‘justice system’ which uses FSB-loyal ‘experts’ to find ‘proof’ of involvement in an innocuous word  or in conversations (from 2016!) about repression in Russia, about courage, etc, as well as ‘anonymous witnesses’ whose ‘testimony’ cannot in any way be verified.

Since 2016, the FSB have been using ‘Hizb ut-Tahrir’ charges in occupied Crimea as a weapon of repression, especially against civic journalists and activists from the Crimean Solidarity civic initiative. As Human Rights Watch pointed out shortly after the arrests on 27 March 2019, “the sweeping arrests in Crimea aim to portray politically active Crimean Tatars as terrorists as a way to silence them”.  The same point was made by the Memorial Human Rights Centre, which declared all of the men political prisoners.

The more letters they receive, the more Moscow will understand that their treatment of the men is under scrutiny. Please also write to politicians in your country, and ask them to help put pressure on Russia to release Gaziev, Gafarov and all those facing 15 – 20 year sentences for civic activism.

Letters need to be in Russian, and on ‘safe’ subjects.  If that is a problem, use the sample letter below (copying it by hand), perhaps adding a picture or photo. Do add a return address so that the men can answer.  The particular addressee’s name and year of birth need to be given.