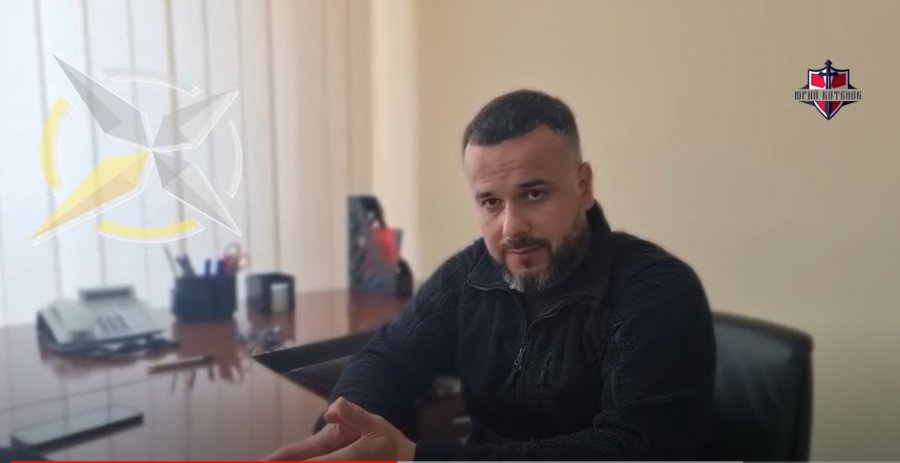 The ‘deputy information minister’ of Russia’s proxy ‘Donetsk people’s republic’ [‘DPR] has openly admitted that the Russian / Russian-armed militants constantly violate the Minsk Agreement and kill Ukrainian soldiers, they just don’t show that because of orders from above.

The message given by former fighter, now turned ‘first deputy minister of information’, Daniil Viktorovich Bezsonov is so radically different from that of his own usual propaganda that he presumably believed he was talking only to fellow militants.   Journalist Denis Kazansky has not, on this occasion, revealed how he came by the tape, but there seems no reason to doubt that it is Bezsonov who is making such incriminating revelations.

Before showing the video with Bezsonov, Kazansky points out the standard Russian and pro-Russian militant line, namely that the so-called ‘Luhansk and Donetsk people’s republics’ observe the ceasefire and the Minsk Accords, and never themselves open fire on Ukrainian soldiers, etc.  It is invariably the latter who are blamed for any escalation and who, they claim, violate all agreements.  Kazansky shows one example of such a ‘DPR’ propaganda line, though you need only go on any militant website, or the Russian state-controlled TASS or RIA Novosti, and you will find this a constant refrain.  In fact, you can look for Bezsonov himself, and find many interviews where he too repeats this line.

It is therefore worth hearing what the same Bezsonov can be heard saying on the tape Kazansky publishes.

“We have the following information policy: the enemy shoots at us and kills us; we die; we don’t shoot at anyone. We observe the Minsk Accords. International community, please put pressure on Ukraine so that it doesn’t kill us.  For many years that has been out position.”

Kazansky intervenes for a moment here, and certainly it is not clear whether Bezsonov’s next words follow on immediately, however it is the words that he can be heard saying that are so incriminating.

“We also destroy them, we also hit them efficiently, we even talk about this, but for the moment we don’t show it, because we are not allowed.  There is such a policy, someone, I don’t know, doesn’t want Ukrainians’ memory to be hit by images, some kind of heroes, fighters of the world perish at the hands of separatists, so that one day, when Ukraine becomes part of Russia, that they remember the images and have a negative attitude to us.”

Bezsonov is still careful to not say too much (except, of course, that the militants’ agenda has only ever been joining Russia, and not a breakaway ‘republic’).  He does not spell out who it is who calls the shots in the pseudo ‘republics’, since Moscow and those close to the Kremlin should not be openly named.  It is the role that the West is well aware that Russia is playing in Donbas which is surely the first and paramount reason why Moscow is eager to push the line that it is Ukraine which is breaching the Minsk Agreement, and not the militants it both arms and controls.

This was, it should be stressed, the position Russia took extremely aggressively from the beginning of the war in Donbas.  Russian state-controlled channels pushed the line that Ukraine’s Armed Forces were committing ‘genocide of the Russian-speaking population’, were guilty of war crimes, of horrific atrocities.  It was the level of disinformation in 2014 that made the EU finally understand (to some extent) that there is a great difference between defending the right to pluralism of views and defending a massive state-funded disinformation campaign.  While Russia removed at least one program claiming Ukraine to be carrying out ‘genocide’ before the UK media regulator could penalize them for it, the Russian state television fake about a three-year old child whom Ukrainian soldiers supposedly ‘crucified’ remains on the same site to this day.  Most of the disinformation is carried out in clear collaboration with the militants, as is the propaganda to which children in occupied Donbas are subjected.

See: Children taught Russian World propaganda and to view Ukraine as the enemy in occupied Donbas