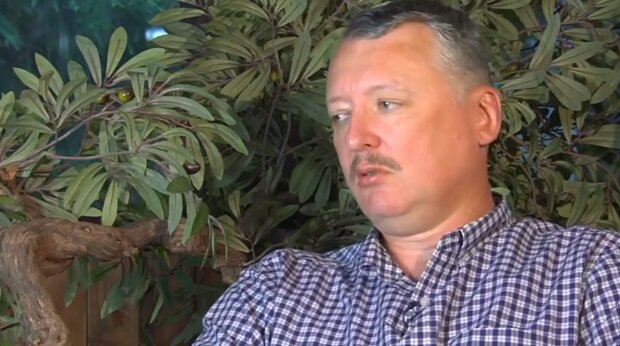 With modern Russia’s track record of ‘unexplained deaths’, it remains a mystery why ‘former’ FSB officer Igor Girkin is still alive.  Girkin undoubtedly served the regime of Russian President Vladimir Putin as required in 2014, first in helping Russia seize Crimea, then in bringing war and carnage to Donbas.  He was, however, removed from Donbas shortly after the downing by a Russian Buk missile of Malaysian airliner MH17, and is now one of three Russians, all ‘former’ FSB or Military Intelligence officers, and one Ukrainian, on trial in absentia in Holland over MH17.  Although he remains silent on certain subjects of particular danger to Moscow (in particular, regarding MH17 and Russia’s heavy military engagement in Donbas), he continues giving interview after interview in which he exposes not only his own war crimes, but those of his controllers in the Kremlin, and their lies about the conflict in Donbas being a ‘civil war’.

Back in November 2014, he told the far-right Russian Zavtra newspaper, that it was he who pressed the trigger that began the war and stated openly that “if our unit had not crossed the border, everything would have ended as it did in Kharkiv and in Odesa.”   This was confirmed, almost word for word, in January 2021 by one of the relatively few leading Ukrainian insurgents, Pavel Gubarev.

Ukraine has reason to be grateful to former Donetsk journalist Denis Kazansky who sacrifices so much of his time following and exposing both the lies and the incriminating truth told by Girkin and his ilk.  Kazansky has reported at least three interviews over the past 18 months where Girkin gave damning criticism of “the dump” or “black hole” that Donbas “has turned into”.  In July 2020 (on the anniversary of the Ukrainian Army’s liberation of Sloviansk, the first city that Girkin and his heavily armed men seized on 12 April 2014), Girkin called occupied Donbas “a dump”, saying the situation was worse there than in either Russia or in (government-controlled) Ukraine.  This, it should be noted, is precisely what Freedom House found in its 2020 report, although Girkin most certainly was not referring to the appalling human rights violations and lawlessness in the Russian proxy ‘Donetsk and Luhansk people’s republics’.  Kazansky points to Girkin’s specific turns of phrase.  “A dump has emerged” in Donbas, rather than he and the men whom Russia armed, paid and sent to Ukraine created this dump.   The mess, the impoverishment, etc. that is now seen in occupied Donbas have led, Girkin says, to hatred of Russia which he acknowledges “is justified”.

Kazansky interrupts here with a dig at all the Russians who claim or even genuinely believe that anti-Russian sentiments in Ukraine are inculcated by organizations funded by George Soros, ‘American propagandists’, ‘Ukrainian fascists’, etc.  Why should they be needed when Russia is so good at producing Russophobia, at setting even Ukrainians (like himself) who were once perfectly well-disposed to Russia and Russians against them?

Girkin made similar comments, this time, referring to “a black hole” in an interview reported in June 2021.  He has also, on numerous occasions, been scathing about the role of Vladislav Surkov, Putin’s advisor, who was, until early in 2020, widely understood to be responsible for overseeing and controlling Moscow’s efforts to inculcate ‘Russian world’ in Donbas.  To what degree Surkov has genuinely been removed, and why, can probably be disputed, however Girkin’s criticism of Surkov is of less interest than his statement in March 2020 that it is hard to distinguish Surkov’s liability from that of Putin since Surkov was Putin’s aide.  He effectively confirms that the orders came from Putin.  Although they are a ‘state secret’, you can see their results in Donbas as Surkov is leaving, at least four years too late.

On 1 October 2021, Kazansky posted excerpts from yet another incriminating interview given by Girkin.  In it, the latter addresses the difference in Putin’s and therefore Russia’s narrative over Crimea and Donbas.  It is just possible that this time Girkin has gone too far since he makes it quite clear that the only actual difference between Crimea and Donbas is that Russia’s invasion of Crimea resulted in Putin’s ‘victory’.  Although Putin still initially denied that the soldiers without insignia were Russian, a year later, he openly boasted of his role.  The situation in Donbas was quite different.  This time, Ukrainian volunteer battalions and the Ukrainian Armed Forces prevented Russia from sweeping through Donbas (and probably moving further).  This failure of Putin’s plans, Girkin claims, is the reason that Moscow’s line to this day is that Russia is not a part to the conflict.

In fact, that is almost certainly not the only reason.  The West’s reaction to Russia’s invasion of Crimea had already elicited all too many memories of the shameful 1938 Munich Appeasement to Nazi Germany. Failure to react and draw red lines over Russian advances into Eastern Ukraine would have been catastrophic.  One may wonder how unwavering the red lines would have been without the downing of MH17, but that can only be speculation.  The Kremlin now has particular reasons for trying, however pointlessly, to deny its pivotal role in the conflict.

Like fellow Russian ‘leader’ of the so-called Donetsk republic’ and now Russian MP, Alexander Borodai, Girkin remains a Russian chauvinist, convinced that Russia should seize far more of Ukraine.  The rest of the interview is, at one level, comical with Girkin asserting that, if Ukraine does not join Russia, then it awaits, oh horror, the same terrible fate as the Baltic States (trapped within the EU!).  Girkn waxes lyrical about the supposed ‘win-win’ situation if Ukraine ‘joins Russia’.  As Kazansky notes, these colonial fantasies come just months after Girkin last publicly acknowledged that the so-called ‘republics’ have become a dump, and their population impoverished.

Only the words are comical, however, not the killing, suffering and grave war crimes that the Kremlin and its henchmen brought to Ukraine.