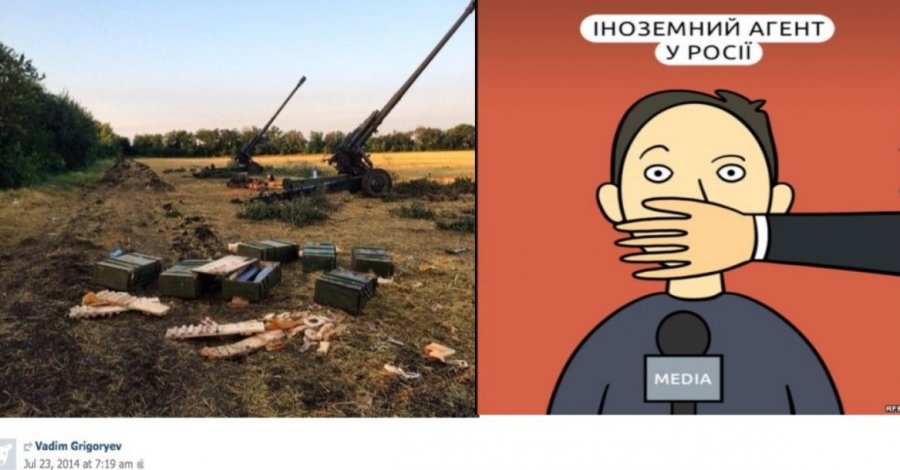 One of the incriminating social media posts (admitting to ’pounding Ukraine all night’) that Russia has already moved to prevent, Foreign agent in Russia Cartoon by ZhenyaO, Radio Svoboda.

Russia’s FSB has published a list of 60 topics that could result in journalists and others finding themselves labelled ‘foreign agents’ and prosecuted despite receiving no funding from abroad.  The list of information  “in the field of the Russian Federation’s  military and military-technical activities” does not constitute a state secret, but could, allegedly, be used against Russia’s security.  It includes the very widespread practice of hazing or other illegal activities in the army; military corruption and / or procurement; the deployment, numbers and arms of military forces, Russia’s National Guard, FSB and other bodies. Very many of the items (such as “information about the assessment and prognoses for development of the military-political, strategic (operational) situation”) are dangerously broad and imprecise making it easy to use them against any journalist, civic activist or lawyer, simply doing his or her job. Ivan Pavlov, a prominent human rights lawyer, who knows first-hand about political persecution in Russia, warns that this list is a new instrument for persecuting those who, in the subjective view of public officials, are not obtaining information for their own personal use, but for foreign sources.

The FSB list was first mentioned in an amendment significantly broadening the list of potential ‘foreign agents’ made to Russia’s notorious ‘Dima Yakovlev’ Law at the end of 2020.  It stated that where a Russian citizen or a foreign national was deliberately gathering information contained in the list, they must approach the Justice Ministry and declare themselves a ‘foreign agent’ or face criminal prosecution. Details about the list emerged in July 2021 and aroused huge concern, especially, although not exclusively, among journalists.

This new move is part of a wider crackdown on journalists, NGOs and those involved in them, and almost certainly has grave implications for occupied Crimea, as well as for Russia.  In July 2021, Team 29, an initiative which had, among other things, fought Russia’s blocking of access to archives and President Vladimir Putin’s illegal decree concealing information about military losses during so-called ‘special operations’ in peacetime was forced to end all of their activities.  At the end of April this year, Team 29’s Director, Ivan Pavlov was detained and presented with criminal charges pertaining solely to his work as a lawyer representing imprisoned journalist Ivan Safronov.  The latter was working as an advisor to the head of Roscosmos when arrested in July 2020 on charges of ‘treason’, with the charges condemned both within Russia and by international media organizations.

Pavlov recently moved to Georgia, from where he commented on the new FSB list for Radio Svoboda.  “You can be interested in whatever you like, but now the state has a weapon for persecution (including criminal prosecution) of those individuals who, in the view of the state are gathering this information not for their own internal use, but in the interests of a foreign source. The state can consider this to be the case without providing any explanation, simply citing ‘questions of security’. It will be very difficult, even in court, to obtain an explanation as to why they thought that the information was being gathered for a foreign source. <> The court will be guided solely by the opinion of the FSB.”

The new Article 330.1 of Russia’s criminal code enables the FSB to prosecute people in cases where “there are no signs of state treason” (under Article 275).  This is all extremely subjective and allows for arbitrary decisions, Pavlov says, with the main difference being in the fact that the new Article envisages a sentence of up to five years (much less than for what is termed state treason).  Journalists or others, could find themselves facing criminal prosecution if some official claims that they have gathered items from the FSB list without having registered themselves as ‘foreign agents’.  It is immaterial that they did not receive any money from any foreign source.

“As a lawyer, I was struck by the item that includes in the list information from the criminal investigation carried out by the FSB and military investigative bodies of the Investigative Committee. It transpires that it is not only journalists writing about such cases that end up in the high-risk zone, but also lawyers who are carrying out their professional activities by gathering information for this.”

Pavlov was not prepared to speculate as to what could have triggered this particular list, nor why there is so much concentration on the Russian space agency (Roskosmos).  There have certainly been a lot of military scandals over the last couple of years, including the linking of the individuals suspecting of the nerve gas attack in Salisbury, UK, with Russia’s Military Intelligence and revelations about huge-scale corruption in Roscosmos.  There is also, however, Russia’s ongoing aggression against Ukraine and this list is only the last of many measures, including the above-mentioned presidential decree and defence ministry bans on soldiers using social media, aimed at preventing Russia’s lies about the conflict in Ukraine, as well as downright war crimes, from being exposed.  In Russia’s proxy ‘Donetsk and Luhansk people’s republics’, a number of Ukrainians have been tortured and remain imprisoned for having reported Russian or Russian-controlled militant movements, military equipment, etc. on social media.  This new list means that Russians could face prosecution for revealing information about Russian military on the border with Ukraine, as well as in occupied Crimea.

What other forms of information about the movements of the National Guard, the FSB, etc. in occupied Crimea could get a person prosecuted for not declaring themselves a ‘foreign agent’ remains to be seen. In theory, this list could backfire against officials who could also be prosecuted for totally Kremlin-loyal publications.  Pavlov is, however, sceptical, and notes that “any legislation in our country is applied very selectively. As they say: “everything for friends; for the others – the law. This legislation has been created ‘for the others’.”