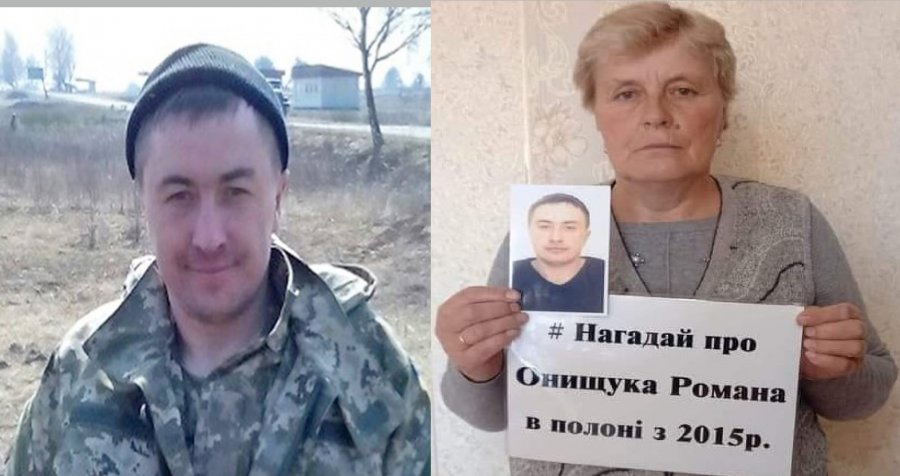 Roman Onishchuk, Halyna Onishchuk with a photo of her son and a plea to remember him

It is impossible to imagine the torment that Roman Onishchuk’s elderly mother has endured over the last six years since her son was seized by militants from the self-proclaimed and Russian-controlled ‘Luhansk people’s republic’ [LPR]. Twice she has learned that the militants have at least confirmed that they are holding him, only for that confirmation to be withdrawn. During the release of hostages in December 2017, she learned from one of the freed men that her son was alive, but nothing more has been heard.

Lyudmila Glondar knows a lot about anguished waiting as her brother Serhiy Glondar, and his special forces colleague, Oleksandr Korinkov, were seized in Russia’s Debaltseve treachery in February 2015 and only released in December 2019.  For over four years, she and other members of the men’s families, tried everything to ensure that the men were not forgotten and to secure their release.  One such attempt was a meeting with Viktor Medvedchuk, the controversial Ukrainian politician and friend of Russian President Vladimir Putin.  She says that somebody from the SBU [Ukraine’s Security Service] suggested that she ask Medvedchuk about Roman Onishchuk since the Donbas militants were refusing to confirm his name on the exchange list.  “I asked, and was told that Onishchuk is in Luhansk.  Then that evening I was called by Medvedchuk’s assistant who said that we had not understood each other properly”.  After the first major exchange of prisoners in December 2017, a member of the Contact Group involved in the Minsk negotiations stated on television that “Roman has been confirmed”. This was wonderful news, however, once again, after some time, the ‘LPR’ militants withdrew their confirmation.

“My last meeting with Pani Halya was in December 2019, at the airport (after the exchange). We were all crying from joy at meeting our loved ones.  She stood apart, and also quietly wept (on the one hand she was happy for all of us, but on the other, the pain, the not knowing about her own son, broke her mother’s heart. “

Roman had worked on the railways before being called up in 2014.  His home is only around 50 kilometres from the border with Poland, and he himself is part Polish.  In an interview to Monika Andruszewska on Belsat.eu, Halyna Onishchuk said that her son had dismissed any possibility of fleeing to Poland to escape mobilization, and had accepted that it was his duty to serve in the armed forces.

He was seized by Luhansk militants in broad daylight on 15 June 2015 while travelling by taxi to his military unit.  They let the taxi driver go and it was the latter who informed the police of the abduction.  They had been driving through the Borivske checkpoint, he said, around 35 kilometres from the frontline. An armed and masked man walked out in front of the car.  The taxi driver tried to turn the car around to get away, but the armed militant opened fire at them.  Then two men in camouflage gear came to the car and dragged Onishchuk away.  Ukraine’s Defence Ministry have said that Onishchuk was carrying out a military task, and it is possible that the official details are omitting something.  Under any circumstances, however, Onishchuk was seized as a serving Ukrainian soldier and should unequivocally have been treated as a prisoner of war.

Onishchuk was believed missing without trace until December 2017, however his mother was convinced that he was alive.  At some point during those two years she received a call from an unknown number.  A stranger asked if this was Roman’s mother and where his parents work and live.  She says that she understood that the person was calling from ‘LPR’ and pleaded with him to just tell her if her son was there. The person answered affirmatively, though gave no further information

Halyna Onishchuk explained to Belsat that she and her son are from a village with such mixed ancestry that nobody considers whether you are Polish or Ukrainian.  She says that as long as she can remember, they have always gone to both the Catholic church on religious holidays, and to the Ukrainian Greek-Catholic.

It remains unclear why the militants in ‘LPR’ are so secretive about Roman Onishchuk.  One suggestion is that the torture he was almost certainly subjected to has left too many traces.  Andruszewska spoke with other sources who even suggest that the militants could have cut off his finger or hand, although there is no way of confirming this.   Judging by some of the civilian hostages whom the militants have refused to add to the last two major exchanges (in December 2017 and 2019), it is also possible that the problem is what Roman can divulge, particularly about Russia’s military involvement.  That too, however, is also speculation, and the main task now is to increase pressure on Moscow to stop blocking the release, as per the Minsk Agreements, of other Ukrainian POWs and civilian hostages.

See also: POWs tortured for defending Ukraine in Donbas and for Russian propaganda