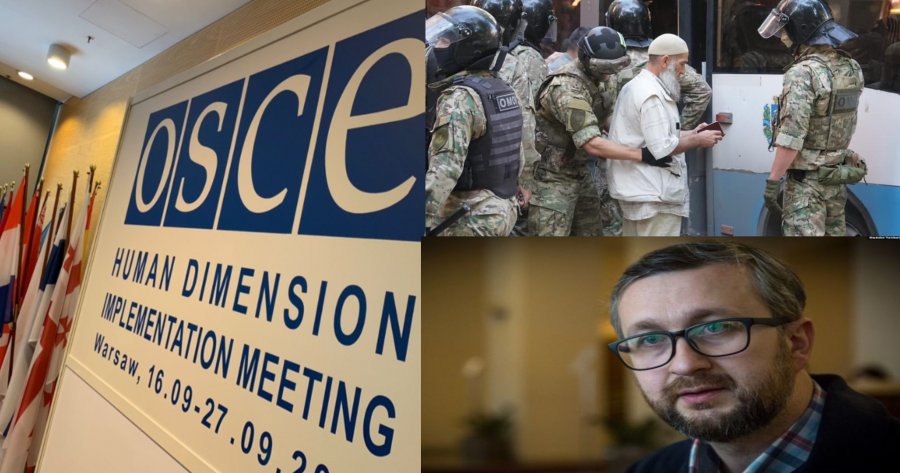 OSCE HDIM 2019, Upper right Mass arrests of relatives and others trying to find out where Crimean Tatar Mejlis leader Nariman Dzhelyal (below) and four other men had been taken

The traditional OSCE Human Dimension Implementation Meeting in Warsaw did not take place this year with the US Secretary of State Anthony Blinken laying the blame squarely on Russian obstruction.  While Russia has formally denied this, it does appear that a major sticking point was that Moscow was prevented from once again sending fake NGOs to push Russian disinformation about occupied Crimea.

Olha Skrypnik, Head of the Crimean Human Rights Group, explains that this normally annual conference is the only event where civic organizations from 57 countries are able to inform people about what is happening, either by speaking directly to the conference, or through side events.  “The results of the conference were taken into account in subsequent OSCE resolutions on this or that topic, or in later decisions. This could also have an impact on some kinds of structural decisions. Countries’ representatives returned to their capitals and in one way or another influenced the policies of specific countries.”

Skrypnik regrets that the conference was simply cancelled in 2020 due to the pandemic, rather than being held online.  She believes that Russia has deciding to make use of this, having understood “that it’s a lot easier without the conference. You don’t have to work on refuting facts; you don’t have to send delegates and maintain that propaganda machine.  You can simply speak out against holding [the conference] and that bureaucratic mechanism worked.  Russia made use of the vulnerability of the system and blocked the conference.”

On 14-15 October, there will, however, be a different event in Warsaw, entitled ‘Democracy, Human Rights and OSCE Security’ which she hopes will provide an alternative platform for speaking about human rights violations.

A Russian Foreign Ministry representative claimed that Blinken’s criticism was “another attempt to distort reality”.  Russia had “insisted on including an item on the need to counter neo-Nazism and the glorification of Nazism on the agenda because of the aggravation of these problems in the OSCE space.”   It also demanded what it called “the equal and non-discriminatory access of all participants, including NGOs”, and said that Sweden, as the current OSCE Chair, had blocked these demands.

Russia has a highly specific view of ‘neo-Nazism and the glorification of Nazism’, with such ‘discussions’ tending to be about presenting a very slanted and inaccurate view of Ukraine and the Baltic States.  Russia has, in fact, closely supported far-right, often neo-Nazi-leaning parties, in Italy; France; Hungary and other countries, as long as these parties become pro-Kremlin and support Russia’s actions, especially its occupation of Crimea and aggression against Ukraine.  It is no accident that Russia’s  ‘electoral’ stunts, such as the pseudo-referendums in Crimea and occupied Donbas in 2014 were predominantly ‘observed’ and effusively praised by members of far-right and neo-Nazi European parties (as well as those from the extreme left).  A neo-Nazi Russian nationalist recently gave details of how the then Deputy Prime Minister, Dmitry Rogozin, tried to get him to gather men to travel to Donbas and kill Ukrainians in 2014 and of the criminal prosecution he faced when he refused.  Details, including of other Russian neo-Nazis who went willingly, can be found here.

It seems likely, however, that the real sticking point was the second of Russia’s demands.  The Human Dimensions Implementation Meeting is a vital opportunity for NGOs like the Crimean Human Rights Group and many others to highlight real and escalating human rights violations in occupied Crimea and in the Russian proxy Donbas ‘republics.’  As the Chairman and other members of the US Helsinki Commisison noted in their joint statement, “Russia clearly fears criticism of its worsening human rights record and fraudulent elections from the OSCE, other OSCE participating States, and civil society.”

In 2019, Ukrainian delegates walked out of the session on 17 September in protest, after Russia used Crimean collaborators to push Russian propaganda about Crimea; Crimean Tatars and Ukraine, including the claim that Crimea ‘is Russian’.

One of the Ukrainian journalists present was Iryna Sedova from the Crimean Human Rights Group.  She wrote afterwards that “OSCE is tolerating the information legalization of the occupation of Crimea, by giving a platform to Russian agents brought from the peninsula. For three hours, a minimum of 11 GONGO [government-organized ‘NGO’s] and agents of the Russian Federation talked about how wonderful the situation with freedom is in the RF and Crimea, and how bad it is in Ukraine.  There were only four addresses about the destruction of freedom of speech in Crimea and RF. The information war is continuing, and Ukraine is definitely losing it”.

This was not the first such occasion.  Although Russia had resorted to subterfuge, by concealing the fact that ‘its delegates’ were in fact from occupied Crimea, the individuals involved were all known collaborators and there was frustration that the OSCE was failing to take proper measures to stop the event being hijacked.

Russia’s petulant demand for “the equal and non-discriminatory access of all participants” suggests that this time proper measures were taken. Equally firm action is now needed to ensure that Russia cannot simply block those OSCE events which it cannot flood with propaganda.