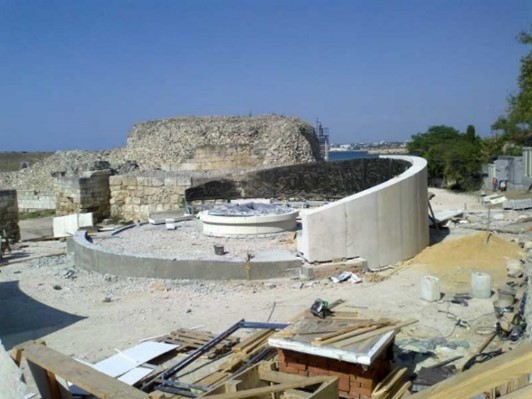 Russia’s illegal construction plans for the ancient ruins of Tauric Chersonese in occupied Crimea will cause enormous damage and are very likely to lead to Chersonese being removed from UNESCO’s World Heritage List.  Experts believe that Ukraine does have levers at its disposal and must use them before it is too late.

As reported, Russia has already caused considerable damage to Chersonese, with this in direct violation of international law and instructions from the UNESCO World Heritage Committee.  Back in 2016, the latter “urged all parties concerned with the state of conservation of [the Ancient City of Tauric Chersonese and its Chora] to refrain from any action that would cause damages to it and to fulfil their obligations under international law by taking all possible measures to protect it. “*

Russia is currently extending measures that will destroy Chersonese’s authenticity, while preventing UNESCO from directly monitoring the situation.  In its September 2021 report, the UN body’s Executive Board wrote that their request for a monitoring mission, which followed from the same 2016 decision, had received no response. Russia in general is refusing to allow international bodies to visit occupied Crimea unless they violate Ukrainian law and unequivocal UN resolutions by visiting it as though it were Russian territory.  UNESCO, therefore, cites other bodies that it is in contact with, such as the UN Office of the High Commissioner for Human Rights and OSCE, both of which provide reports about the situation in occupied Crimea. The information in its latest, hard-hitting, report was “provided by the National Commission of Ukraine for UNESCO and the Permanent Delegation of Ukraine on the request of the Director-General of UNESCO.”

The report mentions many areas of concern, regarding the reported destructive ‘restoration’ of the Khan’s Palace at Bakhchysarai; the demolition of Muslim burial grounds to build the Tavrida Highway and plans to build an ice skating rink on the site of an ancient Muslim cemetery; the fact that Crimean artifacts are being taken to the Russian Federation; and the “numerous unsanctioned archaeological excavations, whose findings are often unlawfully exported to Russia or end up on the black market.”’

Considerable attention is also given to what Russia is doing to the Ancient City of Tauric Chersonese and its Chora, and the uses being made of it for both propaganda and entertainment events. The report mentions that it was initially Russian President Vladimir Putin who, in March 2019, asked for a project to be developed for a so-called historical and archaeological park.  This was the beginning of what was presented in August 2021 (probably after the UNESCO report was submitted).

UNESCO added the Ancient City of Tauric Chersonese and its Chora to its World Heritage List in 2013.  At the time, it noted that “the property enjoys the highest level of national protection according to the Law of Ukraine on Cultural Heritage Protection” but warned of the dangers from expanding urban development and stressed that “clear budgetary priority needs to be given to conservation and visitor security rather than interpretation and other tourism projects.”  Since its invasion in 2014, Russia has been massively interfering in the site and adjoining territory which was suddenly claimed to be ‘Russian defence ministry property’.  Even the work carried out by archaeologists is illegal without crucial surveillance and consultation with UNESCO.

Russia has no ancient history or monuments of its own, which is one of the reasons why the current regime under Putin is so intent on denying Ukraine’s separate identity and is essentially plundering Ukrainian cultural heritage in occupied Crimea. Russia’s link with the peninsula only really begins with its first land-grab in 1783, but it has long and aggressively sought to push back the clocks by almost a thousand years.  Russian propaganda is full of claims about Chersonese being the “Russian Pompei” and “Russian Troy”.  Back in 2014, Putin spoke of “sacred Crimea”, and Russian propaganda is simply ignoring the grounds for disputing whether Volodymyr the Great was baptised in Chersonese or in Kyiv and the previously undisputed fact that the mass baptism marking the Christianization of Kyivan Rus in 988 took place in Kyiv.  This was recognized by the current Patriarch Kirill who, under Ukrainian President Viktor Yanukovych and, therefore, before Russia’s invasion, made a point of coming to Kyiv for the festival celebrating this baptism.

‘Russian world’ mythology finds that unacceptable, and it seems likely that the planned ‘museum of Crimea and Christianity’ will gloss over – or deny – such unpalatable facts.  One of the leading figures is, after all, Metropolitan Tikhon (Shevkunov), who is referred to as former KGB agent Putin’s ‘confessor’.  In 2019 he was reported to have written a play, presenting the current regime’s specific view of Crimean history, and was going on to write about Joseph Stalin. It was almost certain Tikhon’s play that Putin watched in August 2019 at Chersonese, with the event involving lights, special effects and inevitable damage to the ancient ruins.

In August 2021, plans were presented for a so-called ‘historical-archaeological park’ to be built on the territory of Tauric Chersonese by 2021. There were grandiose claims from Vladimir Medinsky, Putin aide and Head of the Russian Military History Society, about how people would supposedly visit from all over the world.  In fact, the main likely result of Russia’s need to appropriate Crimea’s past is that Chersonese will be stripped of its world heritage status. More than 23 hectares will be involved, supposedly adjacent to the ruins (and ‘handed over’ by the Russian defence ministry, with three hectares to be used for new buildings and structures.  Three museums are plan – of antiquity; ‘Crimea and Christianity’; and an archaeological centre.  There is also supposed to be an art school; a branch of the Artek children’s camp; a café and souvenir stalls.

According to Sevastopol journalist David Axelrod, the majority of local residents are against the plans.  That, however, is unlikely to change plans which were initiated by Putin, and which are important to Moscow’s propaganda narrative about Crimea.

Olena Serdiuk, Executive Director of the Ukrainian National Committee of the International Council on Monuments and Sites (ІCOMOЅ), notes that Russia had, in fact, carried out ‘expeditions’ to Chersonese long before its invasion, but that Kyiv had preferred not to notice.  “Now, however, the situation has taken on catastrophic proportions – this is effectively plundering.  Russia can only be influenced by international publicity; pressure; and court proceedings brought by Ukraine.”

She believes that, in order to draw attention to the situation in Chersonese and the Khan’s Palace at Bakhchysarai, Ukraine needs to take steps to have both sites placed on the list of world heritage in danger. Ukraine’s Ministry of Culture should carry out the necessary analytic work for this.  Serdiuk adds that UNESCO’s report has essentially given Ukraine the message that its representatives will work further to defend Crimea’s cultural heritage.  Its reports make it extremely clear also that nobody is disputing that this is Ukrainian territory over which Ukraine has jurisdiction.

Anatoly Tumanov worked earlier at the Tauric Chersonese museum complex and has long warned that the museum is no longer being run by scholars, but by “some kind of people with the words ‘Russian Foundation – my history’ on their backs”.  These individuals do whatever they please and clearly have no idea where they are.  Back in August 2019, he cited as an example of this the fact that they had propped metallic fencing against ancient walls (more details here).

Tumanov now points out the UNESCO did impose some conditions when declaring Tauric Chersonese on the World Heritage List, including the removal of any contemporary structures.  The yacht club, he says, was taken away, but the structures remained and have now been taken over by the same ‘My History’ Foundation. He mentions various new constructions from this foundation - a large hangar; a model of a helicopter and bronze installations about the history of Chersonese.  All of these, he says, bear the hallmarks of major structures which are even prohibited by law.

“This ancient city has now been disfigured by contemporary constructions and UNESCO has every reason to move Tauric Chersonese to its list of sites at risk.  What is more, during the preparatory work for the construction around Chersonese, there were extremely intensive excavations, with this beginning with the use of excavators and heavily construction technology.  All of this they dumped onto trucks and just took away.”

The soil taken away is placed behind a high barbed-wire fence preventing local specialists from examining it.  They have grounds for suspecting that things being dug up are of great historical importance, but if you dig with excavators, nothing will be preserved.

Tumanov notes that the archaeological excavations, carried out in 2021 by the Hermitage and Institute of Archaeology found a lot that was of interest and said that there was a lot of area worth investigating.

“Now on territory which has not been examined, they have planned a huge number of constructions and this is absolutely wrong. I doubt that they would change their plays if they find something interesting.  UNESCO did not say that the monument could be turned into a platform for mass cultural events.  You cannot build anything there.”.

The Russian occupier are plundering Ukraine’s cultural heritage and are causing damage that may soon be irreparable.