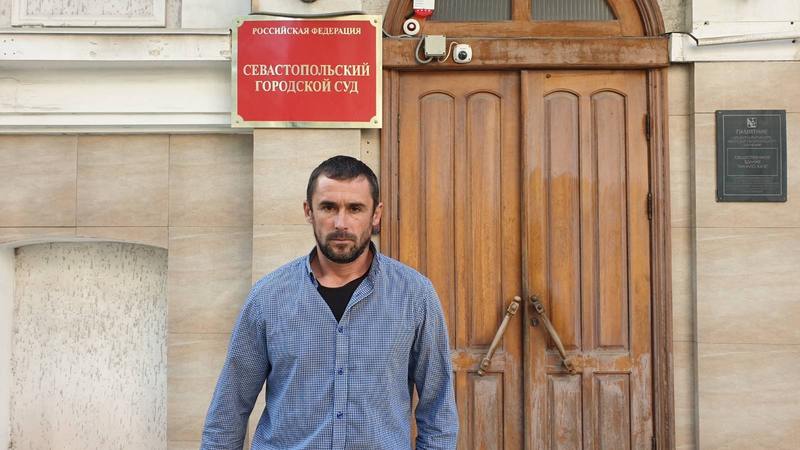 Ruslan Bekirov outside the ’court’ in Sevastopol Photo Crimean Solidarity

Russia certainly gives ‘Federal Security Service’ [FSB] officers an easy life in occupied Crimea.  As long as they provide enough Ukrainian ‘spies’, ‘saboteurs’ and ‘terrorisms’, no questions get asked about the methods used to obtain the false testimony and / or ‘confessions’ on which such cases hinge.  And when something ‘goes wrong’, and a victim finds the courage to stand up in court and retract his testimony, the FSB are free to teach him – and others – a chilling lesson.

This is what happened to Ruslan Bekirov who ended up convicted of giving ‘false testimony’ when he spoke out about the torture. He refused to be cowered and, with the help of lawyer Emil Kurbedinov, he has persisted in demanding that the torture is investigated.  He may need to seek justice at the European Court of Human Rights, unfortunately, since the FSB clearly have a free hand in occupied Crimea.

The Military Investigative Committee has refused to examine Bekirov’s complaint against the actions of the FSB.  It cites Russia’s law on citizens’ appeals and says that a complaint about torture should be directed to a civil court.  This is evident nonsense since even Russia officially acknowledges that torture by the FSB constitutes a criminal offence.

Kurbedinov told Crimean Solidarity that they had first appealed to the Balaclava City ‘Court’ against this entirely inappropriate response from the Investigative Committee to their complaint over FSB torture.  When that body refused to accept the complaint, they approached the Sevastopol City ‘Court’ which, on 12 October, took all of five minutes, from 14.00 to 14.05, to refuse to consider their application. Kurbedinov doubts that they could have even had time to read the application and says that “this shows how biased the courts are to cases which raise the question of FSB officers breaking the law.”  This bias, he stresses, was with respect to a man who had faced pressure and then been prosecuted for supposed false testimony and placed in a defendant’s ‘cage’ although he had had witness status in the original case (where he retracted his testimony).

In March 2019, Ruslan Bekirov was interrogated by the FSB who wanted him to testify against Enver Seitosmanov, a Crimean Tatar political prisoner who had been arrested in May 2018.  Bekirov was released once he agreed to ‘testify’, however in court on 21 August 2019, he not only refused to confirm the written testimony given earlier but described how it had been forced out of him, and also lodged a formal complaint.

Both in court on 21 August 2019 and in his statement to the Investigative Committee’s Central Military Department, Bekirov explained that “Andreyev printed some document and demanded that I sign it.  I read it – the document asserted that I was testifying that Enver Seitosmanov is a member of Hizb ut-Tahrir.  I refused to sign the document. After that, Andreyev and another FSB employee, introduced as Fyodor, began threatening that if I didn’t sign, they would imprison me for ten years. That I would never see my parents again. That I would be imprisoned with infected prisoners, including those suffering from tuberculosis, that I would be sent to serve a sentence far from my home and my parents, that I would rot in prison, that they would fine me two hundred thousand roubles.  All of this was accompanied by pressing demands that I sign the document testifying against Seitosmanov.”

Andreyev demanded also that he sign another document with false testimony against other Crimean Tatar political prisoners from Sevastopol.  He gave him a list of questions which he would be asked in court.  Bekirov was released after many hours and only after he agreed to sign the documents.

The formal complaint over the methods used was lodged soon after that court hearing, and on 16 October 2019, Kurbedinov announced that he had received a response to this complaint from the Military Investigative Committee acknowledging “indications of a crime” in the actions of the FSB officers.  That flicker of lawfulness proved extremely fleeting.

Instead, on 11 June 2020, the FSB turned up at Bekirov’s home, carried out a search and then took him to the FSB offices in Sevastopol where he was held for many hours.  Bekirov was charged with having lied in court, with the FSB using a ‘secret witness’, whose testimony could not be verified, as the alleged proof of this charge. On 21 January 2021, Kurbedinov asked that this anonymous ‘witness’ be identified.  He pointed out that the individual’s written statement had been obtained by the FSB who had behaved illegally during their detention of his client.  “Neither the court, nor I, nor the prosecutor know whether this person existed, whether he was questioned or whether he signed such a protocol (i.e. the supposed testimony) and what has happened to this person if he existed.”

This was a very strong argument and ‘judge’ Igor Goncharov from the Nakhimovsky District Court in Sevastopol did initially order that the FSB be asked for information about where the ‘secret witness’ was, whether he was under state guard; and whether the FSB had proof that he had faced any kind of threat from the accused.

On 15 February 2021, Goncharov convicted Bekirov of giving false testimony.  The 300-hour community work sentence was less that that demanded by the prosecutor, but it is next to impossible to believe that Goncharov was not aware that Bekirov had told the truth in court and that the FSB prosecution was pure fabrication in revenge for the 35-year’s old courage and integrity.

The 33-year-old recognized political prisoner was sentenced to 17 years’ maximum security imprisonment on 5 December 2019, with that sentence upheld on 16 April 2020.   He had not been charged with any recognizable crime and the ‘evidence’ which was supposed to prove his ‘involvement’ in a peaceful organization did nothing of the kind.