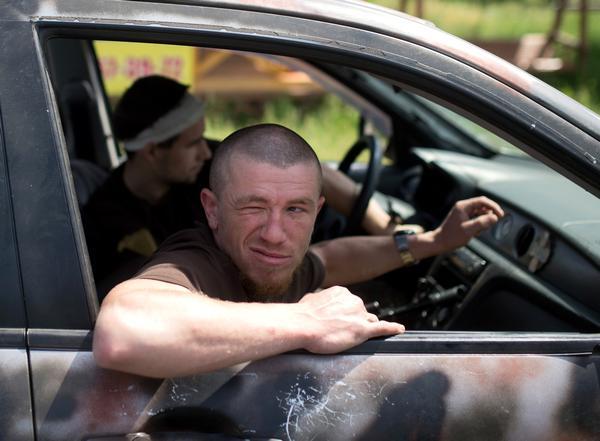 Russia has named a border patrol boat after Russian warlord Arsen Pavlov in the latest move to glorify a mercenary who boasted of committing war crimes in Donbas. The name of a Russian who arrived in Ukraine to kill Ukrainians and violate Ukraine’s territorial integrity will thus adorn a boat on the Don River patrolling foreign boats crossing Russia’s border.

Pavlov, generally referred to by his nom de guerre ‘Motorola’, was killed on 16 October 2016,  when a bomb exploded in the entrance to his heavily-guarded apartment block.  Although a video was posted, then soon deleted, in which the Ukrainian far-right ‘Misanthropic Division’ claimed to have killed Motorola and the Russian-controlled ‘Donetsk people’s republic’ [DPR] and Russian state media invariably blame the death on Ukrainians, his was one of many violent deaths of Donbas militants which many have seen as either internal conflicts or attempts to purge some of the more criminal elements among the militants. Certainly, some of the militants themselves, like Russian neo-Nazi Alexei Milchakov left after the leaders of his umbrella illegal armed formation were killed – in a power struggle or purge of criminals, depending who is describing them.

Ukraine, in fact, had every reason to try to catch Motorola, and murderous thugs like him, and put them on trial.  This is not only because of their individual crimes, but because the very many Russians among them expose the lies behind Russia’s narrative about a supposed ‘civil war’ in Ukraine.

Pavlov, born in 1983, had spent four years in Russia’s army, reportedly the marine infantry, and was involved in the second war in Chechnya.  In civilian life, he held very menial, unskilled jobs, and was reportedly in conflict with the Rostov police at one stage. Russia’s line is invariably that the Russians in Donbas all went there, as Putin claimed, at “the call of their heart”, however Pavlov-Motorola played a suspiciously active role in different aspects of Russia’s aggression against Ukraine in 2014, making it very hard to believe that he was not sent to Ukraine.  He is reported to have taken part in Russia’s annexation of Crimea and was also involved in the unsuccessful attempt in March 2014 to stage a ‘people’s uprising’ in Kharkiv and probably create another Russian proxy ‘republic’ in that oblast.  In the Donetsk oblast, he fought as commander of the so-called ‘Sparta battalion’ with he and his illegal armed unit taking part in the Battle of Ilovaisk and in the struggle for control of Donetsk Airport.

The war crimes charges that Ukraine would have wanted to bring against Pavlov-Motorola pertain to his killing in cold blood of at least one Ukrainian prisoner of war, Ihor Branovytsky.  Yury Sova was one of the Ukrainian soldiers who survived.  He has explained how both he and Ihor Branovytsky were among 12 men who had remained at what remained of the airport to care for four injured comrades.  They had no ammunition left, and surrendered on 21 January 2015, asking the militants to take the injured to hospital.  The men were ‘trophies’ for the militants who wasted no time in posting a video to boast of the men’s capture.  The video showed the men alive and without any signs of beating, including  Branovytsky, who could be easily identified as he was wearing a blue jacket, while the other prisoners were all in camouflage.

It is likely that Branovytsky was tortured by militant commander Mykhailo Tolstykh [Givi], two Chechens known as Tanchik and Stalin, and a woman called Vika.  Sova says that after such treatment from Givi and his people, the captured soldiers were taken to the basement where Alexander Zakharchenko, ‘DPR leader’. spoke to them and then handed them over to Motorola.

They were taken for interrogation, Sova recounts, and says that for six or seven hours they were first beaten, then ‘interrogated’.  He says that the militants’ questions made it clear that there were Russians among them.  Branovytsky protected the other men by saying that he had been the machine gunner, with this meaning that he got particularly brutal treatment.

The militants apparently claimed that Pavlov-Motorola had been ‘showing mercy’, with Motorola himself having said: “Don’t be surprised that I’m so nice, I can shoot any of you dead”

A Kyiv Post journalist had spoken earlier with Motorola on the phone.  The Russian refused to comment on Branovytsky’s murder saying: “I don’t give a shit about any accusations, believe it or not ” Motorola said. “I’ve shot 15 prisoners. I don’t give a shit. No comment. I kill whoever I want.”

There is simply no possibility that those in Moscow in charge of the so-called ‘republics’ are not aware of such substantiated charges of war crimes. This has not prevented Putin’s Aide Vladislav Surkov from taking part, a year after Motorola’s death,  in the unveiling of a monument to him and other militants who died in Donbas.  The memorial in Ostrovsky Park in Rostov (Russia) is entitled ‘To the Heroes of Donbas’.

In October 2020, Ukrainian journalist Denis Kazansky posted excerpts from an interview given by Igor Girkin (‘Strelkov’), the ‘former’ Russian FSB officer who took part in Russia’s annexation of Crimea and then brought war to Donbas.  In it, Girkin clearly suggests that the order to kill Motorola came from Moscow, and specifically the same Vladislav Surkov who a year later unveiled a monument to him. Girkin can be seen and heard saying that he cannot say anything about Ukrainian saboteurs being involved in Motorola’s killing.  What he can say, however, with certainty is that “our people” were involved.  He notes that Surkov was at that time in charge of what he calls “the Ukrainian line”, and that the killing “100% did not happen without him.  He asserts that the guards were removed a day earlier, and that some supposed lift maintenance people had arrived soon afterwards.  It was there that the bomb went off. Girkin adds that the same applies to the  killings of others, including  ‘field commander’ Alexei Mozgovy in 2015.  The latter is also treated as a ‘hero of Donbas’ although he is known to have deceived his fighters into ambushing and killing a family in order to steal the money they were carrying.

These are the individuals whom Russia wants its own population and Ukrainians in Donbas to ‘honour’ and emulate.