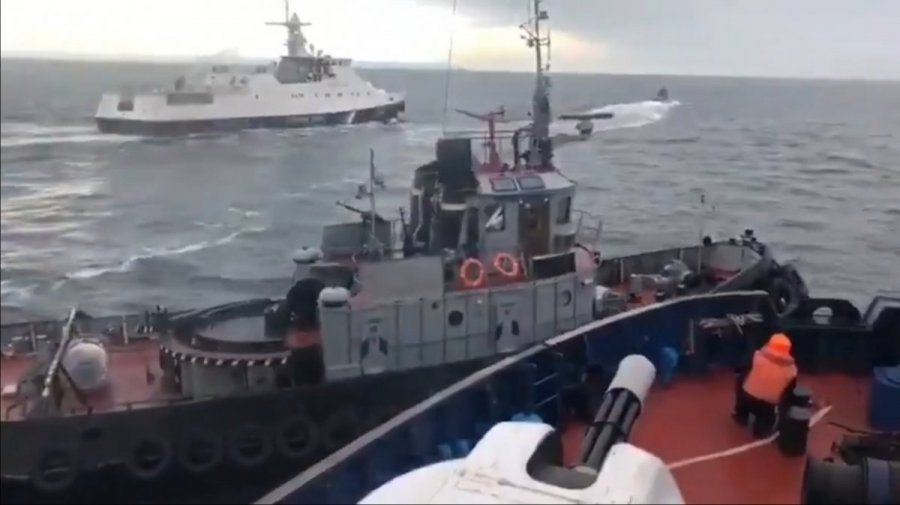 Hearings have taken place at the Permanent Court of Arbitration in The Hague over the seizure by Russia of three Ukrainian naval vessels and 24 crew members on 25 November 2018.  As in all the international court proceedings brought by Ukraine against Russia since 2014, the Russian Federation first tries to deny the specific court’s jurisdiction, and the oral hearings scheduled from 11-16 October 2021 focused solely on Russia’s attempt to get the case thrown out.  It is, of course, for the Court to decide, however this is not the first time that Russia has argued that the UN’s Tribunal for the Law of the Sea [ITLOS] has no jurisdiction, with the Tribunal presumably disagreeing since it agreed on 25 May 2019 to impose provisional measures. The fact that Russia flouted the Tribunal’s order that it release the naval seamen and vessels immediately is, unfortunately, nothing new, but does not change the fact that the only dissenting voice was that of the judge from Russia.   International court proceedings are always very drawn-out, and Russia’s disputes about jurisdiction, applications (in the trial over MH17) for ‘alternative theories’ to be examined, etc. all slow things down even further, with this probably the intention.

Since Russia was holding all 24 Ukrainian seamen prisoner, Ukraine acted swiftly and initiated compulsory arbitration in accordance with the UN’s Convention on the Law of the Sea [UNCLOS].  On 16 April 2019, it appealed to ITLOS to apply provisional measures (under Article 290 § 5 of UNCLOS) against the Russian Federation to ensure the release of the  three Ukrainian naval vessels and twenty-four crew members.  After hearings on 10 and 11 May, ITLOS issued its decision on 25 May 2019, allowing all Ukraine’s requests except the demand that Russia withdraw the criminal charges (of ‘violating Russia’s border’) laid against the 24 seamen who were being held prisoner at the Lefortovo SIZO [remand prison] in Moscow.  Just as it had done when the Netherlands took it to ITLOS over its seizure of Greenpeace’s ‘Arctic Sunrise’, Russia refused to even attend those earlier hearings.

It has now dropped that refusal, and both provided its ‘Preliminary Objections’ in advance and presented them at the arbitrary court on 11 October.  Russia’s chief claim seems to be that articulated in Item 3, namely that “the dispute concerns military activities and is therefore excluded from the Tribunal’s jurisdiction: both Russia and Ukraine have made declarations pursuant to Article 298(1)(b) of the United Nations Convention on the Law of the Sea (“UNCLOS”) expressly excluding “disputes concerning military activities.”  In its ‘Written Observations’ in response to these ‘objections’, Ukraine dismisses Russia’s assertion that the dispute had anything to do with military activities.

On 25 November 2019, Russian border guards under the FSB shot at and captured three Ukrainian navy vessels attempting to pass through the Kerch Strait, between the Black Sea and the Sea of Azov.  All 24 crew members were taken prisoner.

Before the arbitration court, the Russian side claimed that Ukrainian naval vessels had tried to “cross Russian territorial waters” and that this was “against a background of Ukrainian provocative actions and expansion of its military contingent in the region in an attempt to dispute the sovereignty of Russia in Crimea and the status of the Kerch Strait as Russian internal waters”.

Ukraine stated from the outset, and has reiterated before the arbitration court, that Russia violated the principle as set out in the UN Convention on the Law of the Sea that “warships and other non-commercial government vessels have complete immunity from the jurisdiction of any State other than their own.”

The three vessels – the Berdyansk, the Nikopol, and the Yani Kapu were, in fact, trying to return to their home port of Odesa, after Russia had blocked their transit via the Kerch Strait, when they were pursued by Russian coast guards who demanded that they stop, claiming that they had violated Russian law.  The three vessels continued their path at which point shots were fired on at least one of the vessels, and all 24 crew members were taken prisoner.  Despite the ITLOS order for their release, the men were held prisoner for over nine months, with Russia bringing criminal prosecutions against them in a civilian, not a military court. The vessels were held for nearly a year, with Russia asserting that these were ‘evidence’ in the criminal prosecutions.  The men were finally released, together with nine political prisoners, on 7 September 2019, mostly in exchange for Vladimir Tsemakh, the Ukrainian MH17 witness (and possibly suspect) whom Russia was trying to keep away from the Dutch Prosecutors and the Joint Investigative Team investigating the downing by a Russian Buk missile by Russian or Russian-controlled militants of the Malaysian airliner MH17. Russia did not terminate the criminal proceedings against the men.

There were, in fact, grounds for viewing the men to be prisoners of war under the Third Geneva Convention.  This is exactly what the Office of the UN High Commissioner for Human Rights stated in its first quarterly report after Russia’s attack.  It wrote there that Russia was in breach of international humanitarian law and that the 24 Ukrainians were prisoners of war.

Ukraine has not focused on this since UNCLOS applies strictly to peacetime. While very many international commentators referred to Russia’s actions as an act of war, there was no official state of war between the countries. Russia was left in a no-win position.  In trying to reject ITLOS’ jurisdiction, it would effectively have had to admit its act of military aggression. Recognition by any international court that there is a military conflict between Ukraine and Russia could result in Russia losing its right of veto at the UN Security Council, at least with respect to any votes on the situation in Ukraine.