400 Ukrainians imprisoned without a crime in Russia, occupied Crimea and Donbas 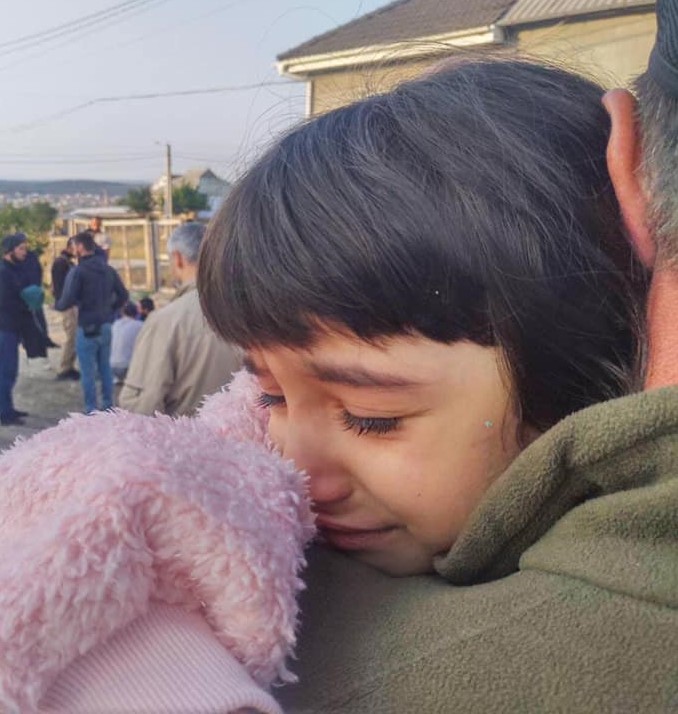 Around 200 children are growing up without their imprisoned fathers just in occupied Crimea. Photo of Rayif Fevziyev’s 5-year-old daughter, after her father was arrested on 17 August 2021 Photo Crimean Solidarity

It is not just 400 Ukrainian political prisoners, hostages and prisoners of war  who are held in captivity in Russia, occupied Crimea or Donbas, but also, effectively, the members of their families. This was the message to Ukrainian legislators on 19 October from Petro Vyhivsky, whose son, Valentin Vyhivsky, has been imprisoned in Russia since his abduction from occupied Crimea in September 2014.  For the relatives of men and women held prisoner, trying to resolve their problems becomes a major part of their everyday life, and one that is hugely expensive.  At present, he explained, the Ukrainian authorities do take some part in this, but the assistance is not systematic and often depends on public officials on a personal basis.

Petro Vyhivsky was speaking at a briefing given in the Verkhovna Rada by relatives of those held prisoner; human rights activists and some parliamentarians.  The circumstances are, in principle, promising, since Ukraine’s President Volodymyr Zelensky recently tabled three important bills on regulating the situation for those imprisoned and their families, and registered all of them as urgent.  Bitter experience has, however, shown that even the most hopeful initiative can end up filed away somewhere, gathering dust, and the briefing was to draw legislators’ attention to the bills and spell out their importance.

There are multiple issues that those imprisoned and / or their families have to grapple with all the time.  The conditions in prisons in Russia, occupied Crimea and Donbas are appalling, and the only chance that the men and women have of receiving vital medicines, as well as edible food, etc. is in parcels from their families, as well, in Crimea, as from members of the Crimean Tatar community.  This involves expense, but also a massive amount of time and effort, since the SIZO [remand prisons] or prison colonies will find any pretext to not accept such parcels.  Tetiana Matiushenko, whose husband Valery has been a hostage in the so-called ‘Donetsk people’s republic’ [DPR] since 2017, says that relatives have also needed to organize major work to the men’s barrack to make it inhabitable and pay for firewood or coal.  Probably the majority of political prisoners in occupied Crimea were the breadwinners of the family, and many have several children. Money is also needed for lawyers’ fees, for medicine, etc., and there are also a huge number of practical issues, like work record for pension purposes, etc. to be resolved.  While hostages and political prisoners are welcomed back at the highest level, and do have a short period of rehabilitation, most feel that they have been abandoned after that.  There are obstacles at each level since those released are unable to return to occupied territory to collect documents, and effectively need to rebuild their lives from scratch.  In a very large number of cases, the former prisoners have been subjected to prolonged torture and may well have physical health issues after their ordeal.

President Zelensky tabled three bills on 27 September 2021, with the most important of these No. 6104 ‘On the social and legal protection of persons deprived of their liberty as a result of the armed aggression against Ukraine, as well as members of their families’.   The other two are numbered 6105 and 6106.

In a statement timed to coincide with the 19 October briefing, prominent Ukrainian human rights NGOs expressed the hope that, after almost eight years of armed aggression against Ukraine and occupation of its territory, these draft laws can finally determine at legislative level who should be deemed a person who has been deprived of their liberty as a result of the conflict, and what additional benefits and guarantees Kremlin hostages and their families can expect.

As reported, providing clear criteria for such definition has proven to be a stumbling block with earlier legislative initiatives.  No. 6104 provides fairly detailed definition of the categories involved, with these including: military personnel taken prisoner by the aggressor state or its bodies while defending Ukraine; civilian hostages and political prisoners.  While the sphere of force of the law, as per Article 2 of No. 6104 does not specifically mention religious persecution, this presumably falls under imprisonment of civilians.

The bill also envisages the creation of a special Commission for issues linked with establishing whether people have been stripped of their liberty through the armed conflict.

In their statement, the NGOs note that the Ukrainian authorities had earlier provided those imprisoned and their families with some assistance via government mechanisms.  These, however, were not guaranteed by law and a systematic approach to such support was never created.   The bill now in parliament would establish entitlement by Kremlin hostages and members of their families of annual payment while they are imprisoned. It further envisages a one-off amount of aid should the person die or be killed while imprisoned or should they die in the year following their release.  There will also be a one-off payment after a person is released.

The bill also envisages a guarantee of legal defence and compensation for legal assistance; guarantee of free secondary legal assistance both while imprisoned and following release; medical and psychological assistance and rehabilitation, etc. after release.  Very importantly, it covers such areas as housing (providing temporary accommodation); employment rights; the right to education and professional training, etc. following a person’s release, as well as, for example, rebates in organizing internal or external passports, etc.

“As of 1 October 2021, 321 people who were freed between 2014 and 2019 have been recognized as having been deprived of their liberty as a result of the armed aggression against Ukraine. In addition, according to human rights groups’ data, at least 120 Ukrainian political prisoners are still deprived of their liberty or face restricted liberty on the territory of the Russian Federation or occupied Crimea, as well as at least 270 military and civilian hostages on the territory of the so-called ‘DPR’ and ‘LPR’.  All these people need state support and protection.”

The human rights groups, together with both the families of the Kremlin’s hostages and former prisoners and hostages now freed, urge Ukraine’s legislators to give the bills their consideration as soon as possible.  Concern for those who have been deprived of their liberty as a result of Russia’s aggression against Ukraine must stop being constantly put on hold.

A list of political prisoners held in occupied Crimea and Russia can be found here.

It is, unfortunately, already out of date since Russia’s revenge for the important Crimea Platform which helped draw up these bills was the arrest of Crimean Tatar Mejlis leader and journalist Nariman Dzhelyal, together with two cousins Asan and Aziz Akhtemov. (details here)

Ukrainians tortured and imprisoned in Donbas for supporting Ukraine, with Russia blocking their release