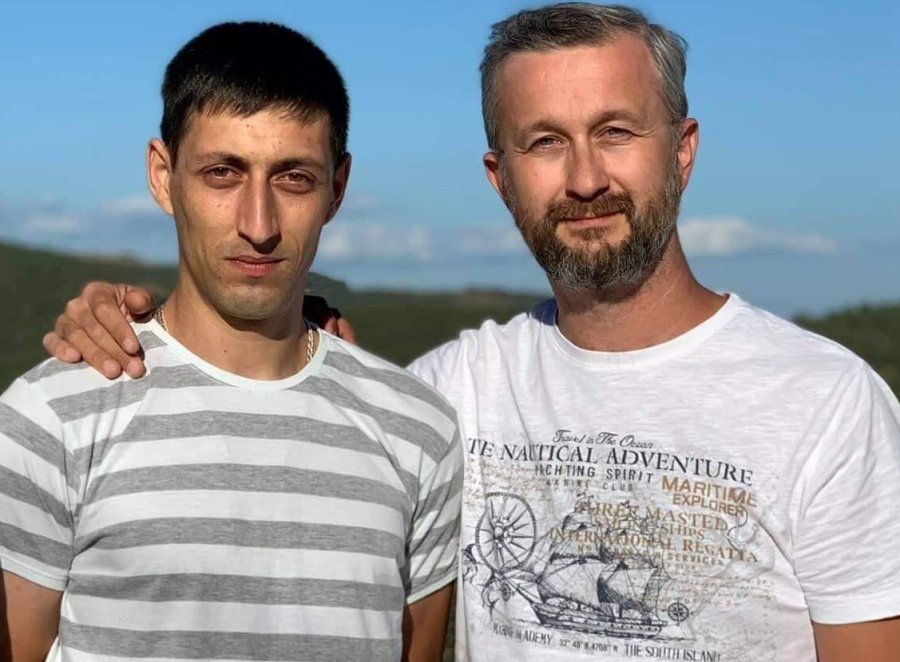 Asan Akhtemov has been held prisoner in a ‘quarantine cell’ in occupied Simferopol for 44 days without any medical grounds, yet with no end in sight. Initially the move seemed aimed solely at making it difficult to record evidence of the torture believed to have been used to extract a videoed ‘confession’.  Akhtemov’s lawyers assume that the FSB are continuing to hold him in supposed ‘quarantine’ in order to escalate the pressure on him, through maximum isolation and especially intolerable conditions.  Asan Akhtemov and his cousin Aziz Akhtemov were seized on 4 September, just hours before the arrest of Crimean Tatar Mejlis leader Nariman Dzhelyal and the only ‘evidence’ for the absurd ‘sabotage’ charges laid against them are the ‘confessions’ from the two cousins made while they were held incommunicado and prevented from seeing independent lawyers.

One of Asan Akhtemov’s lawyers, Aider Azamatov reported on 20 October that they had visited him in the SIZO [remand prison].  He noted that normal quarantine lasts no more than 14 days, making the then 43 days an absolute record-breaker.  This, he says, is a clear indicator that such unlawful methods are being used to put pressure on Akhtemov.  The latter retracted ‘a confession’ extracted through torture, and is now being treated “accordingly”.  The excuse of ‘quarantine’ makes it possible to make the conditions in the Simferopol SIZO which are already tantamount to torture even worse. As Azamatov reports, the food in the SIZO is so inedible that prisoners survive thanks to food parcels provided by their families.  Akhtemov’s wife last handed in such a food parcel for her husband on 16 October, however Akhtemov reports that he received nothing. Instead, he was brought two bars, with a 2010 date on them, as well as mould. Earlier, when his family passed on vital medication for him, he was simply handed a little slip with some tablets on it.  His lawyers are preparing formal complaints over such theft of his food and medication.

Akhtemov has clearly not been cowered into retracting his formal complaint of torture, and Azamatov spent some time giving him advice regarding a scheduled visit from the military prosecutor in connection with the application for a check lodged by Asan’s father and lawyers.  The latter specifically stressed that he should only answer the prosecutor in the presence of his lawyer in order to avoid other forms of pressure from SIZO staff.

There are several levels at which this case, the imprisonment of three Crimean Tatars and likely huge ‘sentences’ seem to be all about revenge.

Asan Akhtemov is facing such exceptionally intolerable treatment in the SIZO in part, at least, in revenge for his courage in retracting the ‘confession’ and detailed account of the torture used to obtain it.  See: “Shoot me now!” Harrowing details of Russian FSB torture of Crimean Tatars seized in revenge for 'Crimea Platform'

Nariman Dzhelyal had been fearless in speaking out about rights abuses and repression in occupied Crimea.  It was he who first called on fellow Crimeans to provide urgently needed clothes, and other help, to the 24 Ukrainian seamen whom Russia seized in November 2018.  Dzhelyal was also one of the Crimean Tatar leaders present at the inaugural meeting of the Crimea Platform in Kyiv on 23 August – the day that Russia is claiming the ‘sabotage attack’ on a small and obscure gas pipe took place.  Russia had reacted with hysteria to the Crimea Platform and particularly the participation of high-ranking representatives of around 45 states, and Dzhelyal and others had been threatened with ‘consequences’ if they participated.

Russia’s revenge against the Mejlis, or self-governing body, of the Crimean Tatar people, should also be borne in mind.  Repression against the Mejlis itself, and its leaders, began as soon as Moscow understood that the Mejlis, and vast majority of Crimean Tatars whom it represented, identified with Ukraine and strongly opposed Russia’s invasion and occupation of Crimea. For the last four years, Russia has refused to comply with an order from the UN International Court of Justice to withdraw the ban imposed on the Mejlis in 2016.  Instead, it appears to be intensifying repression and, perhaps, seeking to claim that the Mejlis is involved in ‘terrorism’ (not just ‘extremist activities’, as per the ruling in 2016).

Five men were effectively abducted by the FSB on 3 and 4 September 2021, with the armed raids on the two Akhtemov homes carried out in the night.  There could be no good reason for such behaviour given that the alleged ‘act of sabotage’ had taken place on 23 August, and there had been no mention of it since then. All mobile telephones were immediately taken away so that lawyers and family were not informed of the raids.  Even the whereabouts of the Akhtemovs, Dzhelyal and the other two men were unknown until late in the evening on 4 September, and neither of the two Akhtemovs were able to see their own lawyers for almost 10 days.  This, in fact, was only after the European Court of Human Rights [ECHR] intervened.

It became clear on 5 September that the Akhtemovs were accused of carrying out an act of sabotage for Ukrainian Military Intelligence and the Mejlis, while Dzhelyal was supposed to have ‘abetted’ them.  The charges were first escalated against Asan Akhtemov after he retracted his videoed ‘confession’ and explained in detail the torture used to obtain it.   Then on 22 September, the charges against Dzhelyal and, probably, the Akhtemovs, were increased again, with the men all facing sentences of up to 20 years.

It remains in question whether there ever was an act of sabotage, with the damage to a local gas pipe quite possibly no more than an act of vandalism.  Any ‘evidence’ against the Akhtemovs that did not come from ‘confessions’ tortured out of them would seem to be from at least one ‘anonymous witness’, whose identity is not known and whose testimony can in no way be verified. The obvious targeting of Dzhelyal and clear irregularities in the case have elicited international outrage, with demands for the release of all the men from the EU; US State Department; from Human Rights Watch; FIDH [the International Federation for Human Rights] and others