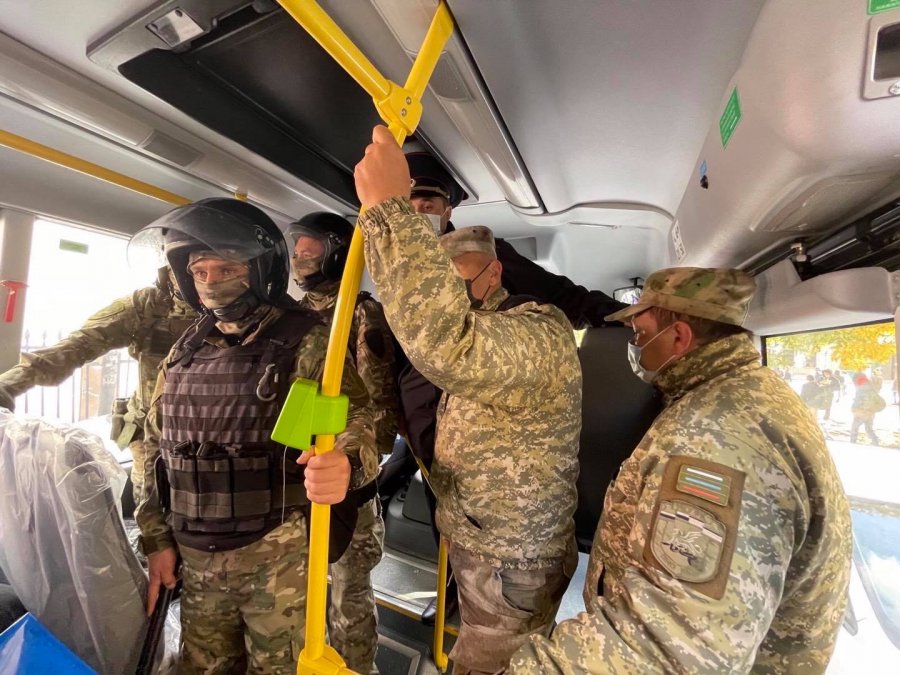 ‘Judges’ from a Russian-controlled court in occupied Crimea spent 26 October imposing fairly large fines for entirely fabricated ‘infringements’ by Crimean Tatar civic journalists; the coordinator of Crimean Solidarity and other activists, as well as by lawyer Edem Semedlyaev, who was detained while representing others taken into custody.  All the hearings took place at the Central District Court, with around four acquittals.  It is an indication of the judicial degradation under Russian occupation, that these were the startling part of the day, not the imprisonment of 22 men for 24 hours and fines imposed against men who had simply gathered outside a court, observing all the relevant pandemic-related requirements..

Two administrative prosecutions for supposedly ‘disobeying an enforcement officer’s lawful order’ (Article 19.3 of Russia’s Code of administrative offences, or CAO) were laid against Edem Semedlyaev on 25 October: first, after he tried to record the illegal decision to draw up an administrative protocol against one of the men detained, without a lawyer. The second was over Semedlyaev’s refusal to obey the extraordinary demand that he strip naked.  It was the protocol over the latter that ‘judge’ Sergei Demenok from the occupation Central District Court in Simferopol refused to accept due to mistakes.  He did not, however, state clearly that there could be nothing lawful about the demand from the head of the so-called Centre for countering extremism, Ruslan Renatovich Shambazov, that a lawyer, already illegally detained while representing a client, strip naked, especially when this is something which Semedlyaev’s Muslim faith does not allow.  The protocol has merely been returned for mistakes to be corrected, and could reappear.  There was seemingly no verdict on the first administrative case, however Semedlyaev was, at least, released.

Dilyaver Memetov, one of the coordinators of Crimean Solidarity, was ‘found guilty’ of the administrative offence under Article 20.2.2 of the CAO, namely ‘organizing a mass presence at the same time of citizens in public places, bringing about an infringement of public order’.   This was the second such ‘conviction’ against Memetov in the space of a month, with the fine this time 15 thousand roubles.  Russia is still using a thoroughly flawed norm (applied to imprison activists Ildar Dadin and Konstantin Kotov) which enables the authorities to prosecute and imprison, for up to five years, a person who has received three such administrative convictions within six months.  For showing solidarity with Crimean Tatar political prisoners, you can pick up three such ‘convictions’ within a much shorter space of time.

The vital Crimean Solidarity civic initiative arose from the mounting persecution of Crimean Tatars under Russian occupation, and Dilyaver himself is the son of Remzi Memetov, a recognized political prisoner serving a nine-year prison sentence without any crime.

Dilyaver Memetov reports that the ‘court’ ignored all their comments about the violation of their rights and of the law. They had been detained and held overnight in appalling conditions and the protocols drawn up contained glaring falsehoods.  Dilyaver notes that he himself was not on the police photos and there are witnesses who can confirm that he wore a mask and maintained full social distancing throughout.

“We consider that this is the latest attempt by the state to obstruct gatherings of people who gather in order to show support for their dear ones. For the authorities, this is not needed, especially among the Crimean Tatar people.”

Two Crimean Solidarity civic journalists – Ruslan Paralamov and Dlyaver Ibragimov were found ‘guilty’, although they had been there reporting on the events. The ‘court’ did, however, ‘acquit’ Grani-.ru journalist and Crimean Solidarity activist Zidan Adzhiyediamov, as well as about three of the 21 men detained on 25 October.

Crimean Tatar unity is indeed a major irritant to the Russian occupiers, and the latter have come down heavily upon the civic initiative Crimean Solidarity, especially because of the vital role it plays in providing information about repression in Crimea.  Russia has imprisoned at least ten Crimean Tatar and other Ukrainian journalists, as well as a very large number of civic activists, and it has for some time now come down very hard on any Crimean Tatars, even members of political prisoners’ families who publicly demonstrate their support for them.  The mothers of political prisoners have faced prosecution and fines for single-person pickets in defence of their sons, and the FSB have twice effectively stopped only Crimean Tatars from crossing from Crimea into Russia (via the illegal Kerch Bridge) so that they could not be present outside the court in Rostov passing huge sentences on Crimean Tatar political prisoners.

There have been mass detentions three times since 4 September when a huge number of relatives and other Crimean Tatars gathered outside the FSB, trying to find out the whereabouts of five men, including Crimean Tatar Mejlis leader and journalist Nariman Dzhelyal, who had disappeared after armed searches of their homes.

The terror, clearly aimed at crushing Crimean Tatar unity, has probably only strengthened it.