Only 0.09% of schoolkids study in Ukrainian in Russian-occupied Crimea despite Hague Court order Russia uses threats & intimidation to drive Crimean Tatar language out of schools in occupied CrimeaRussia has eliminated all classes taught in Ukrainian since its annexation of Crimea“We’re not celebrating today” – digest of Russian protests (early June 2022)High-ranking Russian officials openly incite to genocide against Ukraine ECHR rules too late against Russia’s notorious ‘foreign agent’ law and hardly moves over violations in occupied Crimea Tortured body found of Ukrainian patriot seized by the Russian invaders of Kherson Young Crimean Tatar likely tortured into ‘confessing’ to anti-war protest Mariupol in danger of cholera outbreak, but Russian invaders concentrate on removing signs in Ukrainian “We can"t clean ourselves from the blood” – digest of Russian protestsInternational experts issue stark warning of Russian genocide against Ukraine“Fight poverty, not Ukraine” – digest of Russian protestsProhibited remembrance of Crimean Tatar genocide and mounting terror in Russian occupied Crimea A resident of Mariupol is telling how she found civilians killed by a sniper“I will not fear ZEvil”– digest of Russian protestsRussian invaders destroy Ukrainian hospitals, plundering medical equipment and abducting medical staff Even in Russia, Putin’s ‘denazification’ claims prove no excuse for war against UkraineRussia uses terror and abduction in attempt to force schools to collaborate in occupied Melitopol Oksana Stomina: This is medieval cruelty, multiplied by the modern possibilities and sick, maniacal ambitions‘Back in the day Shoygu and I saved Neftegorsk after an earthquake and now he turns Mariupol into it’
• Topics / Human Rights Abuses in Russian-occupied Crimea 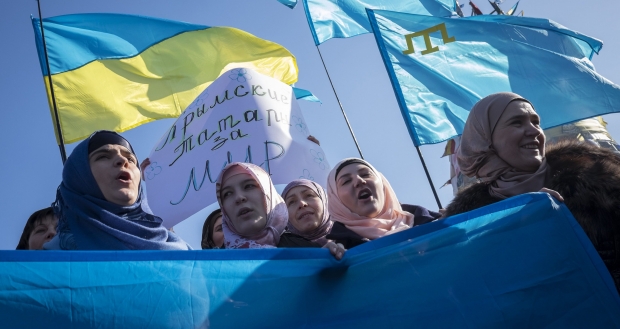 While constantly demanding official status for the Russian language in Ukraine and claiming that Russian speakers face ‘discrimination’, Russia has not included Ukrainian in the list of languages which can be used in completing its 2021 census. The latter is illegal in any case since it is being held in occupied Crimea, but the omission is telling.

According to the 2010 census, before Russia’s invasion and annexation of Crimea, there were close on two million Ukrainians in the Russian Federation, with this making them the third largest ethnic group in the country.  Russian officials would doubtless claim that no Ukrainian option of the census is required as “all Ukrainians speak Russian”.  This, however, is surely a direct result of Russia’s chauvinist education system and the lack of any schools teaching in Ukrainian.  Moscow does, however, shout ‘discrimination’ and ‘persecution’ whenever Ukraine implements legitimate requirements, such as that children learn Ukrainian and that the latter is the language used by state bodies.

Ekho Moskvy journalist Alexei Naryshkin, who posted a screenshot of the electronic census form, with Ukrainian not included, writes that there are ten possible languages: Bashkir; Buryat; Chinese; Chuvash; English; Korean; Uzbek and the Yakut language. The list seems rather strange, and undoubtedly excludes many indigenous peoples of the Russian Federation whose languages have been increasingly stifled over recent years.

As mentioned, any result of this ‘census’, which began on 15 October, is already illegitimate as Russia, as an occupying state, has no right to hold it in occupied Crimea. The move has not just been condemned by Kyiv. In a statement on 15 October, the European Union was scathing about both the census and the latest illegal conscription campaign in occupied Crimea.  It wrote that:

“These actions are an attempt to legitimise the illegal annexation of Crimea and further undermine the sovereignty and territorial integrity of Ukraine within its internationally recognised borders.”

Russia is currently dragging out proceedings at the UN’s International Court of Justice at the Hague with one of the claims that Ukraine has brought being over Russia’s alleged violation of the International Convention on the Elimination of All Forms of Racial Discrimination against Crimean Tatars and ethnic Ukrainians in occupied Crimea.  It has its reasons, albeit illegitimate, since it is continuing to flout the Court provisional measures from 2017, ordering Russia to withdraw its ban of the Mejlis (self-governing body) of the Crimean Tatar people and to ensure the availability in education of the Ukrainian language in occupied Crimea.

Instead of ending its discrimination of both ethnic Ukrainians and Crimean Tatars, it opted for pretence and doctored statistics. A ‘law’ passed by the occupation regime in 2017, recognizing three official languages in occupied Crimea – Ukrainian, Crimean Tatar and Russia – is a mere façade, as several Crimean Tatar political prisoners discovered recently when they were thrown out of their own ‘trial’ for insisting on speaking Crimean Tatar.

In a report about the human rights situation in Crimea after seven years of occupation, the Crimean Human Rights Group and other NGOs reported a catastrophic fall in the number of schoolchildren studying in Ukrainian.  The number of students was 36 times lower than in 2014, while the number of classes with teaching in Ukrainian had fallen by 31 times.  There was a sharp decrease in all options for education in Ukrainian, and even for learning Ukrainian as a subject.

According to the Russian occupation statistics, the percentage of children studying in Crimean Tatar has not changed significantly, however NGOs dispute these statistics and say that the education “in Crimean Tatar” is on paper alone.  Back in 2019, the Crimean Human Rights Group demonstrated how the statistics lie.  In three schools they monitored, where classes were supposed to be taught in Crimean Tatar, only some lessons were not in Russian.   In one of the schools, Crimean Tatar as a separate subject was taught only up to the ninth grade (not the tenth and eleventh).  10 of the 18 schools visited, which were claimed by the ‘ministry’ to have classes in Crimean Tatar, had signs in front of the schools only in Russian.