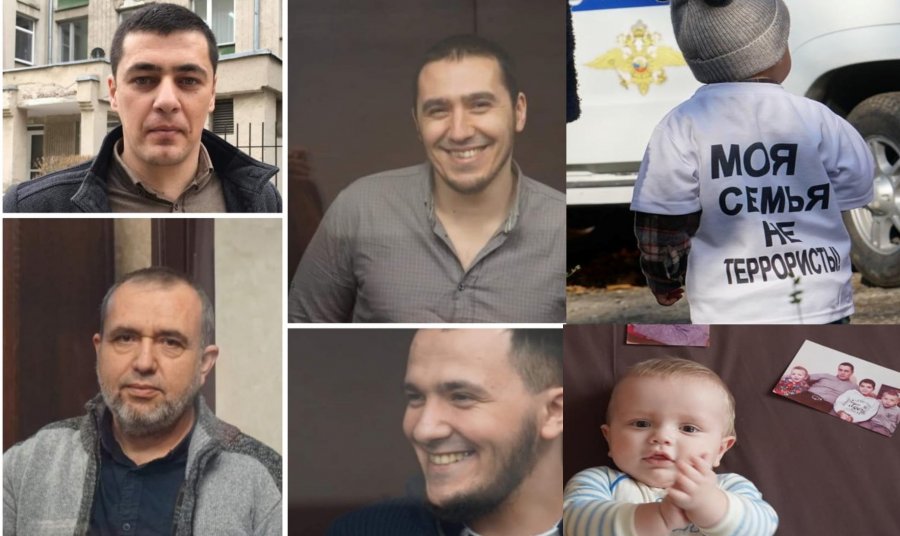 A Russian court has passed appalling sentences against two sons of a renowned Crimean Tatar historian and their uncle, as well as against a civic journalist with a life-threatening heart condition.  The four recognized political prisoners received terms of imprisonment from 12 to 17 years on charges that are eerily similar to that used during Stalin’s Terror against the two brothers’ great-grandfather.  The latter was executed in 1938 for what the NKVD called ‘counter-revolutionary terrorist propaganda’ (and posthumously ‘rehabilitated’ in 1990)  Seitumer Seitumerov; Osman Seitumerov; their uncle Rustem Seitmemetov and journalist Amet Suleimanov are charged with ‘terrorism’, although none is accused of a recognizable crime and the enforcement officers who burst into their homes on 11 March 2020 never pretended to be looking for anything except ‘prohibited literature’.  ‘Looking for’ is hardly an appropriate term since the FSB brought the literature with them, and, having illegally prevented lawyers from being present and local residents from acting as independent witnesses, claimed to have ‘found’ these in the men’s homes.  Nothing else was sought, and the ‘terrorism’ charges are based solely on religious literature, two conversations in a mosque back in 2017, and two ‘secret witnesses’ who appeared unable to distinguish one defendant from another.

Despite this, three ‘judges’ from the Southern District Military Court in Rostov (Russia) -  Igor Kostin (presiding judge); Roman Plisko and Yevgeny Zviagin - on 29 October sentenced four innocent men to the following terms of imprisonment.  In each case, the sentences are to the harshest of Russian prison colonies, with the first years spent in a prison, the absolute worst of Russia’s penal institutions.

Seitumer Seitumerov  - 17 years’ imprisonment, with the first 3.5 years in a prison and restriction of liberty (following his release) of 1.5 years;

Osman Seitumerov  - 14 years’ imprisonment, with the first 3.5 years in a prison and restriction of liberty (following his release) of 1 year;

Rustem Seitmemetov  - 13 years’ imprisonment, with the first 3.5 years in a prison and restriction of liberty (following his release) of 1 year;

Amet Suleimanov  - 12 years’ imprisonment, with the first 3.5 years in a prison and restriction of liberty (following his release) of 1 year.

The last is a death sentence since Suleimanov suffers from a number of life-threatening heart conditions.  These were serious enough for occupation ‘courts’ to place him under house arrest, rather than in custody.  Despite this, prosecutor Igor Nadolinsky had previously tried to get him remanded in custody and had demanded a 13-year sentence.  Even house arrest had prevented him from having an urgently needed operation, and there is effectively no chance that he would survive even the first years in a Russian prison.

During their final addresses to the court on 27 October, the men pointed out the absurdity of the charges against them, as well as the real crimes that Russia’s FSB miss while expending money and men on persecuting civic activists, journalists and, generally, any devout Muslims in occupied Crimea.  Under Russian occupation, FSB officers, including the turncoats who betrayed their oath to Ukraine, can easily ramp up their statistics on ‘fighting terrorism’ and expect promotion or bonuses by copy-pasting ‘terrorism prosecutions’ against law-abiding Crimean Tatars with no risk to themselves, and minimal effort.  Why would they instead bother to try to pre-empt mass killings, like those in Kerch or Perm (Russia), where the young men’s purchase of weapons or violent social media posts should have sent alarm bells ringing?

The ‘terrorism’ charges against all four men are based solely on a secretive 2003 Russian Supreme Court ruling which labelled the peaceful pan-Muslim Hizb ut-Tahrir  party ‘terrorist’.  No explanation was provided then for why an organization not known to have committed acts of terrorism anywhere in the world should be called ‘terrorism’, and until 2016 (when joined by the repressive regime in Uzbekistan) Russia was the only country in the world to take this position. In Ukraine (and most European countries), Hizb ut-Tahrir  is legal.

Seven homes were subjected to early-morning armed raids on 11 March 2020, including that of the parents of another journalist, also called Seitumer Seitumerov, who is fortunately safely in mainland Ukraine.  It was initially reported that only the latter was charged under the more serious Article 205.5 § 1 of Russia’s criminal code with ‘organizing a Hizb ut-Tahrir group’.  It is now clear, however, that the elder of the two brothers, Seitumer Seitumerov (b. 1988, and, like his father, a historian) also faced the worse charge which carries a significantly higher sentence (in occupied Crimea, thus far, up to 20 years).  The other three men: Osman Seitumerov (b. 1992); Rustem Seitmemetov (b. 1973) and Amet Suleimanov (b. 1984) are charged with ‘involvement’ in a Hizb ut-Tahrir group, under Article 205.5 § 2, with the sentences for this from 10 to 20 years.  All of the men are also charged with ‘planning a violent uprising’ (Article 278) although even the FSB admit that not one of them is suspected of actions or direct plans to commit any action aimed at ‘overthrowing the Russian constitutional order’

These sentences have been getting longer and longer, despite identical charges.  Since 2017, all such arrests have largely targeted civic activists and journalists, especially those involved in the civic initiative Crimean Solidarity.  This case is no exception.  Suleimanov was a Crimean Solidarity journalist who streamed information about arrests and political trials onto the Internet and, like many others, had faced administrative prosecution (in October 2017) for such legal reporting.  Shortly before his arrest, he had been forced to curtail such activities due to life-threatening rheumatic heart disease, aortic insufficiency, coronary artery disease and other conditions.  The Seitumerov brothers had both attended political trials, sent food parcels to political prisoners and helped their families.

These prosecutions are particularly shocking as all that the FSB and prosecutor need to do is ‘prove’ involvement in Hizb ut-Tahrir , with such proof typically provided by ‘linguistic analyses’ by FSB-loyal ‘experts’ of conversations which do not once mention Hizb ut-Tahrir, as well as by planted ‘prohibited literature’ and by anonymous witnesses.  In his final address, Seitmemetov noted that these supposed ‘witnesses’ whose testimony cannot be verified are used to fill in the gaps in FSB prosecutions.  In this case, as in all others, it is only such secret individuals and the FSB, often men who themselves in 2014, betrayed their native country, who testify against the defendants.

The two conversations in this case, which supposedly provide proof for the terrorism charges, were illicitly taped in a Bakhchysarai  mosque back in 2017.  It is hard to take the ‘terrorism’ claims seriously if the FSB saw no reason to carry out searches and arrests for three whole years.  One of the conversations was on a religious theme, regarding Judgement Day and people’s responsibility for their actions. The second touches on history, and specifically, the act of genocide against the Crimean Tatar people in 1944, i.e. the Deportation., and how nobody has been held to account.

The so-called ‘expert’ in this case, a certain Larisa Teslenko, added words that were not actually said, and claimed that the men’s utterances warranted a negative interpretation, in line with the prosecution’s charges  men’s utterances a negative interpretation in line with the prosecution’s charges, but not what they had heard.
There are two ‘secret witnesses’ whose identity is, in fact, known, as is the minimum number of similar ‘trials’ where they have been used to convict defendants and get them sentenced to up to 19 years. Konstantin Tumarevich is a fugitive from justice in his native Latvia, and, without the appropriate papers, had every reason to cooperate with the FSB to avoid being deported.  The same applies to Nazrulayev Salakhutdin (or Salakhuddin), who did not want to be forcibly returned to Uzbekistan.

Russia is using such individuals to justify imprisoning men who have committed no crime for up to 20 years.  This is despite a European Court of Human Rights judgement which found that Russia’s dependence on such testimony is a violation of the right to a fair trial and strong criticism from the UN Secretary General.

The above-mentioned ‘expert’ and ‘secret witnesses’ must be aware that they are providing their services to imprison innocent men.  The same is undoubtedly true of prosecutor Igor Nadolinsky who, on 20 September, demanded horrific sentences (Seitumer Seitumerov – 20 years; Osman Seitumerov – 17 years; their uncle Rustem Seitmemetov – 16 years and Amet Suleimanov – 13 years, and of the three ‘judges( Igor Kostin,  Roman Plisko and Yevgeny Zviagin who on 29 October 2021 took all of ten minutes to pass monstrous sentences.  Kostin, as presiding judge, had earlier repeatedly obstructed legitimate questions to the ‘secret witnesses’ and in other ways demonstrated that this was no objective trial.

All four men are recognized by the renowned Memorial Human Rights Centre as political prisoners.  Their release has also been demanded in numerous resolutions from the European Parliament; OSCE and other international bodies. All cite, as did the men in their final addresses, international law (in particular, the Fourth Geneva Convention) which prohibit Russia from applying its legislation on occupied territory and forcibly moving the men to Russia.

PLEASE WRITE TO OSMAN AND SEITUMER SEITUMEROV AND TO RUSTEM SEITMEMETOV IN RUSSIA!   (Amet Suleimanov remains for now under house arrest in occupied Crimea.