Russia finances war in Donbas, but ignores the environmental disaster its proxy ‘republics’ are causing Ukraine 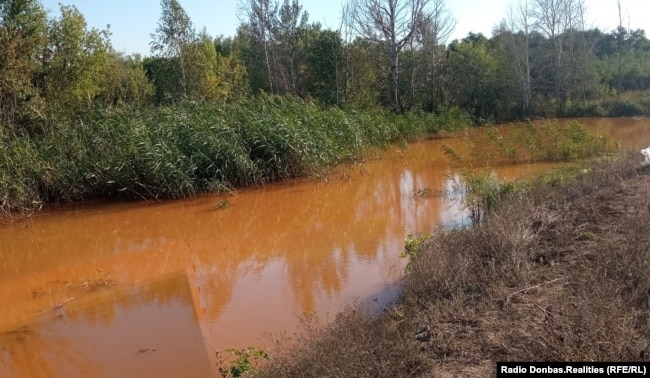 There are environmental consequences of any conflict, however the situation in occupied Donbas is especially urgent due to the large number of mines and the fact that the vast majority of these (around 70 of the total 94) ended up on the territory of the Russian proxy ‘republics’ (the so-called ‘Luhansk and Donetsk people’s republics’ or L/DPR).  More than 70% of these have been closed, and there are grounds for fearing that crucial measures are not being taken to ensure the constant pumping out of subterranean waters.  Without this, other mines in both government-controlled and occupied Donbas could end up flooded, as well contamination of drinking water supplies and other disastrous effects to the environment.

Almost eight years after the beginning of the war in Donbas, a group on environmental monitoring and exchange of information has been created within the framework of the Tripartite Contact Group.  This is, certainly, an achievement, yet may not be enough to combat very real threats to people’s lives, well-being and property both on occupied territory and beyond.

The LDPR militants have only acknowledged stopping the pumping of water from the Yunkom former coalmine, however, according to the experts interviewed by News of Donbas, there are grounds for assuming that other mines have also been flooded.

This seems likely as the openness about Yunkom was doubtless because there was simply no possibility of concealing such dangerous plans for a mine that had been used for a nuclear test in 1979.  The danger of radioactive contamination of soil and water sources was, and presumably remains, very real. In April 2018, ‘DPR’ shut down some of the pumps, claiming that they were too expensive to maintain.  Russia is spending vast amounts on its military expansion and on propping up the so-called ‘republics’, but clearly chose to ignore this danger. Nor is the risk confined only to Yunkom, since there are a number of hydraulically interconnected mines, some of which the militants began flooding in 2017.

Essentially any disused mine is a potential danger, and there need to be water pumps in place constantly pumping out subterraneous waters to prevent the flooding of other mines  This is a permanent process, with water pumps constantly working at the Novaya mine over 15 years after its closure in 2006. The problem is, however, that the plans drawn up years before Russia’s aggression and the appearance of a front in Donbas, envisaged that the pumping would be carried out by the Lenin Mine in Horlivka.  The latter is now part of ‘DPR’ and those in control there are not fulfilling this role.

Hydrogeologist Yevhen Yakovlev has been sounding the alarm for a long time now.  Although Russia and its proxy ‘republics’ are now showing little interest in addressing an immediate problem, Yakovlev noted earlier that successive Ukrainian governments had delayed developing the costly pumping system needed as coal mines began closing in the early 2000s. He says that there needs to be a joint system for monitoring the situation and regulating the system for closing mines both in occupied Donbas, and in areas under government control.

At present, however, there is none, and it is noticeable that the experts that News of Donbas spoke with cite reports on social media about cases of subsidence in high-risk cities under militant control like Makiyivka and Horlivka.  Volodymyr Yemets from the New City NGO points out that these cities, as well as Yenakiyeve and Toretsk, are located over mined areas, and there are already signs of trouble (cracks in houses in Makiyivka, flooding of buildings in Donetsk, reservoirs drying up, etc.

Radio Svoboda’s ‘Donbas Realities’ describes the danger through the example of Zolote, a town in the Luhansk oblast under government control, but dangerously near the front at surface level, and all too close to abandoned mines underground.

In May 2018, water surged into the  Zolote Mine, with the amount of water instantly doubling. There were 60 miners underground who were at least rescued from what was described as like a river.

The mine had already received all of the water from the flooded Rodina mine which is between the Ukrainian Armed Forces positions and the militants.  The surge came, however, from the Pervomaiska and Holubivska mines, now under militant control.  No coal is now being mined at Zolote, but the danger of a huge water surge which the Zolote Mine will be unable to withstand remains.

There is nothing theoretical about this, as the authors demonstrate through a photo of the local river Kamyshevakha, as well as reports of subsidence in both Zolote and Hirske.  The local school, for example, is constantly needing repairs.  According to the head of the Hirske Military-Civil Administration, Oleksiy Babchenko, the pumps and pipes at the Zolote Mine are not being repaired, and the situation could become truly critical.

“They’re already finding traces of iron ore from Alchevsk in the water. If the mine water continues coming like this and nothing is done, it will rise to the level of ground water and will push out water from wells, flow into rives and our arterial water system, the Northern Donetsk, will become unsuitable for use”, Babchenko warns.

According to Volodymyr Shishkin, the Deputy Technical Director of the Pervomaiskvuhillya company, they are, for now, managing to withstand the incoming flow of underground water, however the latter is so aggressive that it is wearing down the equipment and a reserve needs to be created.

The water in the river is the colour of red ore, yet locals continue fishing.  As local journalist Volodymyr Zaruba told the Donbas Realities correspondents, for now locals are most concerned that the mine continues to provide them with work, not the environmental issues.  Although politicians do mention the environment, they do not fully reveal the extent of the real danger.

Treatment plants capable of dealing with vast amounts of dirty water could cost up to hundreds of millions of UAH, and at present the oblast is planning to seek the money from international donors.  Negotiations are reportedly underway with the United Nations Development Programme [UNDP]; ACTED Norwegian Refugee Council, ACTED (the Agency for Technical Cooperation and Development) and the Norwegian Refugee Council.